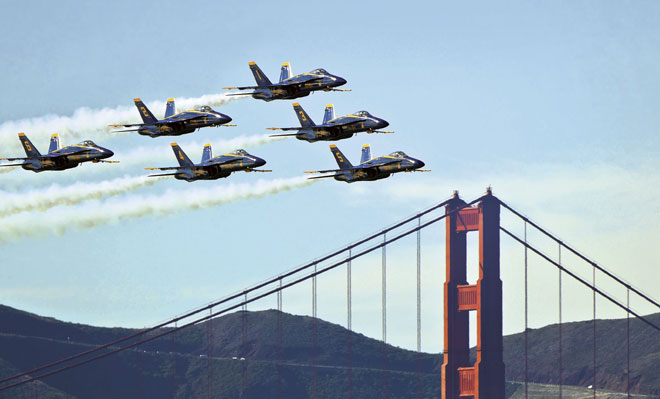 It all started in San Diego back in 1935, after the first world war and before the second, when President Franklin D. Roosevelt decided it was time to beef up the U.S. Navy. That June, under orders to strut their stuff and help generate interest, some 3,000 commissioned military officers and 55,000 enlisted men brought more than 100 warships and 400 military planes to San Diego during the California Pacific International Exposition, opened vessels to tours and put on spectacular air shows. Thus began Fleet Week, and various waterfront cities around the nation have held celebrations since.

San Francisco got serious about its Fleet Week in 1981, and it has since become a gold standard for other cities’ events, bringing some 1 million people into the city for a long weekend. San Francisco’s Fleet Week takes place on the extended Columbus Day weekend. (The event runs Oct. 5–12 this year, with the concentration of events on Friday, Saturday, Sunday and dwindling by Monday.) It brings crowds to the Marina-Fisherman’s Wharf area for its air show (the Navy’s Blue Angels perform at several points during the event), parade of ships and vessel tours, and demonstrations of working canines and interactive disaster preparedness routines at the Humanitarian Village held at Marina Green Park.

PARK THE CAR AND FORGET ABOUT IT—This is San Francisco. What’s more, it’s San Francisco on a holiday weekend during a traditionally beautiful-weather month. The city will be packed. Ditch the car somewhere else—across the bay, preferably—and ferry or BART in. It takes some planning, but riding the city’s public transportation system, with its streetcars and buses and cable cars, far surpasses trying to do it yourself, even with navigation and someone directionally gifted riding shotgun. A taxi is one of the cheapest ways to get from Point A to Point B—even cheaper than Uber last time we were there—and perfect for those few-block stretches that might involve cumbersome bus transfers or steep-steep hills or when those strappy sandals aren’t going another step.

RESERVE A SEAT—The air show, headlined by the Blue Angels and including performances by the U.S. Coast Guard, the Navy Leap Frogs, The Patriots jet team and others, draws the biggest crowds, and people line the waterfront every afternoon angling for a glimpse. For about 50 bucks, you can guarantee you’ve got a seat in the shoreline grandstand. The chair is yours for the day, which allows you to wander among the exhibits and concessions, then come sink down to watch the show as you wish.

GET AN EDUCATION AT THE HUMANITARIAN VILLAGE—San Francisco’s Fleet Week is a model for other Fleet Week celebrations around the country in part because of its focus on military-civilian collaboration in disaster preparedness. At the Humanitarian Village, get involved: A passport guides you through four theme camps, including mass care and shelter (think pop-up hospitals), environmental management and decontamination (you might get a sip of desalinated sea water), and power and utilities (discover the glory in generators). By the end of the event, you’ll have mad skills and a new appreciation for dogs, and you might be giving serious thought to formulating an actual plan for the day the next big earthquake hits.

TOUR THE SHIPS—The parade of ships kicks off the event, with each participating boat crossing beneath the Golden Gate to enter the bay. They’ll glide through on Friday morning, usually between 10 and 11 o’clock, and each one parks at its designated pier along the Embarcadero and opens to the public for free tours during specific hours over the next several days. Alcatraz Island provides one of the best viewing spots for the parade—reserve an early-morning spot on the Alcatraz ferry and you’ll be perfectly positioned out at the rock. Get prepared before you tour the ships parked at the piers: Keep up with the Fleet Week website to check for tour times, which often shift, and take heed of rules, which may include showing government identification, wearing closed-toe shoes and bringing no children younger than 8. Also, arrive early and expect to wait in line. Show up late and you could be looking at a three-hour wait, and imagine how mad you’d be if you got turned away because you’re wearing flip-flops.

WALK THE WATERFRONT—One of the greatest ways to experience Fleet Week is to walk the water’s edge from the Presidio to the St. Francis Yacht Club harbor, through Fort Mason and Aquatic Park. This stroll provides a premier vantage point to see the boats bobbing on the bay—multiplied exponentially during Fleet Week—and, best of all, a way to view the afternoon air shows for free. Expect lots of picnickers, exercisers and dogs. On Sunday morning, the Fort Mason farmers market makes a great grub stop; also in Fort Mason, Readers Bookstore and Goody Cafe sells darn good coffee and carries a varied selection of books, all to benefit the Friends of the San Francisco Public Library; drop in when the sun feels too bright and take a break. Try for a seat at Greens, the gorgeous and famous vegetarian restaurant at Fort Mason, where views of the harbor and the Golden Gate Bridge from the light-splashed dining room invite you to linger.

PEEK AT PRACTICE—The Blue Angels practice on Thursday and Friday afternoons, treating San Francisco to air show previews between noon and 4 or 5 p.m.

GET OUT ON THE WATER—Book a cruise on any of the tour boats that operate out of Pier 39 or Fisherman’s Wharf. Red and White Fleet runs two-and-a-half-hour air show cruises Friday, Saturday and Sunday afternoons for $70; picnic fare is included. Blue & Gold Fleet’s air show cruises run each afternoon as well, and the $85 ticket includes a buffet lunch and a hosted full bar. Another option: the $120 brunch aboard Hornblower Cruises & Events’ San Francisco Belle, with unlimited champagne, Irish coffee and other libations, available Saturday and Sunday. Hornblower also runs an air show practice lunch cruise on Friday for $85.

TAKE IT IN AT PIER 39—The always-bustling tourist destination heaves with even more activity during Fleet Week, with military demonstrations and live musical entertainment. Pier 39’s back deck is a prime spot for you to watch the air show, fish and chips or ice cream cone in hand.

SPEND THE NIGHT NEARBY—About a mile from Marina Green Park, the Argonaut Hotel, right across from Hyde Street Pier, has the perfect decor for a boat-themed weekend. With rich nautical colors—navy, deep red, golden-yellow—and maritime accents such as anchors and compasses and ship’s wheels, it’s a boutique hotel with rates that start around $230 a night. Also in the vicinity, the Fairmont Heritage Place at Ghirardelli Square makes an ideal home away from home, with one-, two- and three-bedroom residences situated conveniently above the Ghirardelli Chocolate Factory storefront across from Aquatic Park.

Just across the bay, Tiburon awaits. With a waterfront of shops, galleries and restaurants, and the Tiburon-Angel Island ferry also running air show cruises the afternoons of Oct. 10 and 11, the community allows you to experience a bit of Fleet Week without the intensity of the mob scene. You’ll miss the ship tours and the booths and military fanfare, but you can catch the air show either from the ferry, the shoreline park (rent some bikes from Demo Sport to pedal along the path) or the deck at Sam’s Anchor Cafe (the best spot in town for a ridiculously large weekend brunch and too much coffee).

Stay at The Lodge at Tiburon near the village or right on the bay at the pretty Waters Edge Hotel. Waters Edge is smaller, with 23 guest rooms, each with a fireplace, and the continental breakfast adds to the value—room rates start at about $270 a night. The Lodge at Tiburon, with 103 rooms and rates beginning around $200, includes a poolside fire pit and patio perfect for winding down with a glass of wine.

Along the waterfront, with events at Marina Green Park, Pier 39 and various piers on the Embarcadero