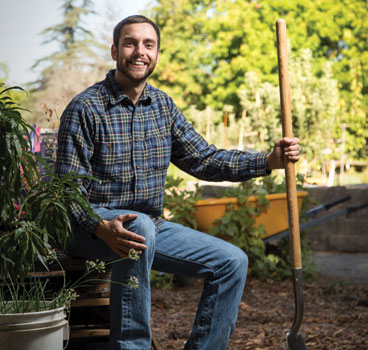 When Mayor Kevin Johnson teamed up with Alice Waters, owner of Chez Panisse in Berkeley, big things started happening at Sacramento Charter High School. Big things in the form of dirty hands and shovels and seeds, and eventually a bounty of veggies. Called edible Sac High, the project-based learning program uses gardening and food preparation as a hands-on approach to combat junk food habits and obesity, and to teach a joy of gardening. Inspired by Waters’ edible Schoolyards Project, which began in 1996 at Martin Luther King Jr. Middle School in Berkeley, the program at Sac High kicked off in 2012. Meet Nick Anicich, edible Sac High program coordinator for the past two years.

What are some crops grown here?

What we’ll have in summer is blackberries, raspberries, squash, cucumbers, peppers, artichokes, peas, herbs, spinach. And then in the fall, we’re turning more to corn and beans. In the winter, we grow heavy greens that can withstand the cold and freezing.

Is this garden like the edible schoolyard we’ve heard so much about in Berkeley?

The Berkeley one is huge; they have a full acre. We have a third of an acre. Ours is more focused on rotating crops, so it’ll be empty, then growing, then it will be baby, then big. Theirs is always there. We’re still growing, figuring out our crop rotation.

Which students help in the garden?

The cooking club meets after school one day a week, and they come to the garden to harvest. Last year, the engineering class designed a woodburning pizza oven. A history class that’s learning about Native Americans . . . a staple of the native American diet was the “three sisters”: corn, beans and squash. The corn has already been planted, but the students will plant the beans and squash as part of their integrated learning. What we’re trying to do is have it so there’s not one small group driving it.

Obesity is such a big issue in society, Sacramento included. Why is that?

I think it has to do with education and access. Large swaths of South Sacramento where obesity is such a huge issue are food deserts, where they don’t have easy access to (fresh) food. People think that it’s cheaper to purchase at fast-food restaurants than it is to go to the store and cook for yourself. Most students aren’t getting their servings of fruits and vegetables every day, and what we really provide is an opportunity for students to eat vegetables and fruits and find out that they’re delicious.

Outside of preventing obesity, what are the main goals of edible sac high?

Hunger is an issue that many of our students face every day, and by learning about the urban agriculture movement in Sacramento . . . they can be agents of change in the community.

What else can we learn from the garden?