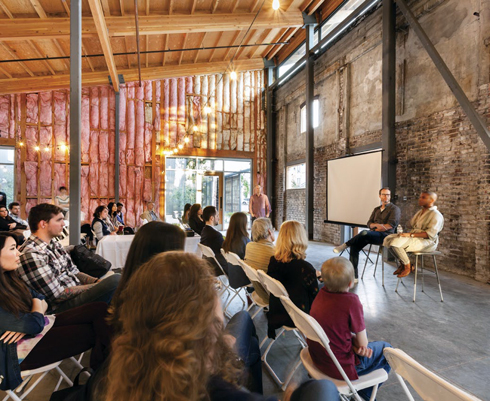 Take two successful people from different creative fields. Give them a theme and 15 minutes to talk about their work and ideas. Add in a lively discussion with an inquisitive audience. Serve popcorn. That’s the winning formula behind Creativity +, a regular dialogue series by and for Sacramento’s creative community.

Phil Tretheway, who founded Creativity+ with Heather Orr-Martinez and Tamara Lawrence, explains that the idea for the series grew out of a panel discussion about the state of the city’s design community during another gathering of creatives, the CMND SHFT conference.

“We realized there are so many one- and two-person businesses around town working out of their garages and homes and coworking spaces. We wanted to create a venue for them to come and meet each other, get inspired and build community,” says Tretheway. “Our motivation is to showcase the diversity of the creative community here in Sacramento.”

By juxtaposing speakers from different fields (say, a social media expert and an abstract painter, or an advertising executive and a jewelry designer), the conversation has the potential to go in some unexpected directions and reveal something bigger about what creative professionals share in common.

As Tretheway puts it, “One story is cool; it’s powerful; it’s moving. But when it’s two people, it really shows you the breadth of the idea. Plus, the lovely part about pulling from so many creative fields is that we’re drawing in different audiences every time. It’s empowering to see people from across the creative community come out for the events.”

The theme for each talk—past topics include chaos, perfection and origins—is used as a scaffold for the conversation and draw parallels between the presenters. “The topics help focus them and bring them together, even though they have different life experiences,” explains Tretheway. “It’s really surprising how you see common threads that tie people together. We’re not all that different, while being beautifully different at the same time.”

The question-and-answer session, meanwhile, gives audience members an opportunity to interact with people they might not otherwise meet.

“One of the things we’ve heard is that people love the Q&A. They like being able to sit a few feet away from people who are accomplished in their field and ask questions and get to know them in a more intimate way,” says Tretheway. “We have amazing creatives here in Sacramento, but they’re kind of tucked away, so when we expose each other to our different thoughts and processes, we’re enriched by it.”