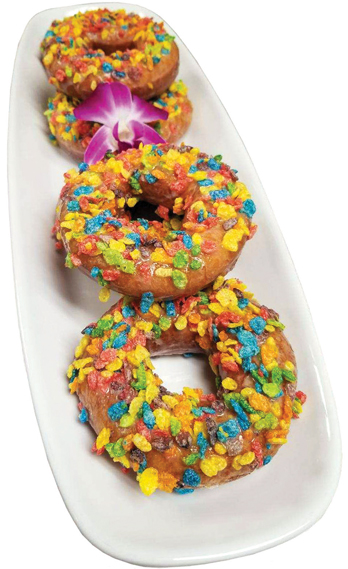 Stardom has its privileges. Just ask the celebrities who are lavished with Sacramento-style hospitality when they perform at Golden 1 Center. Artists receive gift crates brimming with locally sourced goodies, including bacon-almond toffee, Blue Diamond almonds, freshly baked treats and coffee from Sacramento purveyors. There’s also a fully stocked espresso cart at the dock where performers and their crew enter the facilities, complete with a sign welcoming them to the arena.

For some artists, the marketing team conducts research on their favorite foods and beverages, then coordinates with chef Michael Tuohy, general manager for Legends Hospitality at Golden 1 Center, and his team to procure or create special items in addition to the the gift crate. As Rinehart puts it, “We have worldclass performers and artists coming to Sacramento. We want them to have the full experience and for them to feel at home.”

For famed crooner Neil Diamond, who performed in Sacramento in August and is said to favor ice cream, that meant laying out an ice cream sampling bar with upward of 20 house-made flavors. “We knew that Mariah Carey was a big fan of rosé, so we went out and found a local rosé for her,” says Rinehart. Fellow headliner Lionel Richie, meanwhile, was treated to a custombaked strawberry shortcake, reportedly one of the singer’s favorite desserts. Rapper Kendrick Lamar, who has a well-known affinity for Fruity Pebbles, received a gift of cereal-topped doughnuts made by Golden 1’s in-house pastry chef.

Rinehart says the artists love the special touches. “We definitely get positive feedback from everybody. A lot of them are surprised—they don’t get this kind of treatment everywhere. It’s that extra touch point that differentiates Golden 1 Center from other buildings.”

According to Rinehart, preparing the unique culinary gifts is rewarding for the Golden 1 staff, too. “Everyone on the team loves working on it. I think what they like most is the reaction of the artists and their managers. It’s always fulfilling to see the appreciation when it happens.”