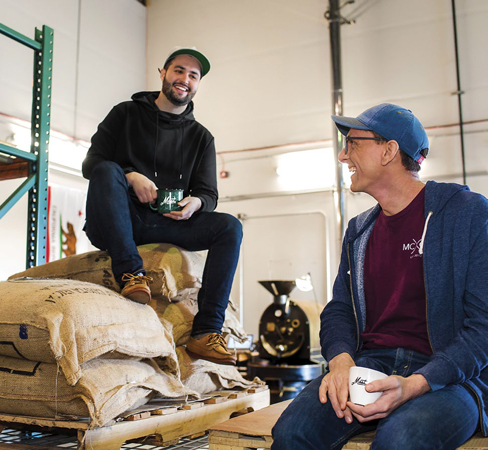 ALTHOUGH THERE ARE EASIER WAYS to start a coffee roasting business, they might not be as entertaining as Mast Coffee’s origin story.

Michael Sanchez and Stephen Mentze met while working for Shady Coffee in Roseville. They got a coffee cart and started catering at local events. “Our first wedding was the scariest moment of our lives,” Sanchez says. The espresso machine was still wet (they’d just painted it), and they were afraid the wiring wouldn’t work. They hid behind the cart as people approached. Much to their surprise, the event was a success.

Sanchez and Mentze found their first big coffee roaster, a Diedrich, in a Craigslist ad. The catch? They had to drive to rural Idaho to pick it up. With $15,000 in cash, they made the long trek, worrying the whole time that it was a setup. Sanchez called his parents when they arrived because he was afraid he wouldn’t make it back. The partners played rock-paper-scissors to see who would get out of the truck to inspect the roaster. It all worked out. They brought their prize home.

Thus, Mast Coffee was born in Rocklin. The 27-year-old entrepreneurs sell coffee equipment and train people how to use it. They also roast coffee beans and sell their coffee wholesale as well as online. This year, they are planning to move to a larger space and open a cafe in Roseville.

Sanchez is the talker, the front man, while Mentze stays in the back, working with coffee beans. Before they got the Diedrich, Mentze roasted on the cutest, tiniest roaster. (They still have it.) He started working as a barista at the age of 16. He practiced roasting beans on the stove in his parents’ house and took samples to the people who worked at Peet’s Coffee. “They were pretty awful,” he says about his early efforts. He got better. Much better.

According to Sanchez, if they hadn’t started a business together, “I’d be selling used cars. Stephen would be roasting coffee in his basement.”