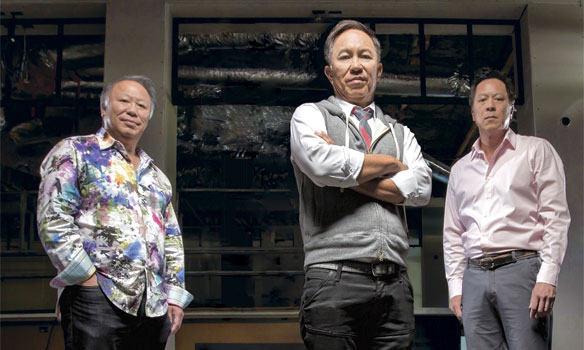 Iron Horse Tavern, which will occupy a dramatically transformed former office building at 15th and R, is the latest in a string of new restaurants coming to the central city this spring.

The eatery’s concept—“old-school Euro tavern meets the modern age,” as described by co-owner Mason Wong—is in keeping with the old-new spirit of R Street, once an industrial rail corridor that over the past several years has morphed into a hot spot for dining and nightlife.

Wong was coy about the specifics of Iron Horse’s menu, which he called “creative American with some Asian influences.” He did reveal two dishes it will include: Korean fried chicken and pizza. “We spent a lot of time researching a pizza crust that’s different from what anybody else in town is doing,” says Wong. At the bar, expect “a lot of craft cocktails, 20 or so beers on tap, and a pretty good whiskey program.”

The menu is the result of Wong’s extensive travels—to Portland, Seattle, Chicago, New York, Los Angeles, Las Vegas—to sample what chefs are serving at some of the country’s hottest restaurants. “We took our chef [Christian Palmos] with us. We ate so much on each trip, after three days we didn’t want to eat anymore,” says Wong. “We’d stop at probably four restaurants during breakfast and lunch. Then we’d go to two places for dinner. We got some pretty good ideas, but it was a lot of work.”

Wong, who co-owns Cafeteria 15L and other establishments with brothers Alan and Curtis, says they are excited to be a part of the new wave of restaurants opening in Sacramento’s core, especially after enduring a bleak economy that put many local restaurateurs out of business.

“I’ll never forget that in my lifetime. It was a very difficult couple of years,” says Wong of the recession. “You go through those times and you hope you never have to do it again, but you learn what it takes to survive when the economy is at rock bottom.”

Snagging Iron Horse’s primo location was a coup. “We’re pretty fortunate that we got in early and we got the location that we did,” Wong says. “We’ll be central to everything that’s happening up and down R Street,” including a bevy of new restaurants and shops slated to open in the coming year. Iron Horse’s neighbors will include two casual eateries that are local favorites: Dos Coyotes and Roxie Deli.

Wong is bullish on downtown Sacramento, especially the potential impact of a new downtown arena on businesses like his. “The new arena is probably the best thing that could have happened to the city,” says Wong. “It puts us miles ahead of where we would have been. There’s no question that downtown is coming into its own. It’s an exciting place to be. We’re proud to be a part of it.”