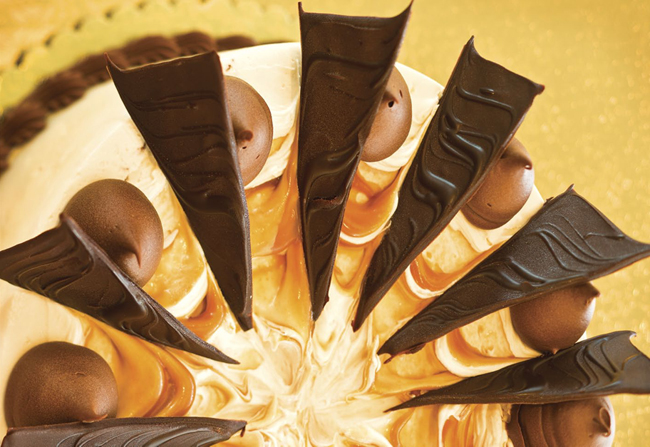 If you have a sweet tooth, you’ve probably found yourself at one time or another squeezed into a snug booth at the original Rick’s Dessert Diner on K Street. Over the past three decades, this landmark shop offered a dizzying selection of house-crafted desserts, attracting hoards of people willing to wait in line for the mile-high cakes, pies and other baked goods. With its distinctive 1950s vibe and convenient midtown location, Rick’s served as the backdrop for countless first dates, celebrations of soccer wins and good report cards, and festive gatherings of friends.

It came as a bit of a surprise to the food community when Ahmed Eita, who has owned Rick’s since 1992, announced that he was moving his iconic dessert diner in late 2014 to much larger digs on J Street. I was not alone in wondering if he could pull it off. Would he be able to reproduce Rick’s unique ambience in this new, much plainer space, located on the ground floor of a commercial building? Although the decision to move may have appeared spontaneous, Eita waited six years until he was fully ready. “I was cautious,” he says. The diner had enjoyed rollicking success for 28 years, and he didn’t want to screw it up. He looked around, but nothing seemed completely right until he stumbled upon the new location. “It was a no-brainer,” he says.

“It was on J Street, and I always wanted to be on a corner.”

The decision to move was prompted by a very real lack of space at the original Rick’s. “We couldn’t keep up with demand,” Eita explains. “We were turning people down, and they were upset about it.” In addition, the kitchen was cramped, which limited production. He felt the move would finally allow him to accommodate everyone who wanted to enjoy his desserts.

Eita’s caution and timing seem to have paid off. His new location and careful replication of the original Rick’s decor is resonating with custom-ers, who are embracing the bigger space. The line for service is (mostly) more manageable than in the past. “People still miss the old place,” says Eita. “I loved that place.” But he’s pleased that he’s not turning people away anymore, and he and his team of three bakers now have the room to crank out all the pastries they need to satisfy demand.

If you are in the mood for cake, Rick’s has just about any variety you could imagine. Flavors range from Boston cream torte, elevated with puffy layers of whipped cream filling, to chocolate peanut butter cake, banana cake and one of Eita’s personal favorites, pecan-studded carrot cake. (“Sometimes,” he says, “I come in in the morning and have it for breakfast.”)

While perhaps best known for its fanciful, enormous cakes, Rick’s also serves a seemingly endless array of tarts, cheesecakes, brownies, pies and an interesting assortment of other desserts such as creme brulee and eclairs. Standouts include a rich chocolate caramel mousse tart, made with an Oreo cookie crust, and a creamy, intensely flavored cherry amaretto cheesecake. One of the best desserts I tried was a captivatingly light tiramisu that offered a delicate and delicious balance of espresso, Kahlua, rum zabaglione and chocolate.

Eita, who serves as head pastry chef, is excited about the larger production space, and he plans to expand the menu (and hours of operation) to include breakfast pastries such as scones, cinnamon rolls, croissants and muffins. After 23 years in the kitchen, he’s still excited to tie on his baking apron every day. “I found my niche in life,” he says. “It’s a lot of hard work, but I love it.”