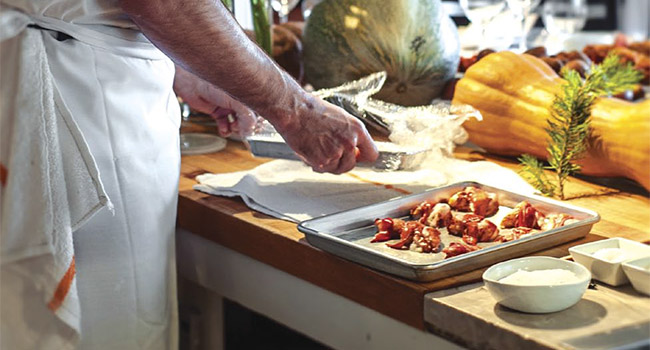 Anyone in the Sacramento region with a modicum of interest in food knows The Kitchen. For more than two decades, the exclusive restaurant on Hurley Way has been the holy grail of fine dining in the city. Wonderfully distinctive and eyebrow-raisingly expensive, The Kitchen built its lofty reputation on theatrical, demonstration- style multicourse dinners constructed from thoughtfully foraged local ingredients.

Until 2005, chef/owner (and master of ceremonies) Randall Selland was the undisputed face and personality of The Kitchen. Entertaining diners with an edgy, brash sense of humor and luminous culinary talent, Selland managed and starred in the four- to five-hour-long dinners, contributing importantly to the upbeat revelry for which the restaurant was famous.

Sidelined by a double hip replacement in 2005, Selland asked longtime employee Noah Zonca to step in. Zonca carried on the upscale culinary party at The Kitchen (in a presentation style very similar to his employer’s), with Selland jumping in for special events and vacations, until this past December, when Zonca left to open Capital Dime in midtown. Selland and his family launched a national search for a replacement executive chef that took seven months.

It was difficult, notes Selland, to find someone with just the right combination of skill and personality to take over the iconic restaurant. He felt it was time to “put the show in the background,” he explains, and shine the spotlight on the ingredients and cooking techniques. “We wanted the focus to be more on the food, not about being loud and obnoxious,” he says.

The family eventually hired John Griffiths, who’d recently worked in St. Louis, Mo., as executive chef of Truffles, a highly regarded restaurant with a modern Italian menu of housemade pastas, salumi and bread. Selland briefly worked side by side with Griffiths before letting him fly solo in July. The transition appears to have been seamless. Griffiths says his extensive travels through Europe and Southeast Asia, as well as his experiences cooking on the East Coast and in the Midwest, have been “huge influences” on him and will be reflected in his menus.

A veteran Kitchen diner, I was excited to visit for a meal under Griffiths’ direction. It was immediately clear that the executive chef has embraced Selland’s new vision for the restaurant. The former giddily festive ambiance that some may have experienced as a bit overwhelming is now notably toned down. I found it to be a quieter, gentler-on-the-senses evening. The demonstration-style dinner rolls out much the same way it always has: visually stunning, diner-inclusive and packed with colorful ingredient information. But there is a respectful emphasis on the food and minimal glitzy theatrics. Griffiths connects nicely with his guests, guiding them thoughtfully through his menu, but his softer demeanor and passionate interest in his dishes, mixed with a dry, clever wit, makes for a more subtle dining experience.

Griffith’s five-course repast, which I enjoyed approximately six weeks after he took the helm, was a knockout. Prepared with a lighter, more produce-focused sensibility than previous meals I have had at the restaurant, it was as elaborate and breathtakingly photoworthy as any Kitchen fan could hope for. For the first course, an intensely fruity Charentais melon soup was accompanied by a ceviche of Mount Lassen trout made with chopped pecans, fresh lemon zest and chives and embellished with an airy lemon verbena emulsion. Wild quail “saltimbocca” was served with silky housemade agnolotti crammed with puréed sweet summer corn. Drizzled with a jammy, flavorful blueberry mostarda, the dish was a dazzler. And a delicate peach leaf sorbet, with its haunting sweetness, was a lovely accompaniment to the chef’s light-on-the-palate nectarine semifreddo dessert.

Swapping chefs at an established, high-profile restaurant can be a dicey affair. Selland admits that some longtime customers of The Kitchen are grumbling about the new, toned-down ambience. But I would encourage anyone interested in sophisticated farm-to-fork dining to visit and sample the dramatic, impressive cuisine that Griffiths and his talented staff are plating up. I think you’ll find that the changing of the guard at this Sacramento restaurant institution has been a successful one.