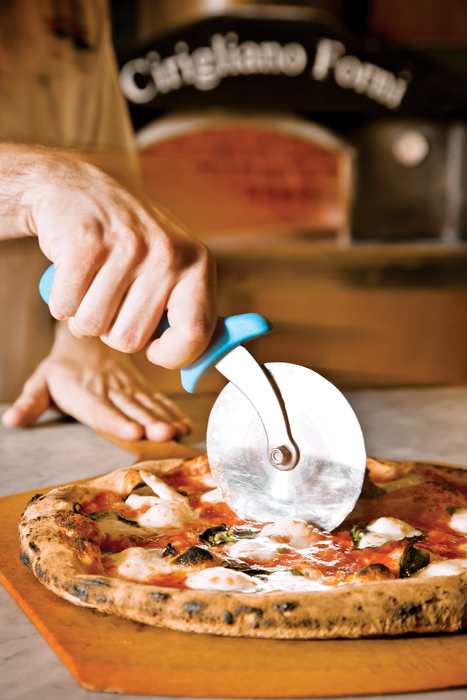 Pizza is hot these days, and we’re consuming it here in Sacramento with great gusto. Upscale pizza places such as Matteo’s, OneSpeed and Hot Italian are thriving despite the tentative economy.
Now a flashy newcomer is pairing pizza with an entertaining punch of theatrical glitz. In the process, it also appears to be breathing some life back into a city corridor that many thought was incapable of revitalization.
Push your way into Pizza Rock on downtown’s K Street Mall and you’re likely to feel assaulted by the loud, pulsating music and hungry crowds clustered by the door. When your eyes adjust to the dim lighting, you’ll spy a flame-emblazoned semi truck seem-ingly bursting through a wall above the bar, surrounded by an industrial chain-link fence.
Enormous black booths against the opposite wall, shaped like cartoonish truck grills, serve as the restaurant’s subwoofers. Lavishly tattooed bartenders sling cocktails, and big, cheery tables of pizza eaters add a note of revelry to the narrow, long space. Just when you think it can’t get more raucous, the music swells to a deafening volume, and a wiry man armed with a floppy disc of pizza dough springs from the shadows and performs an acrobatic routine with the dough, flinging the disc in the air and managing somehow to do handstands, followed by loopy tosses of dough through his legs.

Selecting a pizza here can be challenging: The menu offers an array of styles and shapes. The Classic Italian has a thin (but not the thinnest) crust, the Sicilian a focaccia-style crust. The Classic American has a sweeter tomato sauce than the others. The Napoletana is the thinnest-crusted of the bunch. It’s baked in a mere 90 seconds in the restaurant’s 900-degree wood-fired Cirigliano Forni oven. The outer crust is crisp and chewy, while the center remains a bit moist. Fold it in half lengthwise before shoving it in your mouth.
Of the Napoletana-style pizzas, the star of the bunch was The Margherita, winner of the 2007 World Pizza Cup in Naples, Italy. Generously swabbed with a lively San Marzano tomato sauce, the messy but delicious pizza was dotted with white rounds of fior di latte
mozzarella and embellished with extra-virgin olive oil and fragrant fresh basil.
I also enjoyed the intriguing Pizza Romana, a rustic, enormous rectangular pizza designed to feed two to three people. Baked in an Italian electric brick oven, it was divided in three sections, each with its own set of toppings, to constitute a “starter,” main course and dessert—sort of a meal in one. The pizza’s starter section was topped with prosciutto, arugula and Parmigiano cheese—a simple, brisk nosh. The middle, or main, portion showcased a garlicky cream sauce topped with lumpy, moist, fist-size meatballs. The sweet section was an imaginative combination of Gorgonzola cheese, dates, apple slices, honey and Nutella. Though I was enchanted by the idea of an all-in-one pizza, ultimately it all added up to way too much crust for my groaning stomach, and I lost steam by the time I got to the dessert section.
Other tasty pizzas I tried were the Cal Italia pizza, whose fetching tumble of toppings included Asiago and Gorgonzola cheeses, sweet fig preserve, prosciutto and an intense balsamic reduction; and a New York sausage and bell pepper pizza (the most reminiscent of the American pizzas of my childhood), generously slicked with a brightly flavored tomato sauce, lots of chewy mozzarella cheese and compact little balls of Italian sausage.
Pizza Rock also serves innovative salads, including an interesting heirloom watermelon-radish salad with chicory and pancetta, and a handful of pasta dishes and burgers. I found the tagliatelle pasta heavy, with too much cream sauce and not enough wild mushrooms, but the feisty buccatini pasta offered an enticing, spicy bite and was crowned by a whole Calabrese sausage link that was fabulous with my glass of Zinfandel.
It’s always exciting to visit a new restaurant with energy and personality. Timeliness of concept is as important as location in this business, and Pizza Rock appears to have nailed both. Even more exciting to me is that a new crop of diners and clubbers is flocking to an area of downtown Sacramento that’s been in desperate need of a jump-start. The fact that it serves great pizza just makes it all that much more appealing.

Sweet ending: A huge slab of tiramisu, generously infused with rum and Frangelico, is sprinkled with shaved Valrhona chocolate
Where’s the beef?  A Kobe beef burger is topped with Gorgonzola cheese and pesto mayonnaise