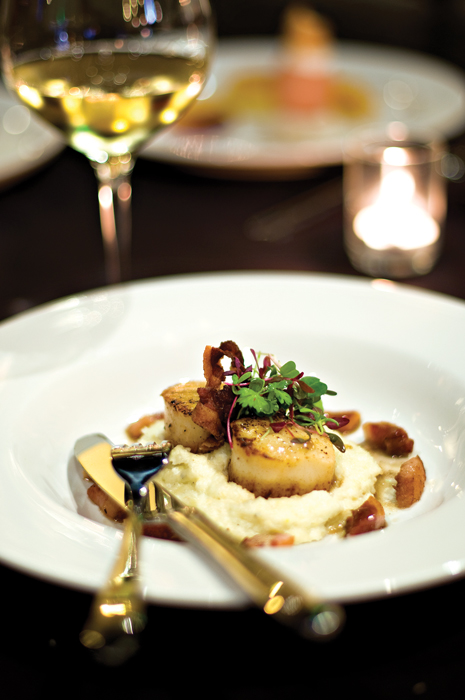 If you keep up with restaurant trends, you know that chefs are pouring their talents into small plates, allowing diners to sample an array of flavors and textures instead of plodding though one large entrÃ©e. â€œArtisan-craftedâ€ food is another trend, and so is the use of locally sourced ingredients.
Â Â Â Â  Brothers Lucas and Jacob Elia, who opened Rosevilleâ€™s Bloom Coffee & Tea in 2009, have adopted the small plates-artisan-local triumvirate at their new Roseville restaurant, Pause Lounge & Kitchen. Thanks to its strikingly urban, minimalist design, Pause is an incongruous yet enticing addition to the Stone Point shopping center, with its striped awnings and European village vibe.
Â Â Â Â  Many new restaurants turn out un-evenly prepared food in their first few weeks or months, and Pause (which opened in early January) was no exception. On my three visits, I tried many of the dishes on the compact menu. Standouts included a perfectly seared foie gras, though the accompanying poached pear was far too sweet and overly spiced to complement the buttery, delicious duck liver. A small portion of New York steak, served on a lovely celery root purÃ©e, was luscious and expertly grilled.
Â Â Â Â  I enjoyed the apple- and walnut-packed endive salad so much that I ordered it on two occasions, and a tidy portion of seared diver scallops, arranged on a creamy mound of grits and embellished with a springy nest of microgreens, was fabulous, despite the fact that I couldnâ€™t see or taste the bacon foam promised on the menu.
Â Â Â Â  But I wouldnâ€™t recommend the crab beignets. Not only couldnâ€™t I taste any crab, but the lemon aiÃ¶li it was part-nered with had no discernible citrus flavor, and the cayenne powdered sugar dusted on the outside of the beignets added an unpleasant sweetness. Tough slices of duck breast were paired with a super-tart pomegranate reduction, and a prettily presented â€œhandkerchiefâ€ pasta, filled with goat cheese and mushrooms, was bland.

According to owner Jacob Elia, the menuâ€™s small plates are meant for sharing, with three dishes constituting an entire meal. That works well at dinner, because the menu offers good variety, but it breaks down at brunch, where the menu is very short. Five out of seven dishes include eggs; the other two are delectably naughty pastry cream-stuffed doughnuts and an assertively mustard-swabbed, kid-size croque monsieur. While I enjoyed the novelty of the duck confit hash and eggs, the portion was so modest that I ended up gobbling a peanut butter and jelly sandwich when I got home.
Â Â Â Â  One good thing about all those small plates, however, is that they allow you to save room for the restaurantâ€™s innovative and beautifully crafted desserts. A silky, delicate crÃ¨me caramel was garnished with jewellike citrus segments and a hollowed-out eggshell, filled with meringue and gooey lemon curd that was perched on a mushroomlike pouf of meringue, giving the dish a whimsical, Alice-in-Wonderland appeal. Tender carrot cake, arranged artfully in angular blocks on the plate, was another flavorful sweet, and a ganache-covered dome of creamy dark-chocolate mousse was lightly sprinkled with sea saltâ€”a marvelous, very contemporary touch.
Â Â Â Â  Pause definitely has some kinks to work out. I received wildly different wine pours both times I visited at dinner. Servers bring the bottle to the table and pour, freehand, into the glassâ€”not a good approach when a restaurant is striving for consistency. At one meal, I received a second glass of wine that was double the portion of the first. I also was shocked that, weeks into its opening, the restaurant still wasnâ€™t set up to make coffee. When I ordered a cup at brunch, owner Jacob Elia trotted across the parking lot to his other business, Bloom Coffee, returning with a steaming mug for me. While I admired the extraordinary customer service, I wondered what he would do if four or five tables all wanted coffee at the same time.
Â Â Â Â  Still, thereâ€™s a captivating sense of excitement at Pause Lounge & Kitchen. I like its energy and stylish, citified ambiance.

Bottoms up: Handcrafted cocktails are a big deal here
Lock it up: Pause offers a wine locker program with an appealing list of perks, including guaranteed reservations, private wine tastings and waiver of the corkage fee