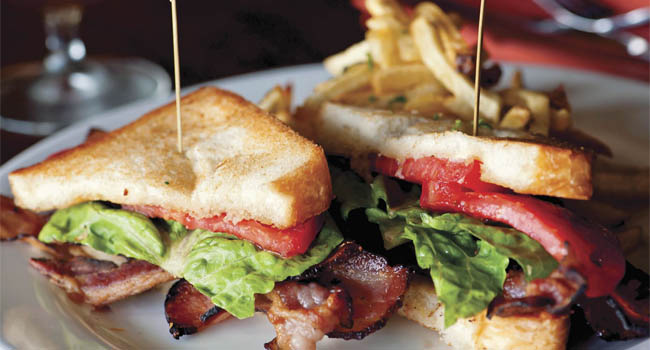 The town of Fair Oaks, whose central village is known for its thriving wild-chicken population, has a new restaurant named after a pet rooster. Mighty Tavern, which recently took over the space occupied for many years by La Boheme, honors owner Joan Lapuyade’s childhood companion, Mighty the rooster.

The friendly, unassuming restaurant is a far cry from the crisply sophisticated La Boheme, which served up pricey French fare for two decades to a well-heeled (and deep-pocketed) constituency. Mighty Tavern focuses on a different demographic: “Our goal,” says co-owner Dennis Lapuyade, “is to offer really approachable, ‘taverny’ food that reflects the changing seasons.” The duo used no bank loan or investors to open up the new enterprise. “It’s total mom-and-pop,” says Lapuyade, who came out of retirement to join his ex-wife in the endeavor. “And it’s the last restaurant we’ll do,” he adds, reflecting on a long food service career that includes ownership of César restaurant in Berkeley (in which they both were involved) and a 12-year maitre d’ stint at the iconic Chez Panisse. The new restaurant has a decidedly airier and more casual ambiance than its former occupant, though the main dining area feels a bit like grandma’s front room, with its brick fireplace, wood wainscoting and smattering of potted plants. White tablecloths add a touch of glamour, and a vibrant young waitstaff keeps things upbeat. The Lapuyades teamed up with Carolyn Kumpe, formerly the chef of Renwood Winery, to offer an eclectic, reasonably priced menu that emphasizes fresh, locally sourced ingredients.

When I visited, appetizers ranged from pickled eggs and crostini with goat cheese and housemade apricot jam to a fragrant bowl of steamed mussels with chunks of roasted potato and salty bits of bacon. Salads included a sprightly composition of mixed greens with an assertive handful of radicchio, tossed with tangy pickled beets, aromatic raspberries and walnuts. It was bright and enjoyable. An earthy lentil salad was another engaging choice, made with crunchy walnuts, soft, tangy lumps of feta and perfectly ripe cherry tomato halves. The kitchen offers a compact lineup of entrées every evening.

I was puzzled on one visit by a pretty cavatappi pasta dish that featured a stiff scoop of walnut “sauce” on a colorful tumble of noodles, crisp asparagus chunks and cherry tomatoes. I awkwardly stirred the walnut mixture into the pasta, all the while wondering what Kumpe’s vision was for the dish. More successful was a delicate seared Skuna Bay salmon with soft roasted fingerling potatoes, asparagus and cherry tomatoes— one of the finest entrées I ate at the restaurant.

Fish might be the way to go at Mighty Tavern. I tried a flaky, beautifully cooked petrale sole, carefully placed on a pile of sautéed spinach and bathed in a subtle tomato beurre blanc. But the pan-roasted hanger steak wasn’t nearly as impressive: I ordered it cooked medium, and it arrived incontestably rare, and it was so chewy I eventually gave up trying to eat it, though its accompanying parsley-flecked fries were delightfully crispy. On another visit—this time at lunch—I was smitten with a special BLT created for Sacramento BLT Week. The handsome, aïoli-slathered sandwich featured thick slices of heirloom tomato and a generous amount of bacon, and it was served with a ravishingly fresh salad topped with cold, thinly sliced cucumber—a real treat on a sweltering summer afternoon. The signature Mighty Burger was another winner: a perfectly cooked halfpound Niman Ranch patty loaded with melted cheddar, lettuce, red onion and pickles.

Dessert choices are limited. The triple-chocolate pudding was creamy and tasty, topped with a frothy pouf of whipped cream and garnished with a whimsical, rooster-shaped chocolate-shortbread cookie in a crunchy homage to Mighty the rooster. But a photo-worthy panna cotta had a somewhat stiff texture and was topped with preserved cherries so shockingly sweet and hard to chew that I pushed them to the side. However, the two pieces of cornmeal shortbread that accompanied the panna cotta were meltingly fabulous. Mighty Tavern offers a fun little wine list sourced almost exclusively from El Dorado, Amador and Nevada counties, and it also stocks an impressive selection of draft and bottled beers. The attractive bar, separate from the dining room, is a great spot for a casual meal. The Lapuyades also are developing a beautiful outdoor patio area for additional seating in the warmer months.