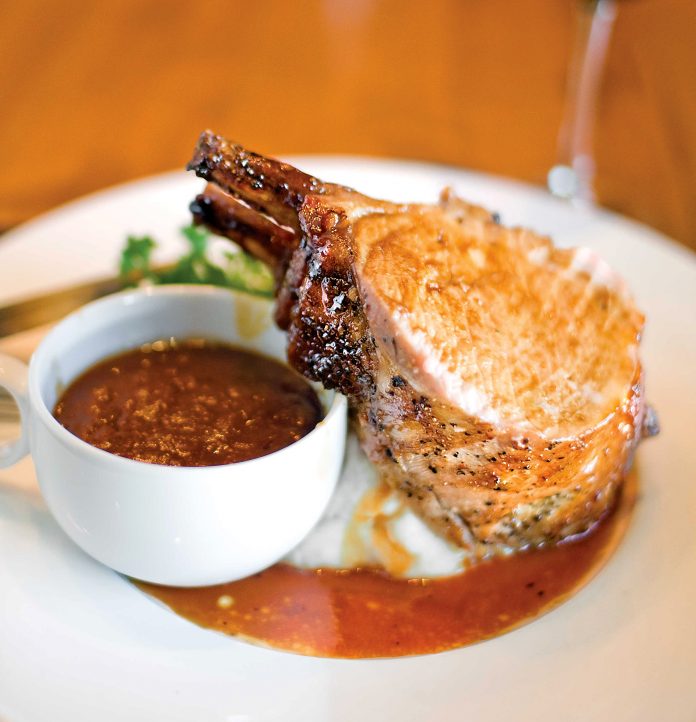 There was a moment when, driving through a busy retail center searching for Land Ocean, I entertained doubts that Folsom could squeeze another restaurant into its dining landscape. I seemed to be surrounded by eateries, each clamoring colorfully for my attention as I dodged slow-moving cars and shoppers in the crowded parking lot.

But while I may have questioned the possible saturation of Folsom’s restaurant scene, Karoline and Mark Platt, owners of the new Land Ocean on East Bidwell Street, are filled with confidence, certain that Folsom diners are ready to embrace their “New American steakhouse” concept. Crediting the shaky economy for their opportunity to snatch up an affordable restaurant property in a great location, the Platts are feeling lucky right now.
Land Ocean, the couple’s second restaurant (the first is Sienna in El Dorado Hills), is located in a space once occupied by a Ruby Tuesday. The Platts spent almost a half million dollars gutting and renovating the front of the house, transforming it into a dramatic bilevel interior whose focal point is a handsome bar area. Their goal: to create a space reminiscent of a San Francisco restaurant.

The all-booth seating is staged to showcase the bar, and the place has a masculine, sturdy appeal that seems appropriate for an upscale steakhouse. Lighting is very dim—I had a hard time reading my menu, and I don’t wear glasses—but I enjoyed the spacious, springy booths, which afforded some privacy from other diners.

The menu’s beef choices (all sourced from Double R Ranch in the Okanagan region of Washington state) include a center-cut rib eye, a 16-ounce New York strip and a filet mignon. But carnivores seeking a more casual meal also can enjoy their beef in a sliced rib eye and Thai noodle salad, tossed in a spicy peanut dressing with avocado and mango, or a decadent “prime dip”: sliced-to-order prime rib stacked on ciabatta bread with melted Gruyère. There’s also a half-pound Kobe beef burger, swathed in Vermont cheddar and generously layered with lettuce, red onion, tomato slices and pickles.

The restaurant’s New American moniker “gives us an opportunity to push the boundaries of a traditional steakhouse,” says Karoline. However, I didn’t encounter many boundary-pushing dishes at Land Ocean, with the exception of the unusual wild King salmon, served with chorizo hollandaise and a mound of macadamia nut-cilantro rice. I ordered it simply because the ingredient combination seemed so bizarre, but the chorizo and macadamia nut flavors were muted enough to be almost indiscernible. Some of the more impressive dishes I tried: the wonderfully thick, bourbon-glazed Kurobuta pork chop, accompanied by a sweetly pleasing housemade apple sauce; and the chewy, robust baby back ribs, spackled with a tasty spice rub. The succulent roasted chicken, cooked in a wood-fired rotisserie, was another solid choice.

Every evening, there are four daily fish specials. One night I visited, the kitchen was serving grilled swordfish. Juicy and perfectly cooked, it came, unfortunately, with bland cilantro rice and woody, inedible asparagus spears. The ahi poke appetizer, however, was a delight: chunks of velvety ahi tossed with macadamia nuts, ripe, sunny mango and avocado in a spicy, sesame-laced peanut dressing. It was a flavorful, vivacious way to start a meal.

Salads I tried weren’t as successful. The limp Caesar, crowned with a crispy Parmesan toast, was so uninspiring I nibbled a couple of bites, then pushed it to the side. And a sesame-seared ahi tuna salad, made with tired lettuce and bathed in an overly sweet soy-ginger miso dressing, was not a dish I would order again.

The Platts’ new steakhouse is a different concept from Sienna, which was quickly embraced by El Dorado Hills diners hungry for a place to fill the void left by the closing of Masque Ristorante. One of just a few upscale restaurants in El Dorado Hills, Sienna has enjoyed enduring popularity. Land Ocean, located in a restaurant-dense section of Folsom, inevitably will face more competition than its sister in El Dorado Hills. I admire the Platts’ confidence and wish them the best as they tackle the lively Folsom dining landscape.