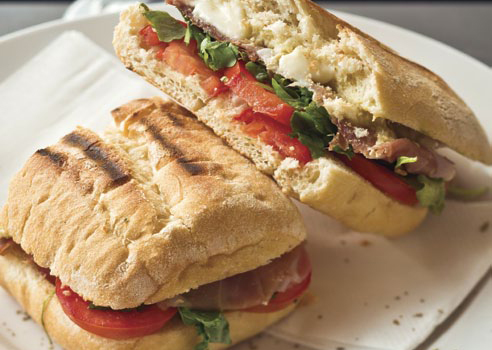 Eatuscany Caffe, the cheerful Italian deli and gelato bar that opened in August at L and 19th streets, is a welcome addition to midtown’s lunch landscape. Owners Franco and Stefania Zerbinati, who moved to California from Italy earlier this year, have created a light-filled eatery where listening to the staff converse animatedly in Italian is all part of the charm.

Panini, piadina (flatbread sandwiches) and pasta (including two types of lasagna and a daily special) dominate the menu. The antipasti and sandwich selections showcase the Italian talent for elevating simple cheeses and cured meats into delicacies. Bargain lunchers, take note: The panino combo—half a sandwich, a beverage and small gelato for $10—is one of the best (and tastiest) deals on the grid.

A recent lunch visit was characterized mostly by hits but also some minor misses. I love the idea of burrata with mixed greens and bread—is there a more deliciously simple lunch?—but was disappointed that the salad had been dressed with a heavy hand and the accompanying bread was dry, possessing none of the chewy texture I appreciate in a good loaf. With a couple of small tweaks, the plate could be perfection.

Eatuscany’s crespelle ai funghi is a tender Italian crepe rolled with chunks of sauteed mushrooms, blanketed in a creamy bechamel sauce and baked in an oval gratin dish. The crespelle is richer than its French counterpart—so rich that sharing it would be prudent—but is as warmly comforting as a cashmere blanket in winter.

Eatuscany’s panini stand out thanks to the quality of the fillings, including Italian staples such as prosciutto crudo di Parma, crescenza cheese and fresh mozzarella fior di latte (like buffalo mozzarella but made from cow’s milk). The Firenze—layered with paper-thin prosciutto, crescenza, tomatoes, arugula and artichoke crema—was a melty delight on the inside. The only downside was the dry ciabatta it was served on— again, an easy fix. The undeniable star of Eatuscany’s culinary show is the gelato made by hand by Stefania, who learned the craft from one of Italy’s premier gelato makers. The customer favorite is the Ferrero Rocher, which is studded with morsels of the famous chocolate-and-hazelnut confections. But my heart sang an aria for the eponymous Eatuscany flavor, a subtly sweet ricotta-based gelato dotted with dried figs from Franco’s own tree.

Service at Eastuscany is genuinely warm, and Franco and Stefania are eager to answer questions about the menu. (He makes the pasta; she bakes the pastries.) And the outdoor tables make for some of midtown’s best people watching.