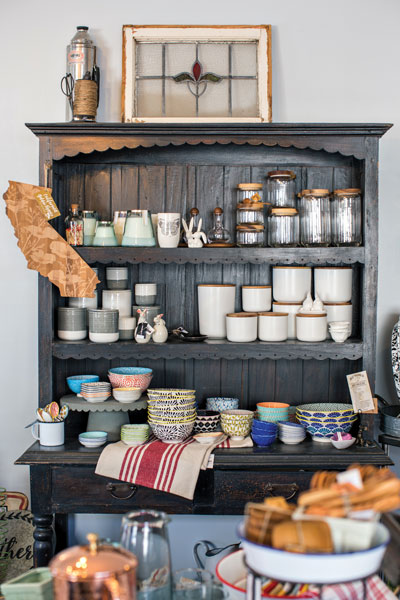 When Susan O’Brien’s husband asked her if she planned to return to a full-time schedule in her psychology practice when the youngest of their three children entered school, the prospect didn’t excite her. She’d been a psychologist for 20 years, first at Sacramento State and more recently in private practice, but as she considered the options for continuing in her career, it occurred to her that it might be time for a change.

“I spent some time reflecting on what really filled me with joy,” she says, “and two things stood out: gathering around food, and yard sales.” She asked herself how she could combine those two things into a daily occupation, and with that, the idea for The Kitchen Table was born.

O’Brien imagined a well-curated kitchen boutique that inspired patrons to cook delicious food, gather loved ones together, and create community and connection.

She entered the Downtown Sacramento Foundation’s Calling All Dreamers retail business plan competition in spring 2017 and was named a semifinalist shortly thereafter. Although she didn’t win the contest, she received so much positive feedback and resources that she quickly found a location in East Sac and opened the doors in November 2017, just in time for the holiday season.

The Kitchen Table is stocked with a wide selection of cookware, bakeware and tableware with heirloom appeal. O’Brien carries well-known brands, goods from smaller artisanal makers and local products that are often selected with gift giving in mind.

“In my psychology practice, I found that people were so disconnected. Whether they suffered from depression, anxiety or something else, it often came down to people not feeling connected to anything,” she says. “I wanted a place where people could connect and where they could be inspired to host other people. We are social beings, and I think I’m helping people find that connection in a different way now.”