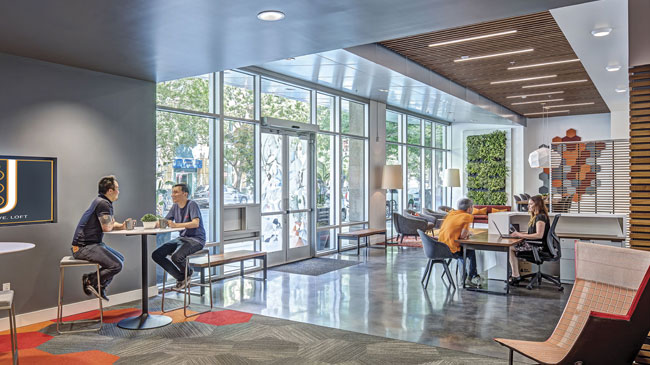 AMERICANS DON’T HAVE MANY RITES OF PASSAGE. You get your driver’s license at 16, (sometimes) cast your vote at 18, (legally) down drinks at 21, and then, well, time to grow up. Except adulthood is a bit nebulous, having none of those quantifying hallmarks of late adolescence. Somehow, we got the idea that adulting means getting a job and starting a family, but nothing says I’ve made it quite like paying a mortgage.

Ah, the American Dream. The ideal of homeownership was passed on in part through our parents and 1950s sitcoms, but statistics show that if you haven’t already woken up from the dream altogether, you probably will soon.

Whether it’s a generational difference or the lethargy of the housing hangover, renters appear to be waiting longer to buy a home. Most major U.S. cities have seen a rise in renters since 2004, and the number of new rental units across the country has increased annually by 770,000, while homeownership nationally has dipped from nearly 70 percent to just below 64 percent in the past 10 years In 2000, James Olson moved from his hometown of Modesto to San Diego to attend college. He spent the next 15 years living between San Diego and the greater Los Angeles area until the rising cost of living squeezed him out. Accepting a job in Sacramento as a civil litigator, Olson abandoned his Riverside rental, and in January he began leasing an apartment at West Sacramento’s Capitol Yards.

Willing to pay $1,570 for his one-bedroom unit because of its location (just close enough to and far enough from it all), Olson was also attracted to Capitol Yard’s amenities. “Gym, chef’s kitchen, billiards table, heated pool, free bikes—you can check out the bikes—and it’s right across the street from Raley Field,” says the 34-year-old. His rent slightly exceeded what he had hoped to pay, but as Olson is quick to point out, “I couldn’t have afforded this in LA.”

Living in Los Angeles or San Francisco, “you’re basically paying for the privilege,” says Olson. “But if you’re looking at taking home your paycheck and doing something with it aside from paying your bills, Sacramento is the place to be.”

Attending law school at the University of San Diego, Olson took on about $140,000 in student loans. His first legal job paid only about $55,000. “Basically, I could make a living, find a place to rent, pay down the debt by a little, but only the higher-interest loans while everything else accrued a shit ton of interest,” he says. Like so many who borrowed to finance their education, Olson now owes more than the initial loan. Looking to shave his debt, Olson decided to move to a more affordable city. “I could have come up to McGeorge and would have had the first year basically for free as a scholarship,” Olson admits. “But I didn’t go because I didn’t know what Sacramento was going to turn into. Now, six or seven years later, I’m kind of kicking myself.”

Mike and Katie Young also signed a lease in January. Unlike Olson, they previously owned a home—in Visalia. The married couple (he’s 32, she’s 30) moved to Sacramento with their three young children to plant a church, renting a three-bedroom home in South Land Park for $1,600 a month.

Limited by their finances (Mike works two jobs while living on a small stipend from his home church in Visalia), they don’t see homeownership as an option right now. But they admit there’s a certain freedom to renting, especially in a new town.

“With renting in a new city, you ultimately don’t know what a neighborhood will be like,” says Mike. Renting is less of a commitment than buying a home, and if they didn’t like South Land Park (spoiler: they do), they could move once the lease ends. Plus, says Mike, they’re not sure where in Sacramento the new church will be located, and they’d like to be close to the church, wherever that ends up being.

In the meantime, the Youngs wanted to live in a centrally located neighborhood, surrounded by other young families. They’d been planning the move for about a year but discovered South Land Park only last fall.

“We visited, drove around neighborhoods to get a feel, went to parks, talked to people,” says Mike.

Like Olson, the Youngs relied on apps like Trulia to find rentals within their price range. Unlike Olson, the Youngs saw a small hike in their rent by moving to Sacramento. Their current home would probably rent for a couple hundred dollars less in Visalia. They briefly considered moving to San Francisco, but “we didn’t look long,” Mike says with a laugh. “We looked at a two-bedroom apartment for $4,000 a month.” In San Francisco, he jokes, they’d be able to afford maybe the space of a couch for the rent they pay in Sacramento.

Ultimately, Mike would prefer to own a home, but renting has its perks. “I prefer to pay my own mortgage rather than somebody else’s,” he points out. “It’s also nice not to worry about repairs or yard care, so your stress level is lower as a renter.” Sometimes, he feels like he’s throwing money away on rent rather than building equity as a homeowner. “But for us, for getting to know Sacramento right now, renting is perfect,” he says. “It gives you an opportunity to be in a neighborhood and explore others.”

Renting allows the Youngs to focus on the city’s pleasures. “I think when you rent a house, you’re not as personally tied to it,” Mike says. “It’s functional, it’s a place to live, but it’s not the center of your orbit, so we feel more connected to the park, and that’s as much home to us.”

Still, he’d like to buy a house in Sacramento someday. “We’d do it in a couple years if we could afford it,” he says.

Olson would also like to buy a home in about three years, after he’s reduced his student debt. “I do feel that renting is temporary. It’s a phase in my life, and I’m moving through it,” he says. But he doesn’t feel any pressure to buy. “Three years to me now feels like no time at all. When I was in my 20s, I used to think three years was way too much.”

Renting gives Olson the luxury to move when he pleases. “I don’t know,” he says with a shrug. “Although I love Capitol Yards, I was thinking after baseball season is over, I don’t know if I’ll stay there. Maybe I’ll go check out 16 Powerhouse.” KNOW YOUR RIGHTS: When renting, it helps to understand California’s tenant laws.

1. Most landlords charge a fee to check your credit. But that fee can never be more than the landlord’s out-of-pocket cost.

2. As long as the rental period is less than a year, oral agreements between a landlord and tenant are legally binding. Proving an oral agreement in court, however, isn’t a piece of cake. When in doubt, write it down.

4. If you don’t have a lease, your landlord can raise the rent by up to 10 percent with 30 days’ notice (60 days for anything more). But since Sacramento doesn’t have rent control, the sky’s the limit for how high your landlord can jack your rent.

5. Without 24 hours’ notice and excepting an emergency, you’ve got the right to say no when your landlord stops by uninvited—no matter how much he wants to be your friend. HOW TO STAND OUT IN THE CROWD: Advice from the woman who could be reviewing your rental application.

Debbie Hart, owner of River City Property Management, has worked in property management for more than 30 years, but she’s never seen a rental market quite like this one.

This is a fiendishly tough market for renters, with fewer rental properties than would-be renters. As a result, says Hart, it’s harder than ever to find a place to rent.

In 2009, after the housing market collapse, Hart had an average of 22 rental vacancies a month. At one point, Hart says, she had 13 people break their leases because they lost their jobs. This year is another story altogether, and River City Management is averaging just four vacancies a month, with at least four or five applications per vacancy.

With fewer units and more applicants, prospective renters have every right to be daunted, but Hart offers a few tips.

Your rental history can be more important than your credit score, she says. A prospective landlord may contact your previous landlord to find out what kind of tenant you were. So when you’re filling out an application, make sure you’re on good terms with your last landlord.

Here’s another thing to know: Applications are not always first come, first served. More often, “it’s first come, most qualified,” says Hart. “I’m looking for longevity . . . I want the tenant to stay there for a while, and so does the owner.” That could be a single mother whose child will attend the school a couple of blocks away, or a renter whose work is within walking distance. During the application process, don’t be afraid to share relevant details.

Perhaps it goes without saying, but “be a good citizen and pay your rent on time,” says Hart. Personality matters. When applying for a rental, act like you’re applying for a job. The more you stand out during your interview, the more your application will, too. CLASSIFIED APPS: Newspaper classified ads—once the place to find an apartment—have gone the way of the Sony Walkman. Today, find your perfect rental on your smartphone.

CRAIGSLIST: While Craigslist isn’t the most visually pleasing search engine, it’s simple to use and ubiquitous. It doesn’t have the bells and whistles of some newer apps, but for many landlords, Craigslist is the first search engine that comes to mind. You might have to kiss a lot of frogs, but there’s a good chance you’ll find your prince through Craigslist.

RENTLINGO: RentLingo is like Craigslist on crack. More than an advanced search engine, the site operates like a guide to major cities. (Think Lonely Planet geared to renters.) In addition to listings, the site offers lifestyle synopses and Yelplike reviews of neighborhoods and cities. RentLingo also provides the city’s median price per bedroom and offers listing updates via email.

TRULIA: This popular search engine constantly updates rental listings, but its Android and iPhone app is really where it’s at. The easy-to-use site opens to an interactive app with rent prices pinned to each location. Click the pin to bring up the listing’s specs and photo on your screen. You can save favorites to retrieve later, and the app will send your phone notifications as listings update.

CHARM CITY: Adam Busch, who works for RentLingo in Sacramento, developed the site’s Charm Index, using the River City as its testing ground. The index is a map overlay that, block by block, displays varying gradations of red and green to display the intensity of a neighborhood’s charm. The Charm Index uses data on crime, businesses, parks and museums, and other lifestyle amenities to generate a scale of charm. Sacramento is No. 7 on RentLingo’s list of most charming midsize cities, and midtown peaks on the charm scale with a rank of 88. Not bad, Sacramento.

TRULIA: This popular search engine constantly updates rental listings, but its Android and iPhone app is really where it’s at. The easy-to-use site opens to an interactive app with rent prices pinned to each location. Click the pin to bring up the listing’s specs and photo on your screen. You can save favorites to retrieve later, and the app will send your phone notifications as listings update.