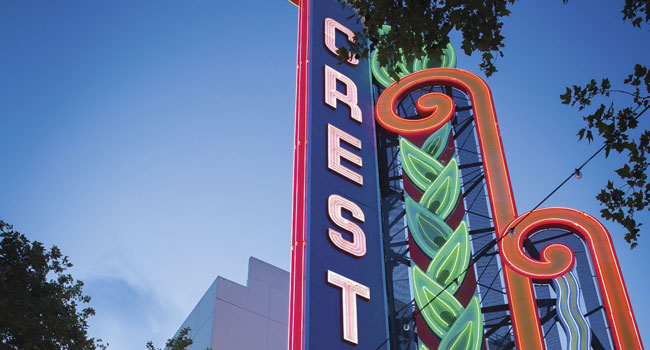 Last August, Sid Garcia-Heberger, general manager of the Crest Theatre in Sacramento, made the hardest decision she says she’s ever had to make.

After running the iconic downtown theater for 28 years, CSLM Inc., made up of Garcia-Heberger, her husband Bill Heberger, Andy Field and Gary Schroeder, opted not to renew its lease with owner Robert Emerick.

Under CSLM’s stewardship, the Art Deco movie palace had been a shining downtown destination during K Street’s many years of urban stagnation. That CSLM was leaving when K Street finally seemed to be achieving its long-awaited turnaround took many by surprise.

Emerick, a wastewater treatment engineer who purchased the building in 2011, took over operations at the Crest in November with his fiancee, Yulya Borroum. Because CSLM and Sid Garcia-Heberger were so well liked, problems under the new management were reported with a perhaps gleeful sense of schadenfreude. It wasn’t entirely clear why CLSM left, and many felt the new managers were in over their heads. People worried about the long-term viability of the beloved landmark.

But even before the dramatic management turnover last fall, Emerick had been steadily making changes to the Crest complex, which includes the theater, three restaurants, and office and retail space. Going into partnership with acclaimed chef Michael Thiemann, formerly of Ella, he opened the very popular Mother restaurant in what had formerly been a Blimpie sandwich shop. And last fall, Emerick, along with partners, was in the midst of creating yet another dining space, transforming two unused basement screening rooms into a full-service restaurant that would be part of the theater.

Despite CSLM’s longevity, what has been consistent about the Crest is that the theater has been in an ongoing state of flux almost since the very beginning.

MOVIEGOING DECLINE IN THE UNITED STATES

In 1986, when CSLM Inc. took over management of the Crest, the theater was closed and K Street was in a depressing state of dilapidation.

The Crest had opened in 1949 with an extravagant gala premiere, but by then, moviegoing in the United States was already in decline.

The peak was 1946, when roughly 90 million people went to the movies every week. In 1950, that number was down to 60 million, and by 1960 it had dropped to 40 million. The introduction of televisions into millions of households was the biggest factor, but large-scale migration to the suburbs was another.

The Crest Theatre’s trajectory followed these larger trends, and the Crest went from being Sacramento’s premier movie house in the 1950s to a second-run movie house and then a discount movie house, finally closing in 1979.

Various entities tried unsuccessfully to run the building. In 1984 and 1985, the Crest was rented out for punk shows featuring bands like Flipper, Public Image Ltd, Dead Kennedys and Redd Kross, their fans leaving the venue a little worse for wear, with graffiti and stickers on the backs of seats.

Garcia-Heberger was there when CSLM took over in 1986—she was originally hired to run the concession stand—and said the carpets smelled so bad from years of cigarette smoke and general abuse they had to be steam-cleaned before anyone could work in the building. The group did not have a lot of money but added a stage, a sound system and lighting. Garcia-Hebeger also remembers doing a lot of painting and cleaning.

The year after it began showing movies, CSLM brought in live music, launching in January 1987 with the iconic 1960s girl group The Shirelles (“Will You Still Love Me Tomorrow”). Notable bands and artists that played the Crest include Nirvana (the green shoe prints on the backstage wall are reportedly Kurt Cobain’s), Guns N’ Roses, the Ramones, Warren Zevon, Primus, Social Distortion, Etta James, Olivia Newton John, Lucinda Williams and No Doubt.

CSLM’s formula of movies, film festivals, business seminars, shows, lectures and other community events largely worked for 28 years. Unlike many other vintage movie palaces, which were often demolished, the Crest survived.

But Garcia-Heberger says that although they were able to support their families, the Crest was never a huge moneymaker. “There wasn’t a lot of meat on the bone,” she says.

In 2014, CSLM’s five-year lease went up for renewal. According to Emerick, CSLM had received a rent concession during the recession and another when it asked to be let out of the lease for the two basement theaters. Emerick says he did an audit of CSLM’s revenue, and when the audit showed the revenue was higher than CSLM stated, he increased the rent from $6,000 to $7,500 a month.

For Garcia-Heberger, though, the sticking point in negotiations concerned capital improvements.

CSLM’s lease had always required it to be responsible for all maintenance and capital improvements to the theater. The Crest’s last major upgrade was in 1995, when much of its original 1949 splendor was restored through a combination of funding from the Sacramento Housing and Redevelopment

Agency and the Briggs Trust. The chairs were reupholstered and the building received a new roof, carpet, paint and other improvements.

But that was 20 years ago, and the Crest is an old building. The air-conditioning system needs to be replaced. The roof is now 20 years old. The plumbing is even older. It will need a new carpet. And to show first-run movies, the theater will need a server-based digital projector system that costs close to $100,000. Emerick wanted a capital improvement program—detailing what was going to be upgraded and when—and a financial plan on how the items would get funded.

According to Garcia-Heberger, “We just couldn’t come to an agreement on what we felt we could afford and generate and what the building owner felt he needed to proceed with the building.” And so after 28 years, CSLM Inc. gave notice and ended its occupancy of the Crest Theatre on Oct. 31, 2014. A CHANGE IN OPERATIONS

Borroum’s and Emerick’s backgrounds do not suggest theater management as the obvious next steps in their careers. Both are engineers. Emerick received his bachelor’s, master’s and Ph.D. in civil engineering from UC Davis. In 1999, he joined Ecologic, an engineering firm in Rocklin, and worked on a variety of wastewater treatment projects.

Borroum, who is originally from St. Petersburg, Russia, and moved with her family to the United States in 1989, also studied at UC Davis. She received a bachelor’s degree in civil engineering and a master’s in environmental engineering. She also worked at Ecologic as an engineer.

In 2010, Ecologic was sold to Stantec, a large consulting firm based in Canada. Emerick had been a partner in Ecologic, and the year after the company was sold, he read that the Crest was for sale. He immediately considered purchasing it as an investment.

Dive Bar and Pizza Rock had not yet been built, but Emerick saw the potential. “I kept thinking K Street is some of the best real estate in Sacramento. If someone puts effort into K Street, it will turn,” he says. So in 2011, Emerick purchased the complex for about $2.8 million with the goal to protect and preserve it.

He didn’t plan to become the owner-manager of the theater when he bought the building, but he notes it may be better in the long run. “You have to have a vision of decades,” he adds, “not ‘How do I get by the next five or 10 years?’”

When taking over the Crest’s operations and bookings in November, Borroum turned to her project management background to tackle her new responsibilities. But the transition was not without a few hiccups.

The debut concert was set to feature Grammy-winning R&B singer Chrisette Michele, who also appeared on TV One’s “R&B Divas: Los Angeles.” The show was postponed and then canceled. The promoter, ReVamp, attributed the cancellation to “scheduling conflicts and the contractual network agreement with TV One.” Then, in December, the theater was briefly shut down by the Sacramento County health department for violations at the snack bar.

Although there have been nasty comments on social media, people who rent the venue are generally supportive; they recognize it will take time for Borroum and her team to reach the level of CSLM’s experience.

Scott Brill-Lehn, owner of SBL Entertainment, has done about 30 shows at the Crest since his first with Lindsey Buckingham in 2012. He initially went to the Crest because he needed a larger space but also feels it has marquee value. “Some people go to a show just because it’s there,” he says. Regarding the new management, “We got spoiled by CSLM. They knew what we expected because they had been doing it so long.” He finds dealing with the new management “more or less like any other venue.”

The Sacramento French Film Festival is also returning to the Crest June 19 to 28. Executive director Cécile Mouette Downs finds the size and beauty of the theater appealing. “It’s big, so we are never sold out,” she says. “And it is comfortable for us.” She is disappointed there’s still no digital cinema projector, but the festival screened “Cartoonists: Foot Soldiers of Democracy” in January, and it went well. “It will obviously be a little different because Yulya has only been running it since November. We need to be a little more responsible on our end because they don’t have the same experience.”

Probably the most exciting change at the Crest is Empress Tavern. Last year, the downstairs space that had housed the two unused screening rooms was gutted, and it is being transformed into a full-service restaurant, a partnership with Emerick, Thiemann, his wife, Lisa, and Ryan Donahue.

Whereas Thiemann’s other restaurant, Mother, is vegetarian, Empress will feature rotisserie meats as well as local produce and microbrewed beers. Theatergoers will be able to visit the restaurant and then take their food and drinks—including beer, wine and cocktails—throughout the theater, not just in limited areas. Because the Crest’s chairs don’t have trays like at Studio Movie Grill in Rocklin, Thiemann is making sure to develop foods that can travel—items people can comfortably eat off their laps.

Garcia-Heberger is now working with another historic Sacramento venue, Memorial Auditorium. A consultant for the city of Sacramento, she promotes Memorial Auditorium and Community Center Theater to producers and agents. Although she misses working at the Crest and with the Crest community (known as Cresties), she clearly enjoys her new job. “Every time I walk into Memorial Auditorium,” she says, “I look up at the spot where I sat when I saw Devo in 1981—my first concert ever—and I think my 16-year-old self would totally high-five my 49-year-old self.”

When asked about CSLM’s legacy, Garcia-Heberger looks thoughtful. “We took a closed building that was in bad shape and put it back into the hearts and minds of the citizens of Sacramento. The Crest will always be important to this community, and I like to think we did that.”

As for the future of the Crest Theatre, owner-operator Emerick is excited. A digital projector will come later, possibly at the end of the year, but in the meantime the theater has continued the tradition of showing cult and classic movies—“Pulp Fiction” (1994), “Chinatown” (1974) and “Rebel Without a Cause” (1955)—on a regular basis. Concerts are scheduled as well as community events. Emerick’s vision is to turn this quarter of a city block into an entertainment hub, and he hopes to eventually have a variety of events every day of the year.

“We have something magical, something unique,” he says. “We’re trying to bring together the food, the entertainment and the historic experience all in one place and make it a true artistic destination. I think we’re doing some really cool stuff. Every month gets better.”