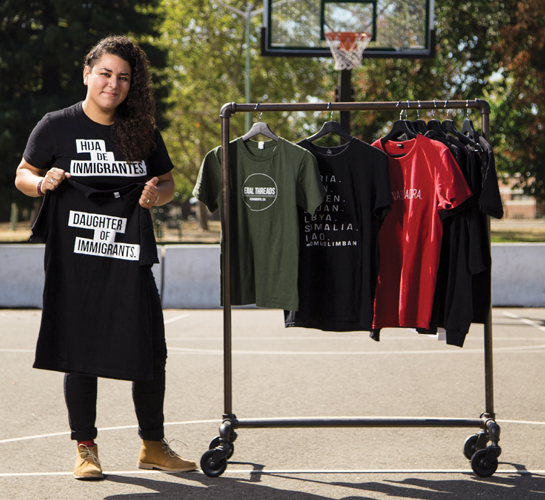 Some people wear their heart on their sleeve. In Gabby Schiavenato’s case, she wears her heart—and her politics—on a custom-made T-shirt of her own design. The 25-year-old Sacramentan founded her activist line of apparel, Equal Threads, in the wake of the 2016 election to draw attention to issues like immigration and the Muslim ban.

She sells the T-shirts from her online shop to customers in Sacramento and across the country. The most popular item—a list of the seven Muslim-majority countries named in the executive order issued by President Trump last January—is a subtle design that speaks volumes. “I’m constantly asked about it wherever I wear it,” says Schiavenato, who has sported the shirt in trips to Europe, Florida and Texas.

Another T-shirt declares simply “I am a Dreamer” in Spanish in reference to the DREAM Act, the legislation that would give undocumented immigrants who came to the United States as children a path toward legal status if they attend college or serve in the military. As Schiavenato sees it, “We’re all dreamers of one kind or another.