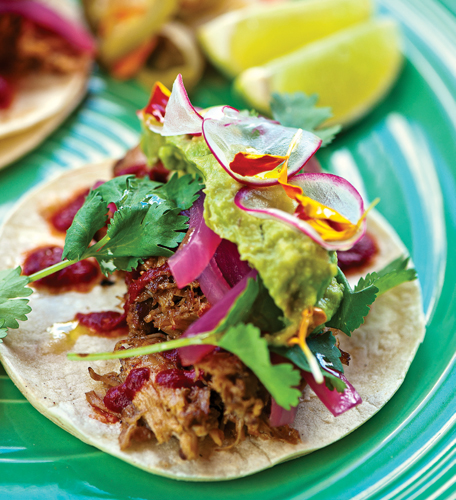 When Jay Peacock added a lamb burger to the menu of midtown bar The Golden Bear last summer, the newly hired executive chef initially planned to include shallots. A chef friend suggested he use the onion-flavored snack food Funyuns instead, and Peacock enthusiastically embraced the idea. We recently talked to Peacock about his concept of elevated bar food, his culinary history and the delicate task of balancing the old with the new. Food networking
I moved to San Francisco when I was 16 and got thrown into the restaurant business. I worked all over the place. Then, a chef that I had been following since I was young approached me about a job at Wayfare Tavern. His name was Joey Elenterio, and he was the youngest Michelin star recipient in America at that time. He taught me a whole new scale of food, about learning how to grow not only mentally and physically, but with an idea of respect toward cooking and cuisine. I came to Sacramento for Matt Masera, who I worked with at Wayfare Tavern. I approached him when he began to open Empress Tavern with Michael Thiemann, and it boomed from there. Sacramento comfort
The food scene here is more driven toward comfort and convenience. I like to say that my style is a mixture of comfort and higher end. For what we’re doing at Golden Bear, we’re trying to reach both notes. We want to maintain the comfortable atmosphere, but with a slightly elevated approach to things. I’m trying to bring in as much local produce and meat as I can, to showcase what we have here in our agriculture. Staying regular
I think that the regulars like the new food. I feel that it’s my job to help educate people about certain things that I can bring to the table, but also educate myself on what people are looking for in the town, and realizing that the regulars pay the bills. It’s something that I’m working on every day.