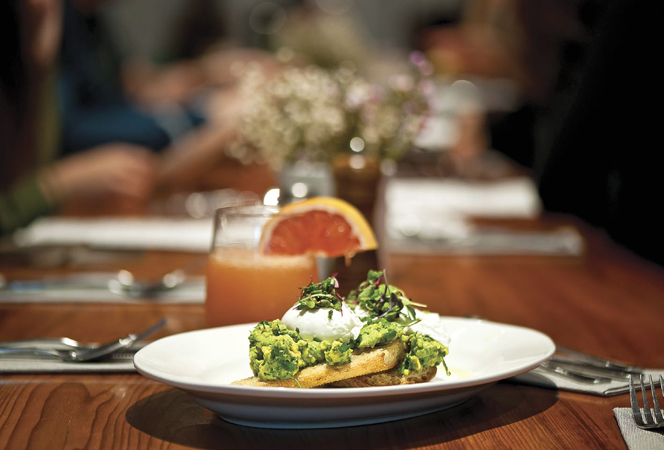 When Olga Turner launched Pushkin’s Bakery with her husband, Danny, in 2013, she had never before stepped foot in a commercial kitchen or even taken a cooking class. Against the odds, the bakery became a runaway success and is now considered Sacramento’s go-to spot for gluten-free goodies. “We definitely had our doubts along the way, but we just followed our gut instincts,” she says.

Four years later, those same instincts spurred the enterprising young couple to open Pushkin’s Restaurant, a brunch-and-lunch sit-down eatery on the bottom floor of one of midtown’s most striking new buildings.

“I’ve never worked as a chef, aside from making sandwiches at the bakery. I’ve never even worked in a restaurant. It’s been quite a learning curve,” says Turner, who seems almost surprised by the restaurant’s early success. “I didn’t know how it was all going to come together. But the feedback so far has been incredible.”

The couple created a bright, stylish restaurant serving the sort of hearty, healthful dishes that Turner likes to eat but hadn’t necessarily been able to find on local menus. “I’m not into the typical American breakfast, with pancakes and that sort of thing,” she explains. “I researched menus for three years and had a clear idea of what kind of food I wanted to have. I want people to come here and eat and be full but feel good afterward.”

The restaurant’s most popular dish—avo-cado toast—is an example of how simple ingredients are transformed into something special in this talented kitchen. A heap of mashed avocado is spooned over two slices of house-made bread, then topped with two poached eggs. It’s not a complex dish, but the attention to detail elevates it: perfectly cooked eggs, peppery olive oil drizzled across the plate, clover sprouts and chopped chives sprinkled atop the eggs.

Other customer favorites, like shakshuka (a satisfying dish of eggs baked in an aromatic tomato sauce), salmon quinoa bowl and crispy chicken sandwich, prove that diners needn’t settle for less when it comes to eating gluten-free. “We didn’t want to overemphasize the gluten-free aspect of the menu,” says Turner, asserting that the quality of the food stands on its own, even for those not looking to avoid gluten.

Like the food, the dining room itself has a fresh, modern quality. Crisp white walls, high ceilings and tall storefront windows lend the space an airy feel. As a labor of love (and to save money), Danny Turner built the furniture himself, including the display cases, the walnut banquette and the massive redwood community table that runs through the center of the room. A wall of plants in one corner softens the space. And the pepper mills on the tables are a thoughtful touch. (Why don’t more restaurants do that?)

The owners plan to offer dinner service at some point once they’ve got the brunch routine down pat. In the meantime, Pushkin’s has earned its designation as one of the city’s most promising new restaurants, and the couple couldn’t be happier. “We’re having fun,” Olga says. “I love being at the restaurant. We had a vision and we’ve stayed true to who we are.”