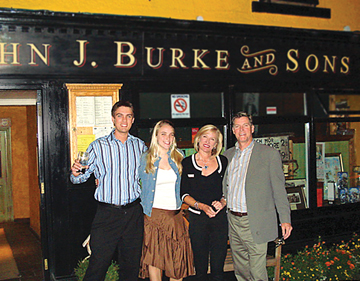 I returned from my first-ever trip to Ireland on Aug. 12. Seeing distant lands is vital to gaining a fuller perspective on life, although the long-distance air travel required can be laborious and exhausting, particularly for we who live in second- or third-tier travel cities like Sacramento. The paucity of direct long-distance and international flights from Sacramento makes such journeys longer in duration than they otherwise would be, because travelers must spend hours connecting to flights in other cities. Adding to that timeline are required early check-ins, flight delays and tighter security procedures. These elements made our travel time to and from Ireland a combined 50 hours, and included stops or changing planes in Denver, Frankfurt, Dublin, Shannon, Philadelphia and Phoenix. The journey was exhausting but worthwhile.

In making the trip, I achieved a lifelong dream of visiting Ireland, where both my mom’s and dad’s grandparents came from. The visit, as the Irish say, was grand. My son and daughter joined my wife and me for the first week, after which they returned home, and the two of us traveled on. The beauty of the land is indescribable, its serenity and greenness awe-inspiring, its people charming and friendly, its history poignant and ridden with drama and sadness.

Once there, we found land-based travel easy, as we had the services of a driver/guide named Frank Higgins. The astute Mr. Higgins was extremely knowledgeable about all things Irish&emdash;the land’s history and traditions, and, thankfully, driving on the left side of the road. On many of our travel days, we’d strike out early with Frank at the wheel, his Irish-lilted commentary as good as anything on the Discovery Channel.
Often he’d stop to reveal a surprise. Not only did he take us to the very castle that our cherished O’Brien clan built, but he also made a stop at the castle of the family’s purported black sheep, Cornelius O’Brien&emdash;a dastardly sort who some thought treated his tenant farmers badly, forcing them out during the famine of 1846â€“1849. Frank showed us a small plot of land in Kinsale overlooking Ireland’s south coast, where a nurse who worked in a New York hospital through the horrors of 9/11 has retired. There, she built a home and planted a grove of trees to honor of 300-plus firefighters and police officers who died when the World Trade Center towers collapsed. Each young tree has the name of a hero attached to it.

Another treasure Frank showed us: In a teeny, tiny village called Tully Cross, he brought us into a small church with three stained-glass windows created around the time of World War I by renowned artist Harry Clarke. Clarke’s work currently is featured in an Irish magazine, although Tully Cross isn’t even mentioned.

From a historic perspective, it is arguable that I shouldn’t complain about long-distance air travel. Traveling has been life-threatening since the earliest of times. I was reminded of this on Aug. 9, when Jennifer and I visited the Heritage Center in Cobh (pronounced cove), a port on the southern coast. The museum is devoted to the Irish emigration. It is probable that my ancestors&emdash;the O’Briens and Browns on my father’s side, and the Reillys and Judges on my mother’s side&emdash;departed from this port between 1840 and 1880, making the trip to the United States on a steamship in about a week’s time amid typically deplorable conditions. A touching bronze statue in the harbor shows a young lady, Annie Moore, and her two younger brothers preparing to depart for America, a trip millions of Irish made in the last half of the 19th century to seek a better life. (This journey killed many people, as the Irish were often crammed below deck.) The artist, Jeanne Rynhart, made two bronzes of Annie preparing to depart Ireland; the other is at Ellis Island in New York. Annie Moore was the first immigrant processed there.

So who am I to complain about the time it takes to travel? Wars, greed, ill will and other factors have impacted travel for centuries, and I suppose they will continue to do so. Yet as Sacramento grows, our airport is attracting more long-distance and international flights, which means shorter travel times.

The trip to Ireland was all I’d hoped it would be and more. We especially enjoyed the language of the people: Clever witticisms abound. Perhaps, while traveling in the future, I should take to heart the words of an Irish woman when we asked her for directions one afternoon while hiking: Well, you can get there from here, though it is a bit of a puff. How true.