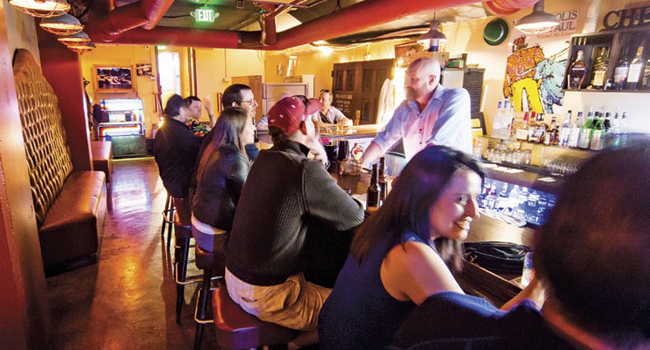 PBR fans, take note: Pre-Flite Lounge, downtown’s favorite dive bar, is back after a brief closure, and some argue it’s better than ever. The faux-wood paneling and super-cushy lounge chairs may be gone, but the new spot boasts a longer bar and some of the same kitsch that gave the original location much of its character.

Pre-Flite found itself without a home last year when Downtown Plaza was demolished to make way for the new Kings arena. Regulars were distraught, but owner Jason Yee kept matters in perspective.

“I was attached to the old location, but I understand change and I know there were a lot of businesses that needed to accommodate the growth of Sacramento for the new arena,” says Yee. “There were sad moments, but as a businessperson you have to grow and know that things happen for a reason. I am happy to be in a new location and to see the new arena go up. It’s great to see all the growth that’s happening downtown.”

Finding the new Pre-Flite takes some determination (and a smidge of daring). The dimly lit entrance on dumpster-lined Jazz Alley (east of 10th between J and K streets) is hardly obvious, and Yee prefers it that way. “Putting up a sign would be nice,” he says. “But I always ask people, ‘Do you want people to know you’re here?’ and they say no. I figure if I don’t have a sign, they’ll be harder to find.”

The subterranean bar was formerly a vault for the Wells Fargo Bank that once occupied the building, according to Yee. The interior is roomier, though arguably less cozy, than the original. Thankfully, the old jukebox made the move, as did the ’70s-era paneled doors, though they are now merely decorative. With more space came the ability to offer more beers on tap. Just don’t come expecting any fancy craft brews. Hungry patrons can order in food from nearby restaurants, including Pizza Rock, Dad’s Kitchen and Mother.

Yee is heartened by the thrum of business at the new location. “We have a pretty broad network of family and friends, and a lot of them followed us here,” he says, noting that Pre-Flite is his gift to the city. “I wanted to re-establish Pre-Flite for Sacramento,” says Yee. “I thought the city needed a place like this. There’s great bars out there, but giving people an option is a good thing.”

For more Eat & Drink stories and a listing of local restaurants, pick up the June issue, on sale now at local newsstands.