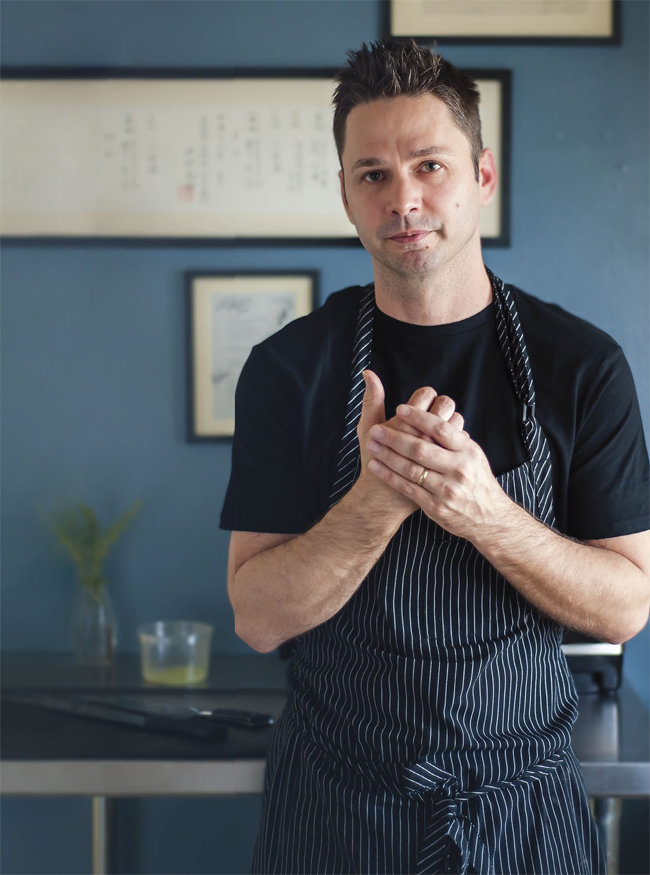 There are foodies, and then there is Josh Bieker. For the past several years, Bieker and his wife, Jade, have made annual treks to Michelin-starred restaurants in London, New York, Hong Kong and Copenhagen. By day a chef at Nugget Market, he uses his travels as a jumping-off point to create elaborate, multicourse pop-up dinners in his spare time. He cooks (along with assistants) while Jade—“my secret weapon,” as Bieker calls her—handles the creative tasks of room layout, floral arrangements and plating.

Bieker was never the same after reading famed chef Charlie Trotter’s cookbook nearly two decades ago. “It just blew me away,” he recalls. “I never was able to eat at his restaurant, but he was definitely one of my main inspirations back then. Charlie Trotter to me was what food could be: bright, colorful. It made sense. It was refined, opulent in a way but still somewhat simplistic.”

THE CALL TO TRAVEL

Traveling has “changed everything about who I wanted to be and how I viewed cuisine,” says Bieker. “In order to see the kind of cuisine I wanted to produce with the skills that I learned, I needed to go around the world.” Cookbooks or TV shows are no replacement for firsthand experience, according to Bieker: “You have to be sitting there, in that spot, and smell and see and understand. When my wife and I come back from these trips, we just want to work harder.”

“Japan blew me away, their sense of complex simplicity. We went with someone who lived there all her life, and she got us into some places that usually American tourists don’t get into. Everything was fantastic,” Bieker gushes. He also loved visiting Scandinavia. “I’m still trying to digest that trip: the restaurants that I ate at, the people that I met. I looked at my wife after that trip and said, ‘We have to raise our standard of what we want to do even higher.’”

Bieker had been putting on dinner parties for friends but wanted to push himself to a higher standard. Now, he and Jade host their pop-ups at a friend’s house. “We put everything we have creatively and mentally into these dinners. It’s exhausting. We hold ourselves up to a world-class standard.”

“Winter in Japan”: Raw hamachi atop creamed miso with salmon roe, seasonal fruit (often nectarine or Asian pear), daikon sprouts, emulsified ginger and an airy, citrusy “snow” made from yuzu, seaweed, lemon and simple syrup that is steeped, frozen, blended and dusted over the dish.