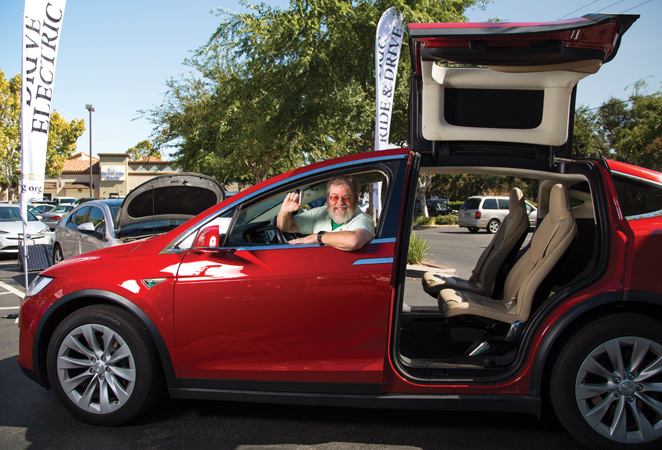 Now that electric vehicles have moved from the fringes of the automotive industry into the mainstream, many drivers are considering turning in the keys to their old gas guzzlers. But is a plug-in car right for you?

John Grindrod, manager of SMUD’s Drive Electric program, says there are plenty of reasons to consider buying an electric vehicle, whether it’s a plug-in hybrid, like the Chevy Volt, or an allelectric vehicle, like a Tesla or Nissan Leaf.

“They’re much more environmentally friendly. Even though electricity is generated, they run much more cleanly—roughly 70 percent cleaner than gasoline,” explains Grindrod. “They also have a lot less maintenance because there are a lot fewer moving parts. And there’s a convenience factor, too: The garage is your gas station.” There are also various financial incentives when you buy a plugin vehicle, including a federal tax credit up to $7,500 and a $599 rebate for SMUD customers.

For Granite Bay resident Guy Hall, an electric-vehicle enthusiast and past president of the Sacramento Electric Vehicle Association, it was the superior ride that first attracted him to EVs. “They’re just so much more fun and a much better driving experience,” says Hall, whose family drives a Tesla Model X, three Nissan Leafs and a Chevy Volt. “They’re certainly a lot peppier than their gas counterparts.” Still, the environmental benefits are not lost on him. “I think there’s no doubt that we have to move to electric vehicles to solve our air problems, to solve our national security problems,” says Hall.

One sticking point with allelectric vehicles is their range. Although battery technology is improving every year, there are limitations to how far an all-electric vehicle can travel on one charge. In general, the more expensive the vehicle, the farther it can go. The 2017 Tesla Model S, for example, starts at $68,000 and boasts a driving range of 335 miles, while the 2017 Kia Soul EV has a range of 93 miles and a $32,000 price tag.

But Hall and Grindrod both say that range anxiety—the popular term for the fear of running out of juice—is waning as the infrastructure for plug-in vehicles improves around the Sacramento region. These days there are charging stations at parking garages, public libraries and government agencies around the county.

Hall, who drove from California to Fairbanks, Alaska, in an electric vehicle, certainly hasn’t let range anxiety limit his travels. “I found electricity all along the way, sometimes at a repair shop or an RV park.”

SMUD offers a popular class covering the basics of electric vehicles for drivers who are considering making the switch. Hall says that test driving the cars and talking to current owners are also helpful ways to learn about whether an electric vehicle is right for you.

As for Grindrod, who drives a Nissan Leaf that he can plug in at work or at home, the decision to go electric was the right one for him. “I haven’t been to a gas station in months.”