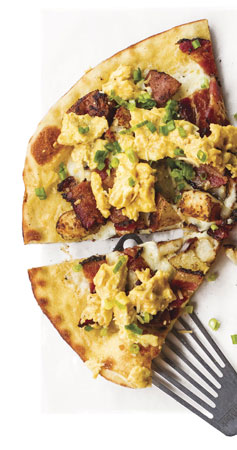 Pizza for breakfast is nothing new. Who hasn’t chowed down on a cold slice over the kitchen sink in a feeble attempt at morning nourishment? But you don’t have to settle for day-old pepperoni. Several local pizza joints serve bona fide breakfast pizzas topped with all your favorite morning-time ingredients: bacon, eggs, sausage, potatoes.

“One of the things about breakfast pizza is that it brings people together,” says Brian Fischer, who co-owns Buffalo Pizza & Ice Cream, Sacra-mento’s premier breakfast pizza purveyor, with his business partners from the nearby Capsity co-working space. That explains why breakfast pizzas are replacing doughnuts and bagels as the go-to item to bring into work, whether you toil at a construction site or a cubicle. “I think a lot of people use them as a tool to motivate teams,” says Fischer.

The customer favorite here is the classic bacon and egg pizza, but regulars know to watch for seasonal specials, which in the past have included unlikely combos like organic peach and bacon. The eggs at Buffalo are sourced from H&K Farms in Elverta and Vega Farms in Davis. Just don’t arrive here expecting breakfast for dinner; Buffalo closes daily at 2 p.m.
2600 21st St.; (916) 451-6555;
buffalobreakfastpizza.com

This family-owned joint serves its breakfast pizzas only on Sunday mornings, when football fans stream in to catch their favorite team on one of the big screens. Hand-tossed dough is topped with scrambled eggs, bacon, sausage and two kinds of cheese. A veggie version is also available. Both are served with a house-made chipotle salsa for dipping. “It’s definitely a very popular item with the NFL crowd,” says owner Garrett Ruiz. “And they go down really well with a bloody mary.”
9260 Sierra College Blvd.; Roseville; (916) 797-1100;
scoreboardspizza.com

The breakfast pizza at this hopping midtown dive begins with a crust slicked with garlic oil, then sprinkled with Parmesan and mozzarella cheeses, pepper bacon, country potatoes and green onion. What to drink with it? “The mimosa scene here is pretty strong,” says head chef Nick Carey. “We have a lot of enthusiastic guests come weekend mornings.”
2326 K St.; (916) 441-2242;
goldenbear916.com

This deconstructed version of a breakfast pizza is what you might expect if you were to order a Grand Slam breakfast in, say, Naples: two pieces of bacon, a breakfast link, a slice each of ham and turkey and a fried egg, all resting atop a house-made crust. Layla Kutternig, whose parents own this quaint cafe, says the breakfast pizza has been on the menu almost as long as the place has been in operation—26 years—and is as popular as ever.
2710 Fifth St., Davis; (530) 758-1331;
konditoreidavis.com