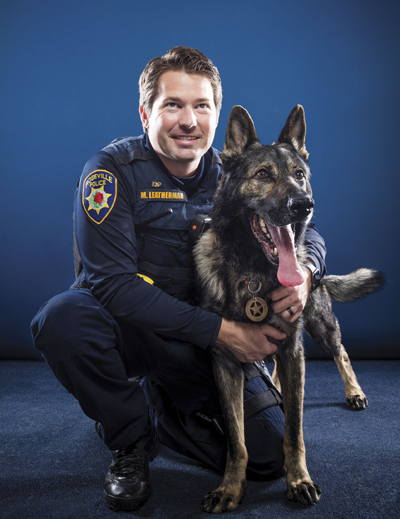 Dogs are man’s best friend, the saying goes. But if you ask local K-9 officers, they’ll tell you that dogs make the best partners, too.

Most law enforcement agencies in the area use K-9 officers for patrol duties, tracking suspects, and detection of explosives, firearms and narcotics. It’s a tight-knit community of dogs and handlers because there are only a handful of K-9 teams per department.

The bond between a handler and his or her K-9 can’t be overstated. For example, the partnership doesn’t end at the end of the shift. Police K-9s are part of the officer’s family, coming home with the officer every night and even living out their retirement years with the officer’s family after the dog’s working years are over. For law enforcement K-9s, the average working life is about seven years. The most popular breeds in patrol work are German shepherds and Belgian Malinois, but other breeds, including Labrador retrievers and hounds, also are very effective at detection work.

Nearly every officer we interviewed told us how loving and even-tempered their dogs are. One of the main misconceptions the public has, they say, is that K-9s are vicious and dangerous. Only when they need to be! Police dogs aren’t chosen for their ferocity but for their ability to stay on task, mixed with a good social demeanor. These are special, highly trained animals that have an impressive ability to “flip the switch” from work mode to play mode. They’re high energy and require a great deal of attention, but the officers who work with them wouldn’t have it any other way. Police K-9s and their handlers create lifelong bonds unlike any other in the law enforcement community, and they’re beloved in the cities where they work. Just watch the social media pages for our local law enforcement K-9 associations, and you’ll see quite a following: tremendous outpourings of congratulations at a dog’s success, and deep mourning when one is lost. ABOUT IGGY
Breed: German shepherd
Age: 7 years
Some details: He was born and raised in Placer County. The local vet refers to him as “the miracle dog” after Iggy survived a particularly lethal strain of parvovirus.
Career highlights: Iggy is responsible for more than 80 apprehensions.
Pet peeves: On cold nights, Iggy wants to sleep with his head on the pillow and takes up the whole bed. He will not move. Leatherman has to physically pick him up and move him out of the way. ABOUT KYE
Breed: Malinois/shepherd mix
Age: 7 years
Some details: She is the first female K-9 to work for the Elk Grove Police Department, and Smith is the first female K-9 handler to work there as well.
Career highlights: Kye is trained in patrol and firearms detection. She’s been in on numerous apprehensions in her four-year career.
Pet peeves: Kye is pretty darned smart, says Smith, maybe too smart. Smith always has to stay one step ahead of her. ABOUT JETTA
Breed: Belgian Malinois
Age: 2 years
Some details: She was born in the Czech Republic, and she’s the first female K-9 to work with the Sacramento County Sheriff’s Department.
Career highlights: Having just hit the streets, Jetta is still looking for her first apprehension.
Pet peeves: Jetta has a habit of barking for no reason when she’s in the car. ABOUT ROMAN
Breed: Belgian Malinois
Age: 3 years
Some details: At 100 pounds, Roman is big for his breed. (A Malinois usually weighs 65 to 75 pounds).
Career highlights: Roman has been directly involved in the arrest of 10 felony suspects.
Pet peeves: Roman eats and sleeps a lot—like a “needy teenager,” according to Emerson. ABOUT REX
Breed: Unknown
Age: Approximately 2 years
Some details: He’s a rescue. Also, unlike many other police K-9s, Rex is solely an explosives-sniffing dog. Partnered with Rath, a bomb technician, he can be seen often at Golden 1 Center, making sure the new arena is safe.
Career highlights: Rath and Rex have sniffed out countless explosives in training but have never found the real thing in downtown Sacramento.
Pet peeves: Rex has an unquenchable “toy drive.” He wants to spend nearly every waking moment hunting for a tennis ball. ABOUT APOLLO
Breed: German shepherd
Age: 10 years
Some details: His full name is “Apoll von Der Ost West Verbindung.” If you can’t tell by the name, he was born in Germany.
Career highlights: Apollo is trained in patrol and narcotics work. He has had more than 70 apprehensions.
Pet peeves: Apollo is pretty strong willed. Sometimes, to get him to do what he wants, Miszkewycz has to “think like a dog,” which doesn’t always come naturally. ABOUT CARLY
Breed: German shepherd
Age: 6 years
Some details: He was imported from Spain. At 90 pounds, he’s a pretty big boy.
Career highlights: Carly has had five bite apprehensions and dozens of no-bite apprehensions.
Pet peeves: Carly sheds a lot, and his hair flies all over the car. Having the windows down can be a mistake—hair goes everywhere. Sometimes he smells, says Tucker. All handlers get used to it, but anyone else will think the car stinks, no matter how much he’s bathed. ABOUT ROLLO
Breed: Dutch shepherd
Age: 10 years
Some details: Dutch shepherds tend to be slimmer and faster than German shepherds and tend to work longer. They’re very social, and good at community events. Rollo is especially great with kids. Matthew was Sac PD’s first female K-9 handler.
Career highlights: Rollo is trained in narcotics and patrol. Over the course of his career, he had more than 100 narcotics finds and nearly 75 suspect apprehensions.
Pet peeves: Matthew couldn’t leave the cage door open that connects the back and front seats of her patrol car. If she did, Rollo would jump into the front seat and drink her mocha in the cup holder.

There’s Nothing Selfish About Self-Care