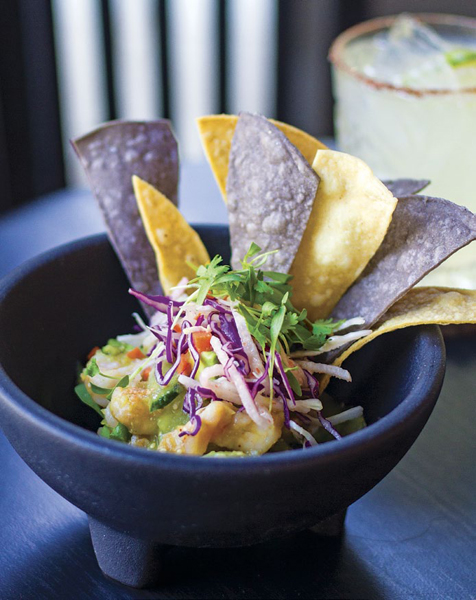 You’d think by now Sacramento would have had its fill of tacos. But that didn’t stop the city from signing a lease with Ernesto Delgado to open a fast-casual Mexican restaurant in Cesar Chavez Plaza downtown.

La Cosecha debuted this year on Cinco de Mayo, taking over a small, city-owned building on the park’s west side. Delgado, the owner of Tequila Museo Mayahuel on nearby K Street, hired a pair of restaurant veterans—chef Adam Pechal and bartender Chris Sinclair—to create the food and cocktail menus.

La Cosecha isn’t strictly Mexican; Sacra-Mexican is more like it. Pechal’s fusion menu marries Mexican cuisine with Sacramento ingredients. The emphasis is on fresh, seasonal and local. (La Cosecha is Spanish for “the harvest.”) On Wednesdays, Pechal ducks out of the restaurant and heads to the farmers market in the plaza for inspiration and a bit of shopping. A case of strawberries might end up in that week’s aqua fresca; sunburst squash will make an appearance in quesadillas and ceviche. If peaches are in season, they’ll wind up in the salsa. And when corn is at its peak, Pechal will add elote—grilled Mexican street corn—to the menu. Even the beans in the Mission-style burrito are local: heirloom Eye of the Goat beans from Elegant Beans in Lodi. The menu is a work in progress, but it’s anchored by a few stalwarts: queso fundido, a molten blend of three cheeses and house-made chorizo, served in a cast-iron skillet; carne asada, grilled Angus beef marinated in lime juice and Worcestershire sauce; and four varieties of taco (carnitas, carne asada, achiote chicken and vegetarian).

There are some Pechal quirks, as well. There’s no rice on the menu, because Pechal hates rice, and the tortas are made with Acme bread from Oakland, not traditional fluffy torta rolls. Known for his burger at his old restaurants (Tuli Bistro and Restaurant Thir13en), Pechal put a Mexican-flavored burger and fries on the menu at La Cosecha.

Similarly, Sinclair’s craft cocktail menu is a Mexi-mento mash-up. The blue-tinted Adios Muchachos is a play on the classic Adios Motherf’er, made with tequila and mescal instead of vodka and gin, and the Mezcal Mule uses mescal in place of vodka. There are two bars, one indoors, the other opening up onto the sunny patio via a roll-up door, with stools outside. The outdoor bar gives the place a mellow, beach-vacation vibe—a pleasant contrast to the all-business office buildings across the street. A word about La Cosecha’s location: Cesar Chavez Plaza is everything that’s both great and not so great about Sacramento. On the great side, it’s a bustling public square, home to a farmers market, numerous outdoor festivals and Friday-night concerts in the park in the summer. On the not-so-great side, it’s definitely an urban park, with many of the attendant ills (panhandling, public drunkenness). Pechal recently looked out one of the restaurant’s windows to see a woman in the plaza remove all her clothing and scale the park’s marble water fountain. A crowd gathered as several police officers tried to coax her down. “Never a dull moment,” he said.