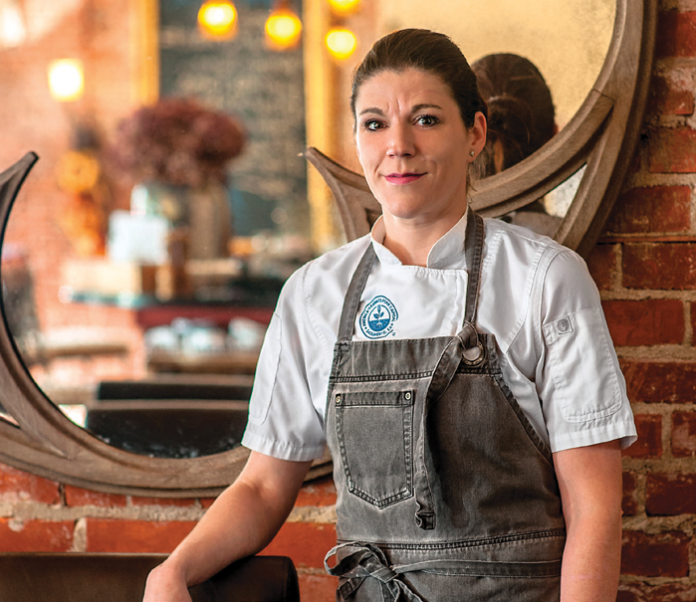 How one chef earned a loyal fandom—minus the hoopla.

Casey Shideler of Taylor’s Kitchen in Land Park has been wowing diners with her inventive take on seasonal fare since she became executive chef there in 2016—and, perhaps most notably, she’s done it with little fanfare compared to other local chefs of her caliber. We recently talked with the 31-year-old about her evolution as a chef, the mentorship that launched her career, and what it meant to have to start over.

Kitchen-table memories
Ironically enough, I was an incredibly picky eater. I wouldn’t even eat peanut butter and jelly; I just wanted cheese sandwiches. Also, my family didn’t cook much at all. A lot of the food we ate came out of cans. We didn’t eat much fresh produce. When I moved to California at age 25, there were so many things I had never even heard of or at least hadn’t seen fresh.

The road to chefdom
After high school I went to art school, but I had addiction issues that went on for six or seven years. I eventually decided to go to culinary school in Kansas, but I was drinking heavily at the time and wasn’t passionate about it. It wasn’t until I stopped drinking that I felt that passion and realized I was good at cooking and started thriving. But I really don’t credit any of my skills now to my schooling in Kansas. I credit it to working in the kitchens here in Sacramento.

A meaningful mentorship
Patrick Mulvaney was just what I needed to thrive. I ran the line at Mulvaney’s for almost two years. It was a really difficult position for just being a line-cook position. I don’t think that I would be as resilient or competent as I am now if I didn’t have those experiences of going through the trenches. It taught me to deal with every kind of situation. No matter what was going on, we had to find a way to make it work. So much of this job is about problem solving, and I learned so much problem solving from Patrick.

A fresh start
I relapsed briefly and needed to take 30 days off of work. I wasn’t sure if I would come back to the industry. Then I took a position at Taylor’s in 2015. It was humbling because I went from Mulvaney’s to working for $12 an hour as a pantry cook. But once I was able to work in that position and get some confidence back, I was able to take off.

A simple approach
I think that you can have nice fine-dining food without pretention. If you look at my dishes, they have precision and I try to make them artistic and look nice. But even if they seem complicated, they’re actually very simple. They’re very accessible flavors that appeal to most people, even if it isn’t necessarily something that they’ve tried before.

Running as therapy
I’m very high-strung individual, and I run a lot to keep myself calm. I’ve been sober about three and a half years. If I didn’t run, I don’t know what I would do.