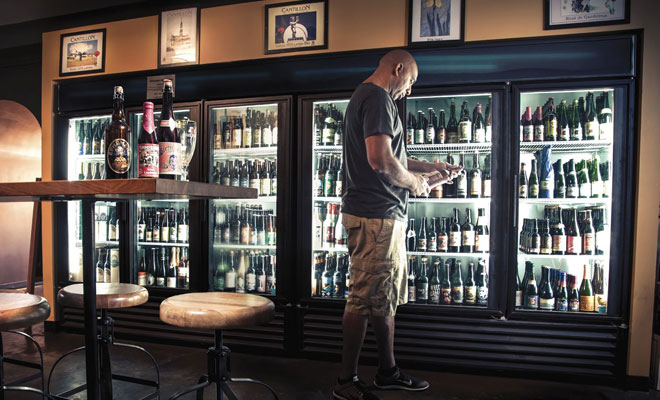 Now that Sacramento is indisputably a beer town, it’s hip to be a beer geek. As in virtually any geek subculture, your seriousness as a fan is measured by the obscurity of your knowledge and the exclusivity of your experiences. In other words, how many rare beers you’ve tasted.

Getting your hands on a rare beer (known in beer parlance as a “white whale” because of the Captain Ahab-like commitment required to find it) takes strategizing, networking and budgeting. Don’t let that one time you scored a bottle of Pliny the Elder fool you; while that beer is a white whale in New York, it isn’t here.

Looking to boost your rare-brewski cred? The easiest way is to drop by local bottle shops and grocery stores on a regular basis and strike up a conversation with the beer buyer. These people can tell you what’s trending, what’s all hype and no substance, what’s coming in next and what they’re hiding in the back for discerning customers. This technique works best when you’re looking for a trendy but not super-rare beer (I got Clown Shoes’ Photosphere Phil this way) or a beer with a time-limited but widespread release. (Think any of Firestone Walker’s Proprietor’s Reserve Series.) A couple of weeks back, the buyer at Roco Wine & Spirits slipped two Crux Fermentation Project beers in my hand and advised me to post photos of the bottles on social media. “They are Instagram gold,” he told me.

The next step in your quest for rare beers: Hit up rare beer night and tap takeover events at local brewpubs. You may have to shell out big for a ticket, but sometimes the only price you have to pay is a long wait before you get your 4-ounce taster. I recently queued for an hour to get a sip of Pliny the Younger (not to be confused with its Elder counterpart) at University of Beer, and it was plenty worth it.

Then, hit the Internet. Craigslist, Reddit, BeerAdvocate and RateBeer all have forums that connect you with beer lovers around the world who may be interested in a trade. This is where your easy access to Pliny the Elder and other top-notch regional beers comes in handy. Your Internet buddy in Vermont with the grade-A can of Heady Topper desperately wants the beer that you casually bought at the supermarket. Not long ago, I traded with some Chicago beer lovers: They got Russian River’s Supplication and Blind Pig, and I got New Glarus’ Wisconsin Belgian Red, Half Acre’s Daisy Cutter and Bell’s Two Hearted Ale. Score.

The last way to up your beer reputation is what I’ve dubbed The Secret, named after the best-selling book about manifesting your wishes through positive thinking. Say you’re dying to have a Bourbon County Vanilla Rye or a Drie Fonteinen Framboos. You’ve got to live it, breathe it and mention it every time you talk to someone who knows even the slightest thing about beer. Tell your bartender, your beer buyer and your fellow beer nerds. Manifest that beer. You never know when someone who owns one will overhear you and offer to share a bottle. The only rule of The Secret: Pay it forward and share your white whales with other beer nerds. Again, I’ve used this technique in my own life and found myself sipping a Samuel Adams Utopia, retailing for upward of $200 for a single bottle.

Don’t lose sight of beer’s egalitarian nature: Beer nerdery mustn’t become beer snobbery. Still, for beer lovers, some of the fun is the thrill of the hunt. Those white whales are there for the taking, if you’re ready to put in the effort.