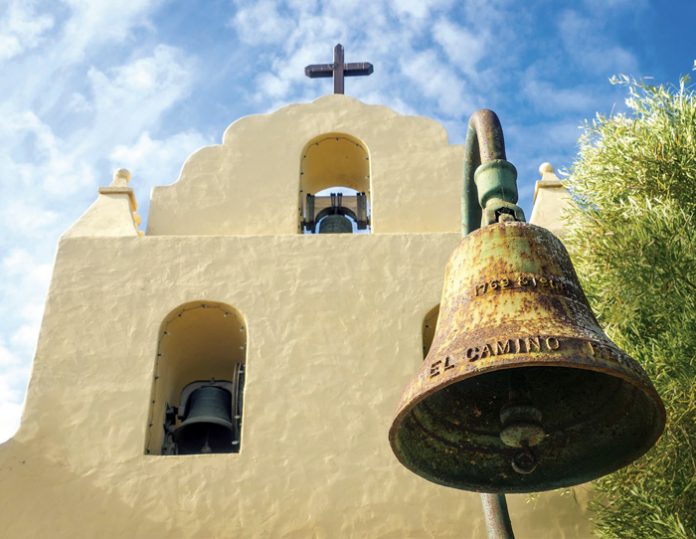 In the celebrated 2004 film “Sideways,” divorced and depressed writer and wine devotee Miles Raymond takes his former college roommate, Jack Cole, on a road trip through California’s sleepy Santa Ynez Valley. Jack is about to get married, and the journey is less about reflecting on the momentous occasion before him than it is about sowing some last wild oats. Miles, on the other hand, hopes for some tranquil days of golf and wine tasting. With that, the duo and their storyline vagabond every bit as pleasantly as the quaint country roads meander through the valley’s rolling vineyards and hills.

I first saw “Sideways” while living in Berlin, in the midst of a typically long and icy Northern European winter. The film’s sunny landscape took my breath away; as a native Californian, I fought homesickness those first few years living abroad, and my admiration for the state only expanded over the decades. The film’s humor, irrepressible bonhomie and charm were like a warm blanket. Moreover, I was struck by this rather—what seemed to me—unsung nook of the Golden State, and I wondered why I hadn’t much heard about its natural beauty. Someday, I thought, I’ll get there.

As it happened, a visit to Santa Ynez was inevitable because of another California interest of mine: the state’s 21 Spanish missions. Starting in 2007, during my annual visits to California, I would visit one or two of the venerable colonial landmarks, intending to eventually see all of them. By spring of this year, I was down to the last two, both of them in the Santa Ynez Valley: Mission Santa Inés and Mission La Purísima Concepción, which is a state park.

My friend Stacey and I attended St. Mary Elementary School in Sacramento and, like all fourth-graders in California, we had had to learn about the missions. As my hobby to see all of them took shape, I could gradually recall almost verbatim the history lessons: By 1769, Spain had colonized Mexico and was intent on securing coastal access and expanding across present-day California. To do so, the Spanish government and the Catholic Church sought to convert the Native Americans in the region, eventually founding 21 missions, along with four presidios, or forts. Drive along the old El Camino Real, or the royal road, which is today Highway 101, and you’ll see the milestone bells that alert travelers to a nearby mission.

While Stacey may not be as fervent about seeing all of the missions, she happily agreed to join me on my final quest to bag the last two, in part because of her affection, like mine, for “Sideways.” So, despite rainy skies during Presidents Day weekend and some mild fear of mudslides, we eagerly set our compass to follow in Miles and Jack’s tire tracks.

Aside from the lush and mesmerizing vineyards that cover the Santa Ynez Valley’s wavelike hills, which were in particularly vibrant form after weeks of heavy rains, there is also Solvang. Settled by Danish immigrants starting in the 1850s, the town—whose name means “sunny field”—today is more Danish than Denmark. From its well-preserved gabled and half-timbered facades to its windmills, a replica of the Little Mermaid, references here and there to Hans Christian Andersen, and quaint bakeries selling—what else?—Danish pastries, Solvang is delightfully charming. We arrived late, checked in quickly to the Holiday Inn Express, and then headed out on foot along the main drag, Mission Street, occasionally tucking into the pedestrian side streets Atterdag Road and Copenhagen Street, where we were amused at shops selling clogs, embroidered pinafores and elaborately carved wooden Advent calendars. It was rainy and misty, just like most days in Northern Europe, so we were happy for the spicy, warm and fragrant red pepper soup with feta cheese at Solvang Brewing Company. The warmly French vanilla-hued Mission Santa Inés, which was built in 1820, is in Solvang, and the adobe structure seems somewhat out of place amid a nearby Dutch windmill and shops with windows shrouded in lace curtains and with flower boxes at their entryways. Moreover, as we entered the mission grounds, we found a fiesta underway, with tamales for sale and young men and women in colorful folkloric garb crooning Mexican ballads.

Santa Inés was one of the last of the missions to be built, and its museum has the most extensive collection of well-preserved church vestments worn by the friars of early California. They date from the 15th century to 1718; the ones on display that we saw were rich in floral designs on silk, satin and damask. Among them was one reputedly worn by Father Junípero Serra. I also admired intricate Gregorian chant manuscripts from the mission period. Before this, Stacey and I spent some time in the mission’s Chapel of the Madonnas, where a stunning Black Madonna and a rendering of Our Lady of Guadalupe flank a small altar with a golden Madonna and child sculpture as a centerpiece.

It was still gray and drizzling when we left Santa Inés via its pretty courtyard, in search of a place to warm ourselves, not to mention sample Solvang’s renowned pastries. We ended up at Birkholm’s Bakery & Cafe and were clearly not alone in search of what the Danes call hygge. Pronounced “hoo-guh,” the term translates roughly into “a quality of coziness and comfortable conviviality that engenders a feeling of contentment or well-being.” I ordered a cup of Earl Grey and Stacey had her latte; we split a warm, crispy raspberry Danish at one of the tables in the cafe’s winter garden. With the persistent rain, the atmosphere was indeed cozy and comfortable. We were careful, however, to save our appetites for a bit later, for we had earlier snagged a coveted reservation at The Hitching Post II in nearby Buellton. In an early scene from “Sideways,” Miles sits perched at The Hitching Post’s bar, expertly testing and rhapsodizing about the wine selection, while Jack reminisces about his early—and now long-gone—success as a soap opera star. Soon they meet Maya, their pretty and congenial waitress, who later mesmerizes Miles—as well as, I’m willing to bet, every audience member watching—with her poetic Dionysian take on the pleasures of good wine.

We were both giddy at entering The Hitching Post II, which, despite the film’s success and its spotlight on the restaurant, retains an unassuming ambience. Looking over the 12-page wine list, we giggled that it included a merlot, a varietal that Miles rails against for what he perceives as mediocrity. I ordered a glass of the Buttonwood sauvignon blanc to accompany the Diestel turkey steak; both were delectable. And before that, Stacey and I eagerly awaited one of The Hitching Post’s signature appetizers: grilled artichoke, seasoned with its self-proclaimed “Magic Stuff” and served with a spicy smoked tomato mayonnaise. Artichoke petals are famously stingy with their meat, but no matter: The taste was to die for.

Earlier in the day, before visiting Mission Santa Inés, we had taken advantage of a sunny morning and set out early across the verdant hills stretching past Lompoc and to the coast. Our journey was too early for the explosion of color from the larkspur, delphinium and bells of Ireland that ripples across the Lompoc Valley between May and September; I’d picked up a brochure at our hotel the evening before about the wildflowers, thinking that I’d have to return someday for that. Meanwhile, we marveled at the vineyards covering the green hills, stretching off into the horizon, as we made our way to Mission La Purísima Concepción, some 20 miles from Solvang.

As we paid our fee at the entrance to the state park, I could already see the handsome pink adobe facade and three bells therein. Purísima’s distinct exterior had made an impression on me even as a fourth-grader; looking at paintings of the mission back then, it seemed to me to be on a remote bucolic plain. I recalled this childhood vision as we entered the grounds, for it struck me then that among all the missions I’d now visited, Purísima serves perhaps as our best inkling of what the Spanish missionaries witnessed four centuries ago, located as it is in a hamlet near the Santa Maria River and 10 miles from the Gaviota coastline. It is also maybe one of the most beloved of the missions, for as Stacey and I explored the grounds, we came across several enthusiastic and welcoming volunteers, all dressed in endearing period costume. Some demonstrated bread baking in a stone oven, alongside two teenage girls churning butter. Another dressed as a friar led a group of visitors in and out of the mission’s alcoves, and several women showed the delicate handwork of gathering wool and weaving. I later read that Purísima is the most extensively restored of the missions and is among the most popular, with nearly 200,000 visitors per year—an impressive figure considering its relative isolation. As Stacey and I chatted with the bakers, a Spanish-speaking family joined us and said that they were visiting from Madrid, noting that they had learned little of the missions in school there.

But in this atmosphere, I could easily imagine the missionaries and their lives, as well as why Purísima would end up with a rather unique appearance compared to its 20 siblings. When the Spaniards arrived in the area, they encountered the Chumash Indians, who, historians say, were curious about and peaceful toward the newcomers. Purísima’s design—the mission was founded Dec. 8, 1787, by the Franciscan Fermín Francisco Lasuén and was the 11th in the chain—would reflect this relationship, with a more open layout. By 1812, the Franciscans had converted more than 1,500 of the Chumash; the mission sprawled for miles in every direction, replete with aqueducts, corrals, gardens, traditional tule homes and even a dormitory for unwed women.

We had been so taken with the entire look and feel of Purísima that I barely realized we’d somehow missed the chapel. Backtracking, we entered the stunning nave and approached the altar, which is beautifully restored and painted in soft shades of pink and blue. We also took our time strolling the gardens and even coaxed a corralled burro to look our way so we could snap a photo. All in all, it was easy to anoint Purísima my favorite of the missions, for its charming and elegant pink facade and the idyllic setting that transported me back in time.

And this, by the way, is also a poignant message from “Sideways.” At the story’s end, Miles is utterly defeated: His book manuscript has been rejected yet again, he’s learned his ex-wife is pregnant, and the nascent romance with Maya—with whom he’d timidly shared his book manuscript—has gone off the rails because of an unintended deception. Back in San Diego, he one day returns to his apartment to hear a phone message from Maya, who has painstakingly read the massive manuscript, and she offers Miles warm encouragement. In the final scene, Miles has returned to the Santa Ynez Valley and is seen knocking on Maya’s apartment door. We’ll never know what happened next, but I do know that I, too, will someday return to this quiet, beguiling valley. Indeed, the flowers of Lompoc already beckon.