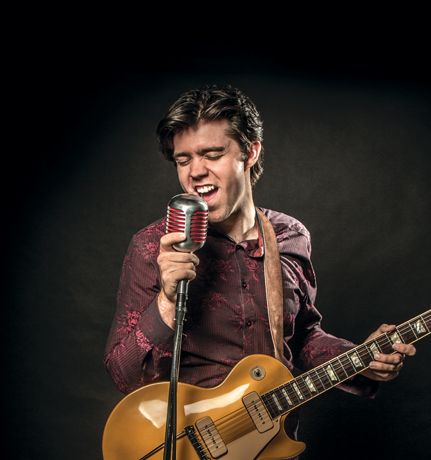 Todd Morgan is an old soul. At 27, he sports slick-backed hair and retro clothes while passionately pounding out “Great Balls of Fire” or “Big Hunk o’ Love” in the spirit of the ’50s rockers who have inspired him, including Jerry Lee Lewis, Little Richard and, of course, Elvis.

A local native, Morgan says his earliest musical memory goes back to “maybe 1 year old,” when his musically inclined parents played “Chuck Berry’s Greatest Hits.” The die was cast. He tried piano lessons at age 5 and again as an early teen, but mostly Morgan taught himself, his keen ear leading the way. “I hated lessons,” he recalls. “But I loved music.” The work paid off: At 14, he played his first professional gig. At Rio Americano High, he not only played in the jazz band, but fell in love with jazz. He counts Louis Armstrong, Duke Ellington and Elton John among his influences.

With his current band, the Emblems, Morgan keeps a ferocious schedule of live shows and recording sessions, with an EP and three albums released, and another on the way. You can catch Morgan at Harlow’s (2708 J St.) on Dec. 12, performing as part of the “Santa Rhumba Extravaganza,” a benefit for the Front Street Animal Shelter.