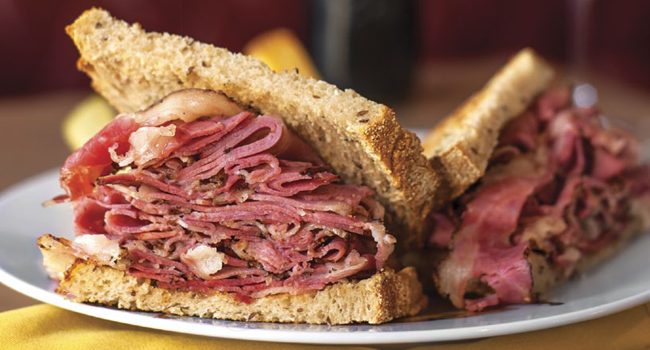 The times they are a-changin’. Already, the arena’s sleek, angled facade is reflecting light onto the streets of downtown, but as much as Sacramentans are looking forward to change, they also want to preserve the landmarks that have defined this city. That’s what Michael Gelber set out to do when he opened RailBridge Cellars & Company in February on the ground floor of the historic Elks Tower at 11th and J streets.

Gelber is president of Alexis Ventures, which owns RailBridge Cellars, an urban winery just a few blocks away on North 16th Street. For his new restaurant, he strove to maintain the Elks Tower building’s historic elements. “We were really trying to keep the history of the building,” he says. “If you walk through, the idea is for people to see different components of it—almost like a walk through time.” From the marble underfoot to the lighting overhead, every detail has a story. Carrara marble, imported from Italy in 1920 and used at the Stanley Mosk Library and Courts Building at Ninth and Capitol Mall, was repurposed for the restaurant’s floor. The light fixtures, a blend of Tiffany and art deco-style stained glass, were salvaged from the building’s basement. Even the steel I-beam in the restaurant bar pays homage to the reinforced-steel Elks Tower building and to Gelber’s father-in-law, who once owned a steel company.

But the coolest addition to the restaurant space came about by subtraction. Gelber replaced an interior wall with a window that offers a view of a subterranean pool where Elks frolicked long ago. Today, Gelber likes to imagine lodge members “down there swimming naked and jolly and smoking cigars.” The space is now used as an underground lounge that RailBridge rents out for private events for a $275 flat fee and a $1,000 food minimum. (RailBridge also offers wine tastings by appointment in the 13th floor Penthouse Lounge.)

“There was no doubt in my mind this would work,” says Gelber of the window and restaurant’s period elements. “People in Sacramento are looking for more, [something] like New York, Tribeca, old school. Usually, people spend thousands of dollars to make something look this old. We just had to polish it up, open the windows to let people look in.”

Gelber and executive chef Christian Sieck (formerly of Enotria) created a menu to match the restaurant’s cosmopolitan identity. Food is served from morning till night: coffee and house-made pastries in the a.m., soups, salads and sandwiches from 11 a.m. until close, entrees like pan-seared salmon and grilled skirt steak in the evening. The restaurant’s signature pastrami sandwich, a nod to Gelber’s New York roots, is made with meat from Brent’s Deli in LA.

The robust wine list, curated by Gelber’s partner Michael Chandler, features local and international selections along with RailBridge wines such as 3 Strands pinot noir. (The name is a reference to the three freeways surrounding downtown.) The food is designed to be paired with the wines. Even the pastrami sandwich? “Yeah,” says Gelber with a laugh. “I think a merlot or cab goes fantastic with it.”