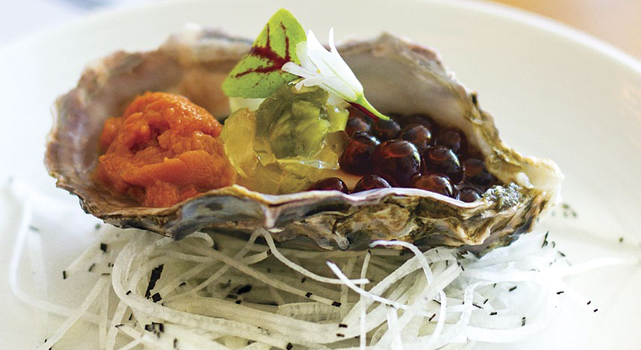 Sacramento has a well-earned reputation as a meat-and-potatoes town. But that didn’t stop Andy Mirabell from opening Skool, a hip new midtown restaurant that focuses like a laser beam on seafood.

Mirabell and his partner, Toshihiro Nagano, opened their first Skool in 2010 in San Francisco. The pair, who met while working at Blowfish Sushi in the Bay Area, wanted to create a casual, affordable restaurant serving a hybrid of Japanese and California cuisine: light, fresh, healthy and fun. Located in San Francisco’s Design District, Skool was a hit with the techies who worked nearby at companies like Zynga and Adobe.

Wanting to expand, they started looking outside San Francisco at properties in Oakland, Marin and San Luis Obispo. Then Mirabell, who grew up in Sierra Oaks and went to Jesuit High, realized that Sacramento was the smaller sandbox the pair was looking for. Just before Valentine’s Day, the pair, along with their wives, opened Skool in the old Anatolian Table space on K Street. The menu (cleverly printed on lined notebook paper and attached to a board with a No. 2 pencil) focuses on sustainable seafood from the Pacific and local freshwaters—unglamorous, underutilized species like sardines and squid. The food is playful, with dishes like smoked salmon chips (fried salmon skin with miso aioli) and barbecued fish ribs made from pacu, a piranha-like fish with ribs broad enough to treat like pork spareribs. The restaurant’s signature dish is uni flan, a sea urchin custard topped with fresh uni and fleur de sel. It’s an unintimidating preparation for people uncomfortable with idea of eating uni (sea urchin gonads).

In addition to raw and cured dishes like amberjack crudo and cured sardine, there are char-grilled dishes such as grilled squid and grilled oysters—a Japanese take on oysters Rockefeller—and entrees like clams and mussels steamed in sake and served with skinny fries—a twist on the classic Belgian moules frites. And if spaghetti and cioppino had a baby, it would be the restaurant’s squid ink spaghettina: squid ink spaghetti with squid and shrimp in lemongrass dashi broth.

The brunch menu, served on Saturday and Sunday, is even more whimsical, featuring fishy takes on chicken and waffles (with a fried oyster subbing for chicken) and shrimp and grits (squid ink grits topped with the catch of the day). For diners who simply can’t give it up for seafood, there’s a Kobe burger available at both brunch and dinner.

Nagano’s wife, Hiroko, oversees the two-item dessert menu: panna cotta made with seasonal fruit, and matcha white chocolate cake in a jar. Both have a Japanese sensibility—not too sweet or too rich.

Skool has a compact beverage list that focuses on local wines (Boneshaker Zinfandel, Dry Creek Chenin Blanc, Michael David Incognito and Klinker Brick rose), along with sakes and shochus. Because the restaurant doesn’t have a full liquor license, Mirabell says they had to get creative with the cocktail program, using wine and aperitifs instead of spirits. The Lower Manhattan, for instance, is a lower-alcohol version of a manhattan made with Cocchi Americano rather than whiskey.

Now living back in Sacramento with his wife, Olia Kedik, and their small child, Mirabell is bullish on his hometown’s future as a food city. “There are more San Franciscans coming here,” he says. “I love to see what’s happening in Sacramento.”