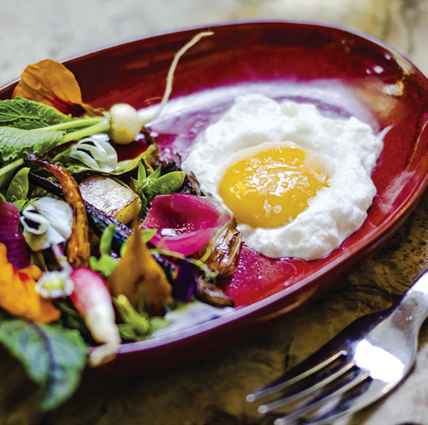 One of the biggest food trends of recent years has been the egg on top of things. Egg on a burger. Egg on pasta. Egg on pizza. Egg on just about anything you can think of.

The egg is a culinary flourish that many chefs just can’t resist. Poached or pickled, boiled or fried, the humble egg adds a fillip of fatty deliciousness to all manner of dishes—from Bacon & Butter’s B&B burger (a delightful mashup of breakfast and lunch) to Ella’s famed pappardelle with lemon butter and egg, a dish that migrated to the menu at Ella’s sister restaurant, OBO’. There’s nothing like the ooze of a perfectly runny yolk for extra richness and indulgence. “It’s the perfect little thing,” says Kevin Ritchey, executive chef for the restaurant group that includes Shady Lady Saloon and Amaro Bistro & Bar.

Ritchey loves finding ways to squeeze eggs onto his dishes. One of his favorite salads is the traditional French bistro salade Lyonnaise, made with frisee, lardons and a poached egg. It’s a dish that he says may find its way onto one of his menus this summer. At Shady Lady, customers can add a fried egg to any of the sandwiches on the menu for an extra $1.50. And at Amaro, the Pollo pizza is topped with chicken, spinach and mushrooms and drizzled with egg white before it goes into the clay-hearth oven. When the pizza is halfway baked, a yolk is popped into the center of it so that it’s cooked but still runny. Finished with a sprinkling of sage and crispy chicken skin, the pizza is a witty celebration of the chicken and its egg. At Localis, chef/owner Chris Barnum-Dann dazzles diners with the inventiveness of his egg cookery. For a recent tasting menu, he served fire-roasted spring vegetables—kohlrabi, baby carrots, beets and baby red onion—with a trompe l’oeil “fried egg.” To create the illusion, he cooked an egg yolk sous vide style, then surrounded it with a circle of goat milk espuma that resembled the egg’s white. He wanted people to say, “Oh, it looks like a fried egg, but it doesn’t taste like a plain fried egg.”

For a main course, Barnum-Dann prepares house-made Sichuan pepper tagliatelle with braised Llano Seco pork and a six-minute egg that he pops into a warm pickling solution for extra flavor. “Everyone loves to see that egg yolk pop,” he says. His most popular egg-centric dish is an amuse-bouche featuring a tiny fried quail egg topped with shavings of salt-cured duck yolk. Casey Shideler, the executive chef at Taylor’s Kitchen, believes eggs make everything taste better. “Eggs go nicely with a very large range of things, from super sophisticated to super simple,” she says. In summer, she pairs eggs with seasonal vegetables like corn and tomatoes. In spring, she adds a poached egg to a salad of roasted asparagus and smoked maitake mushrooms. When the diner cuts the egg open, the liquid yolk mixes with the salad’s vinaigrette for a do-it-yourself sauce.

Shideler also uses an egg to add interest to pan-fried veal sweetbreads. She soft-poaches the egg, then breads and flash-fries it so it’s crisp on the outside. It’s a bit like a Scotch egg without the sausage.