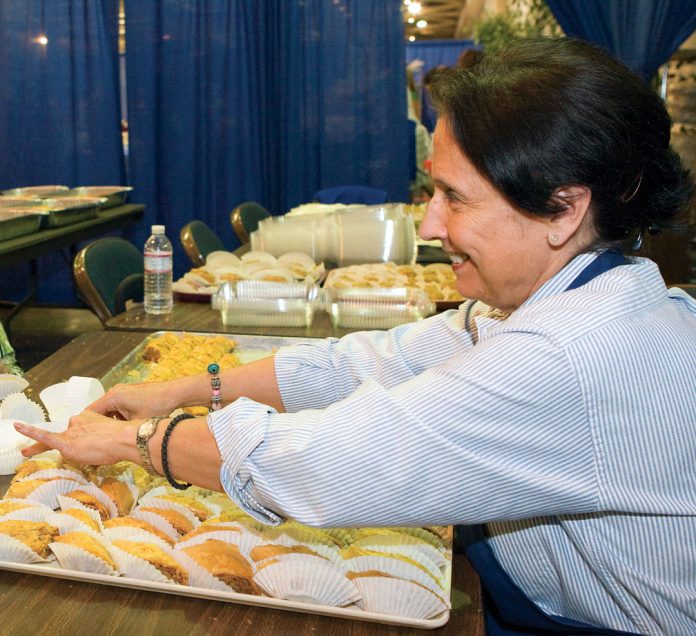 You’ve gotta get over your fear of phyllo if you want to cook Greek, says Maria Sampanis, who jokingly refers to herself as the baklava queen of the Sacramento Greek Festival. “Spanakopita, tiropita, baklava—the whole Greek arsenal is predicated on phyllo,” says Sampanis, a full-blooded Greek and longtime festival volunteer whose “regular” job is teaching at Sac State. (She’s a political science/government prof.)

Now in its 48th year, the festival—scheduled as usual for Labor Day weekend (Sept. 2-4) at Sacramento Convention Center—is a full-out cultural celebration, complete with dancing, an agora (Greek marketplace) and more. But whom are we kidding? When you come right down to it, it’s all about the eats, and not just for the commoners: Even local celebrity chef Patrick Mulvaney has been spotted there, scarfing down a gyro.

HOW DID YOU END UP AS “BAKLAVA QUEEN”? I’ve been involved in prep work for some of the other food items in previous years. I inherited the job of baklava chair several years ago, but not because of any particular prowess. The irony is that I don’t even make it the rest of the year. Once a year is enough.

WHAT DOES IT INVOLVE? We have to do things in stages. We start with maybe about a dozen of the big 25-pound boxes of walnuts, and chop the nuts with Cuisinarts. We mix the nuts with the sugar and spices for the nut filling in the middle. Then on the day we’re actually preparing the baklava, we get everything ready—phyllo defrosting, plenty of melted butter—and we make the baklava and freeze it. But you can’t bake it in advance, so a few days before the festival we gather and make the syrup, a combination of sugar and honey—that’s another multi-hour undertaking. The day before the festival, we bake the baklava and pour the syrup over it to try to get that incredible, complete flavor.

HOW MUCH BAKLAVA ARE WE TALKING ABOUT? I think we came in around 7,500 pieces last year, but in previous years we’ve done more, so somewhere between that and 10,000.

OBVIOUSLY YOU AND YOUR HELPERS DON’T HAVE A FEAR OF PHYLLO. Some people don’t even want to touch it. That’s why we do a “fear of phyllo” cooking demonstration at the festival—to help people just get over it.

WHAT IS IT ABOUT GREEK FOOD THAT APPEALS TO THE MASSES? The whole cuisine is elegant in its simplicity. The olive oil, the lemon, the oregano—the freshness, the lightness. It’s not complex