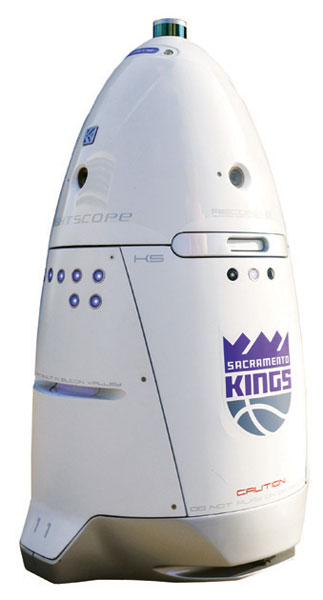 For the past few months, a new security guard has been patrolling the plaza outside Golden 1 Center. The guard is 5 feet tall, weighs more than 400 pounds and works 24/7, with only occasional breaks to recharge.

In case you haven’t already guessed, the downtown arena’s new guard is a robot.

Designed by Mountain View-based Knightscope, it looks like R2-D2 and moves like a Roomba. Known as an “autonomous data machine,” the robot is programmed to sweep the plaza and look for anomalies: a change in temperature, a suspicious package, a gas leak. It has more than 30 sensors and can take 360-degree video, perform thermal imaging and communicate with bystanders and with an operator inside the arena. And it’s cute, to boot.

“It looks and feels friendly,” says Ryan Montoya, the Sacramento Kings’ chief technology officer. “Fans stop by to take photos and selfies.” When NBA commissioner Adam Silver was introduced to the robot, he got too close, causing the machine to set off an alarm.

For the Kings, there are advantages to having a droid instead of a flesh-and-blood security guard. It doesn’t require overtime or coffee breaks. And it’s almost indefatigable: When the robot runs out of power, it parks itself on a rubber charging pad next to the arena, powers up for 20 minutes and then it’s back to work.