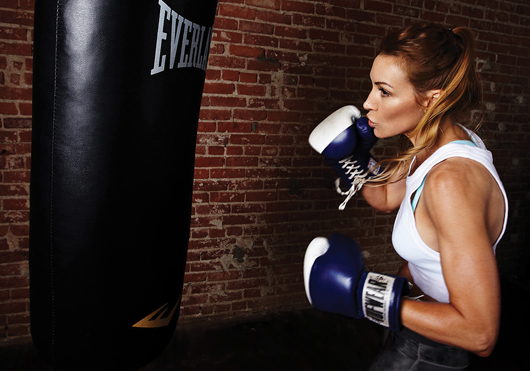 Legendary Sacramento-grown female boxing pioneer Cary Williams hit reset five years ago. First known for founding Prime Time Boxing in Sacramento in 1998 and becoming a boxer herself, she gained notoriety and evolved into an Olympic-level boxing coach. Now she’s shifted home base to Santa Monica, and her Too Pretty brand of fitness wear is landing her on reality television and in the lives of girls and women who find her empowering theme resonates with them. The shows she appears in, A&E’s “Fit to Fat to Fit” and CNBC’s “Billion Dollar Buyer,” air in January.

How did boxing become your thing?
When I was finishing high school, I met a professional boxer. A year after college, I realized there are people who want to learn how to box but don’t necessarily want to be a fighter. So I read “Business Plans for Dummies” and got a loan to open a boxing club. I was 26; everyone thought I was crazy!

Was fighting the goal?
First, I ran the business, then I trained to be a trainer. But it felt hypocritical to train people in boxing when I’d never boxed before, so I decided to compete. It was absolutely backward! I competed for six years before hanging up my gloves to focus on other things.

What sparked Too Pretty?
As a fighter, everyone’s first reaction was, “You’re too pretty.” It was meant to be a compliment, but it bothered me. So five years ago, I thought I’d make some fun T-shirts: “Never too pretty to hit like a boy.” Girls were empowered, and it sparked me to think maybe this could be something that’s broader than boxing.

What defines you now?
My mom died at age 33. Five years ago, I realized her purpose was to bring me into the world. If I don’t do something with it, what was it all worth for her? I’ve worked with many young girls in the boxing world, and now they reach out to me and tell me how I affected their lives. That’s priceless. If I can touch more people with the brand, then I’m doing something.

And boxing’s role?
Now I only have one boxing club in Santa Monica—The Stables—but I do manage the business and the training. It’s a one-woman show.

How did you debut as a reality show star?
“Billion Dollar Buyer” wanted an athleisure brand, and since I have leggings and T-shirts, I applied. The first part of filming was fun, telling the story behind Too Pretty. I got to do the punch mitts with Tilman Fertitta in the boxing ring. The second filming was more stressful.

Is it true you had to gain (and lose) 40 pounds?
This woman from “Fit to Fat to Fit” called me about the show, but when she said I’d have to gain weight, I said, “I don’t want to do it.” But I’m glad I did it. It was really eye-opening for me. People were actually nicer when I was heavier. It was so hard to lose the weight, partially due to my age. It changed my body.