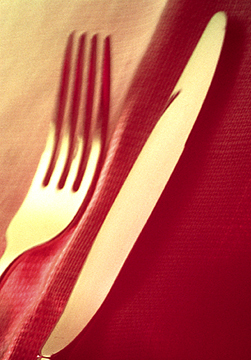 Devotees of television’s Dr. Phil are familiar with the phrase ‘that looks like nine miles of bad road ahead,’ a reference to an upcoming patch of trouble. Its utterance might prompt some to chuckle, others to wince or if they’re chef Patrick Mulvaney simply nod with weary recognition. Mulvaney knows bad roads: He has traveled many a rough mile this past year on his journey to open his own restaurant.

The challenges with which Mulvaney has wrestled include a lengthy and ‘nasty’ lawsuit, he says, that dominated his attention in 2005. So it’s safe to assume that he opened the door to Mulvaney’s Building & Loan in mid-March with giddy relief. At long last, he was able to welcome diners into his very own space, to shower them with the ‘let me care for you’ hospitality that characterizes his generous, affable personality. ‘In a perfect world,’ he recently said, he hoped people would simply show up, plop in a chair and say, ‘I’m hungry, Patrick. Please give me something good to eat.’

Mulvaney’s goal was to create a restaurant that encourages convivial interaction between his cooks, his guests and the front-of-the-house staff. His ‘open kitchen’ concept is not Randall Selland’s Kitchen, where dinner is theater and every movement is narrated with a flourish and a smile, nor is it a flashy demonstration kitchen where sweaty grill and saute cooks work furiously behind a glass partition.

Rather, several serious, absorbed cooks hunker over a long, wooden worktable that also happens to serve as the locus of the cozy restaurant. One night we visited as two young cooks shoved red chunks of lamb into a humming meat grinder. Moments later, as I leaned over the table to peer into bowls of ingredients (patrons are encouraged to stroll around freely), Mulvaney placed a hot, crispy mound of fennel chorizo in my hand prepared from the lamb I had just watched being ground. No plate, no napkin, no warning he just plunked it into my hand. It is this quirky attitude that defines the restaurant, from the basketball hoop affixed high on the gorgeous, century-old brick walls to the unusual bar area, awkwardly operated out of a massive antique sideboard at the back of the restaurant.

The space is steeped in colorful history. A firehouse from 1893 to the early 1980s, it served as New Helvetia Roasters and Bakers before Mulvaney took over the space a few years ago for his catering operation, Culinary Specialists. The patio, which Mulvaney will open up for seating in warm weather, stabled the firehouse’s horse team.

Tables are crammed together in the 35-seat restaurant. On a busy night, it’s loud and crowded as Mulvaney sails cheerfully from table to table, warmly greeting patrons he knows and welcoming the ones he doesn’t. And while we enjoyed watching his friendly ministrations, there were times we wondered if the kitchen staff might need his energy and attention more than his customers do.

An enthusiastic supporter of the ‘eat seasonal, eat local’ dictum, Mulvaney gets many of his ingredients from small farmers in the Sacramento region. His philosophy is to use first-rate products and manipulate them as little as possible. The menu is short and changes constantly. (One night, there were four ‘large plates’ from which to choose, plus two pastas and five starters.)

One staple is the delectable New York steak Mulvaney, adorned with silky foie gras butter and served with peppery sautÃ…Â½ed arugula and baked potato wedges. Meat may be the restaurant’s true mÃ…Â½tier: Don’t miss Mulvaney’s falling-off-the-bone braised lamb shank, sprinkled with gremolata, the traditional Italian seasoning of garlic, lemon zest and parsley, whose citrusy zing acts as a refreshing counterpoint to the richness of the meat. There’s also a wonderfully moist, mesquite-smoked two-bone pork chop, beautifully cross-hatched from the grill.

Mulvaney is a big fan of greens, and nowhere are they more lovingly handled than in his ravioli. We inhaled one version, drizzled with toasty brown butter and stuffed with nettles, red mustard, chard and spinach from West Sacramento’s Del Rio Botanicals farm. The most stunning dish we encountered was a plate of plump ravioli with a sweet, earthy filling of Chiogga beets and beet greens, glistening in a meaty veal reduction and decorated with pink-and-white-striped beet wedges that looked like jewels.

Other impressive items are a hearty bowl of clams and mussels, steamed in Guinness beer and sparkling wine, and loaded with crunchy chunks of fennel; a fatty, tender square of braised pork belly atop a pile of warm cabbage and velvety-soft butter beans; and a heavenly fillet of salmon, crispy and flaky, accompanied by tender roasted turnips and red potatoes.