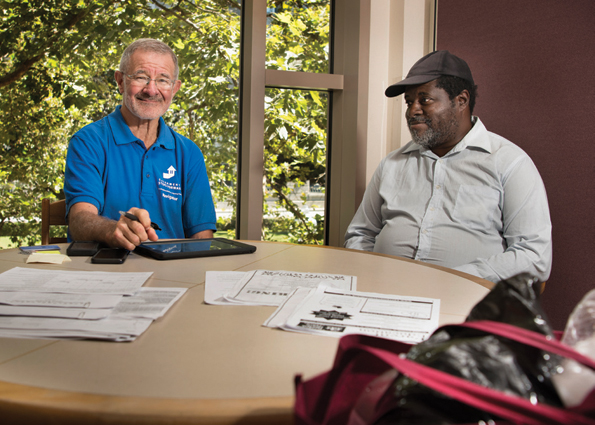 Connecting the homeless to housing and other services requires meeting them where they’re at—and in many cases, that place is the public library. Sacramento’s libraries are among the few spaces where people without a stable place to live can readily access the internet to search for housing or employment, recharge their phone or simply find refuge from the daily grind of living on the streets.

Rivkah Sass, executive director of the Sacramento Public Library, believes that libraries are uniquely positioned to serve the homeless because everyone is welcome there, regardless of circumstance.

“We’re this special organism. We serve everybody,” says Sass. “The library is the heart of the community. We really are the last little bastion of democracy in action because anybody can use us. You can walk in the door and we are free and open and accessible to anybody.”

Sacramento Steps Forward, a nonprofit agency whose mission is to help connect the homeless to housing and other resources, has even assigned an outreach person to downtown’s central library, a practice that the organization’s executive director, Ryan Loofbourrow, says is common in large and midsize cities.

In 2016, the library navigator housed 62 individuals and families; helped 37 households get access to mental health treatment; and got 25 individuals into alcohol/drug treatment or detox. The navigator also assisted 90 people with securing an identification card. Without one, it’s difficult to apply for a job or get access to services.

One of the challenges of serving the homeless at the library is that it isn’t always obvious which patrons are without housing. As Sass points out, “Just because they’re waiting at the doors when the library opens doesn’t mean that they are homeless. I think it’s a really important stereotype for us to look at.” Loofbourrow agrees. “We all make assumptions about what homelessness looks like or doesn’t look like. Oftentimes, we find that we can’t make those assumptions.” His agency’s navigator, Michael Degner, connects with people in need by talking with patrons throughout the library about what he does.

“Michael’s a very endearing person, so as he makes conversation with the general population, people will avail themselves to him or will refer others,” says Loofbourrow. Library staffers also refer patrons to Degner if they come across someone in need.

“A library is about information and about helping people figure out what resources they need,” says Sass. “The navigator does exactly that, and he does a great job.”

In addition, the central library offers a weekly program dubbed Recharge where patrons can recharge phones or other devices while experiencing all that a modern library has to offer. “Sometimes there will be a craft, sometimes a movie. It’s an opportunity for people to be together. It offers a bit of normalcy for people who don’t have normalcy in their lives,” explains Sass.

She is adamant that libraries can and should be part of addressing Sacramento’s homelessness crisis. “We don’t have enough compassion in the world for people who are different from us. If we can address that in our own tiny way in the library, then the world really will be a better place.”