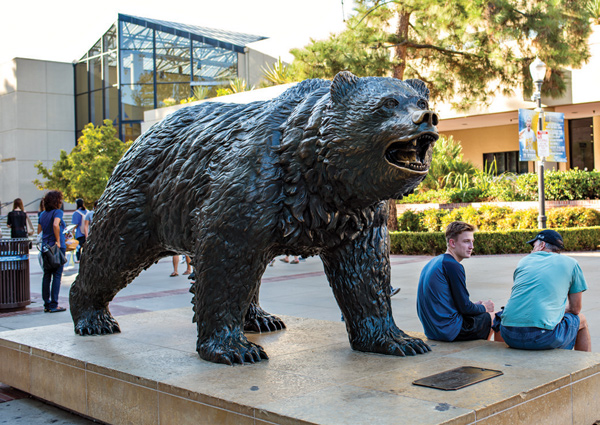 Even though Charles “Chuck” Halnan has been a successful self-employed California lobbyist for more than 30 years (his client list has included such all-star business names as Amazon), his most monumental achievement might be a side business he began in 1983.

U.S. Monuments Plus, which Halnan runs out of his office across from the State Capitol, creates statues and other sculpted tributes for institutions, individuals and companies. His most iconic monuments to date include UCLA’s The Bruin, a one-and-a-half-times-to-scale creation that Huffington Post recently rated No. 3 in its “most-loved statues” survey; UC Irvine’s Peter the Anteater statue; and a stone memorial at San Francisco’s Embarcadero honoring seven West Coast merchant seamen killed in the Vietnam War.

“I’m not the artist; I’m the broker,” says Halnan, who lives in Carmichael. “I can’t even draw a believable stick figure, but I know good art when I see it.”

In fact, the Phoenix native grew up seeing it. His paternal grandmother, Metra Hildreth, who moved to Phoenix from Ohio as a single mom, began working as a buyer for the late Sen. Barry Goldwater’s eponymous family store. “She’d buy things for our family as well as the store, and I was surrounded by kachina dolls from the Hopi reservation, paintings, baskets and all sorts of Western art.”

Halnan modestly describes himself as the monuments middleman. “I meet with the clients, find out what they want to do, then find the artist and fabricator to bring their dream to life,” he says. “Sometimes there’s a lot of back-and-forth among those three groups. But it’s understandable if you think of a sculpture as a form of biography, something someone will see forever.”

In 1978, Halnan began working in public relations, then moved into lobbying, for the Atchison, Topeka and Santa Fe Railroad (the company Judy Garland sang about in the 1946 musical “The Harvey Girls”). As a side gig while working in Albuquerque, he began selling plaster of Paris mini-sculptures, all originals, of cowboys, Native Americans and frontiersmen for $10 a pop. “There was a foundry 15 miles from where I lived, so it was pretty convenient,” he recalls. Then one day, one of his sculptures was broken during shipping. “And I asked myself at that moment, ‘What if I could sell one monumental sculpture at a time instead of a bunch of little ones?’” Through a series of connections, he found out that UCLA wanted to create a monument of its mascot, an almost generic bruin (essentially, a European brown bear). So he advertised in the Albuquerque area for sculptors and was flooded with responses. (This was, after all, artist-heavy New Mexico.) “I finally got the pool down to about five or six people I thought I could work with,” he says. “I had them make models. I just told them the model had to be closer to a grizzly bear than a panda, and the rest was up to them.” Halnan selected Albuquerque-based artist Billy Fitzgerald for the job. The client liked the finished piece, and since the beginning it’s been a magnet for UCLA students and their families. For more information: usmonumentsplus.com

Reflect: Entertainment for a Summer Night