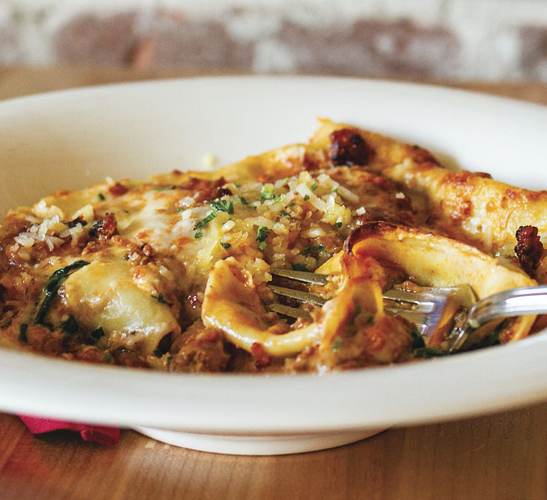 UNTIL RECENTLY, Sacramento was shockingly underserved in the Italian-restaurant department. For that, perhaps, we should blame Biba Caggiano. After all, she set the bar awfully high when she opened Biba on Capitol Avenue 30 years ago.

But Italian restaurants are finally starting to appear around town. There’s OBO’, the Sellands’ fast-casual Italian place in East Sac, and Hawks Public House, which, if not exactly Italian, is certainly Italian-inspired. Now there’s Amaro, a casually ambitious pizza-and-pasta restaurant from the owners of Shady Lady Saloon.

The Shady guys—Alex Origoni, Jason Boggs and Garrett Van Vleck—teamed up with Abe Cunningham, a drummer with the local band Deftones, to open Amaro in an old brick warehouse on R Street, next to Warehouse Artist Lofts. The building is owned by Bay Miry and Ali Youssefi, a pair of young developers who are responsible for much of what’s new and exciting on the R Street Corridor.

Initially, Miry wanted a quick-serve pizzeria in that building. But that wham-bam-thank-you-ma’am idea eventually morphed into a higher-end concept: made-from-scratch pizza dough and pasta, an in-house pastry chef and an innovative craft cocktail program.

But first, getting the restaurant open was a bear. Built in the early 1900s, the building was made of unsupported masonry, and falling bricks threatened the structure with collapse. It had to be held up with massive new steel supports that the owners decided to leave exposed, giving the place an industrial-chic air. Then they vaulted the ceiling up to the second story and decorated the upper walls with library shelves of red-backed books and framed reproductions by the likes of Canaletto, Raphael and Tintoretto. The Renaissance portraits of red-hatted Italian bishops and cardinals will seem very familiar to fans of HBO’s “The Young Pope.” As for the menu, it is Italian through and through. Pizzas come out of a gas-fired, clay-hearth oven. Executive chef Kevin Ritchie experimented until he came up with a thin yet sturdy crust that is not quite Neapolitan. “I wanted something crisp with a slight chew,” he explains. “Something that still tastes good the next morning.” Pastas are made in-house. The lasagna is a single pasta ribbon that’s folded onto itself several times and layered with bechamel, Bolognese sauce, spinach, fontina and Orland Farms’ Ricottage (a cross between cottage cheese and ricotta). Each serving is baked individually, so it has plenty of the crispy brown edges that everyone loves. Linguine carbonara is a traditional take on the classic dish, with just five ingredients: pasta, egg, pancetta, Parmesan and pepper—although Ritchie says he may change it up a bit with the seasons, possibly adding peas or asparagus in the spring.

Amaro’s pastry chef is Carissa Jones, the former owner of Sugar & Spice Specialty Desserts. She puts an elevated spin on classics such as tiramisu: house-made ladyfingers layered with mascarpone mousse and so much Marsala and coffee liqueur that she’s reluctant to serve it to children. The cannoli is filled with whipped ricotta salata, which is drier than traditional ricotta, and the panna cotta is scented with fresh citrus and poured on the diagonal into a clear glass for an arrestingly modern presentation.

Fittingly, Amaro’s cocktails are made with Amaro, an herbal liqueur with a notably bitter taste. (“Amaro” is Italian for “bitter.”) They come out of a house-kegged draft system with 25 handles and three temperature zones for serving cocktails, wines and beers. It’s an approach Origoni calls “equipment forward.” That it frees the bartenders from the time-consuming labor of making craft cocktails to order is “a fringe benefit,” he says.