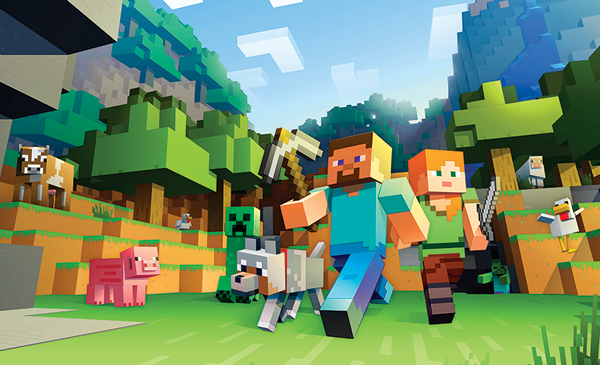 For Christmas 1986 my father gave me—let’s be honest, gave himself—the newly released Nintendo Entertainment System. He often sent me to bed early and I would sneak into the hallway and watch him play. I was just 4 years old then, but already Mario, Luigi and Princess Peach were becoming my childhood companions, parts of my culture and language, my very Weltanschauung.

That was more than 30 years ago, but I still miss those 8-bit graphics and the pixels I could count on my television screen. Meanwhile my 9-year-old son carries the Internet and virtual reality in his pocket. And yet, despite graphics that blur the line between games and reality, my son, like every other warm-blooded child with opposable thumbs, prefers the stripped-down, proletarian world of Minecraft.

That’s right. My son’s favorite pastime is to become a blue-collar avatar who endlessly (and apparently pointlessly) mines the Overworld for ore. And despite being a child of the age of flash and dazzle, he loves immersing himself in the blockiest, most expressionless graphics among modern videogames, and all as a protagonist named Steve. Steve. At least the name Mario is exotic.

Although my gaming days are mostly behind me, I occasionally get excited about a new release, but I missed the boat on Minecraft, which technically was released in 2011, when my son wasn’t quite yet three-years-old (not fully developed thumbs, you see). But I didn’t need my son to tell me that Minecraft was something unique, something Mario-esque.

He didn’t have to tell me, but he did anyway. He was about 4 when he came home from his cousin’s house speaking in tongues.

“Jacob let me play his Minecraft, and we went to the Netherworld, and he has a diamond pickaxe, and he had to fight creepers, and then we saw Endermen, and then . . .”

And then it began. My son began breathing Minecraft, and when he wasn’t playing the game, he would read books about it, or even watch other people play it on YouTube, which is just weird. That was when he first told me he wanted to be a YouTuber.

“That, or the next Notch,” he clarified.

That is, Markus Persson, one of the creators of Minecraft who just happens to be worth over a billion dollars after selling Minecraft to Microsoft for $2.4 billion, but that’s not even what interests my kid. He just likes the game.

I get it. I idolized Shigeru Miyamoto, the creator of Nintendo, and even in college I dreamed of moving to Japan to become a video game designer (joke’s on me, I became a writer). So yeah, I get it, and whereas my mom warned that I would rot my brain if I played too many video games, I’m over here thinking, a billion dollars, son, are you sure you’re don’t want to play more?

Still, I don’t really know what Minecraft is. I’ve tried, and even played with my son, but I haven’t a clue what’s going on. The game is glorified Legos, which we both love, but there’s something about it that eludes me, no matter how much (and it’s quite much) my son talks about it.

But I’m not worried, even though WHO validated video game addiction by including “gaming disorder” in its 11th Revision of the International Classification of Diseases in 2018. Sure, video game addiction is probably real, but I turned out all right, right? And my son is the kind of kid who voluntarily says, “I think I should shut off the game now,” or “I think I’d rather read.” I’ve never had to ask him twice to turn off Minecraft, though a couple times he’s kindly asked if he could make it to a checkpoint first. Truth is, I couldn’t have designed a better kid if I could have done it in Minecraft, so when a friend asked if I planned to take my son to Minefaire (minefaire.com), the “official Minecraft community event” at the Sacramento Convention on Sept. 22 and 23, I knew I had to—mostly to see his reaction, but also maybe to learn a thing about the game my son loves so much. That’s worth a $45 ticket.

When I gave him the news that I got us tickets for Minefaire, he would have started danced if he weren’t strapped into the backseat of the car.

“Dad, Dad! Will FGTV be there? I hope Angry Orange is there.”

“I don’t know, dude. But I know there will be YouTubers there, and we’ll get to meet them,” I said.

“And maybe then we can start our own YouTube channel?” he asked.

So that’s the plan: Hit the convention, get a few pointers, start our own YouTube channel, and make a billion bucks. Or just a million. Nobody can call me greedy.

We’ve already picked our channel’s name: The Adventures of Moo and Boo, by Moo and Boo Media, LLC. He’s Boo and I’m Moo. We’ll know more after we hit the convention, but at least we’ll have something we can build upon. And that, my son tells me, is what Minecraft is all about.