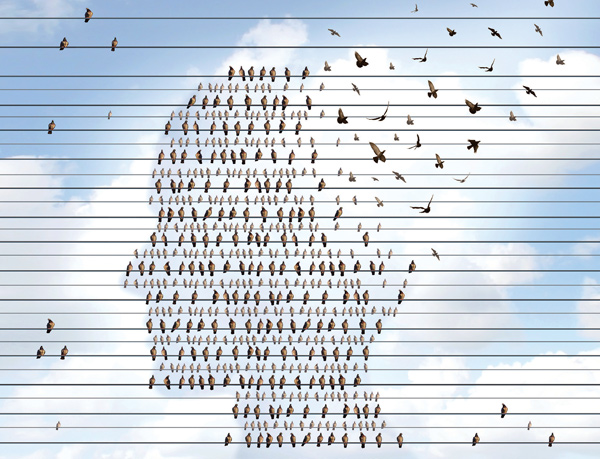 Marilyn Reynolds had permitted herself just a couple hours’ respite with her cellphone off. But when the movie got out, ominous messages awaited. Her husband, Mike, had been arrested and was being held in restraints at Marshall Hospital in Placerville. Earlier that day, he’d become agitated at the memory care facility where he lived. In response to being offered orange juice, he had defiantly pushed an attendant to the ground. He’d shoved a resident. He’d kicked another resident’s dog and repeatedly screamed “F— you!” at the woman, causing her such cardiac distress that she required an ambulance. When the director tried to defuse the situation, Mike had kicked him so hard it drew blood through his jeans.

This was not the gentle man Marilyn had married nearly 50 years earlier. Disease had taken him away and left her with the heartbreaking responsibility of caring for the angry shell left behind.

Mike had once been a choral music teacher, a tenor soloist at First Presbyterian Church of Hollywood and later the music director at Unitarian Universalist Society of Sacramento. “He was a great model for me because he never put music second,” says Marilyn. His example had given her the confidence to pursue her own career as a writer as well as an educator. Their first 38 years together had been enriching and fulfilling.

Marilyn first started to notice changes in 2005, when Mike was 65. He was growing more self-absorbed. Less observant. Increasingly forgetful. There was that panic attack he had while performing at Walt Disney Concert Hall. He developed verbal tics and complained much more than he used to. His previously sporadic bouts of depression had become a perpetual cloud over their marriage. It was as if he didn’t care to know her anymore. Marilyn knew something was wrong but didn’t know why.

In 2008, a new symptom appeared. While giving a toast, Mike lamented he’d been living in Florida when their daughter had graduated from high school. This was not true. Though he wasn’t her birth father, they’d all been living together in Los Angeles since she was 9. The next morning, Mike insisted on his version of events and resisted Marilyn’s insistence he see a doctor, swearing, “There’s nothing wrong with me!” But eventually, with the added cajoling of their son, he gave in.

The MRI looked fairly normal to the neuropsychologist, who initially ruled out Alzheimer’s and bipolar disorder and took Mike’s distractibility to be a symptom of chronic undiagnosed ADHD. Marilyn was glad to cling to the hope lent by that relatively benign ruling, but a year of Ritalin and cognitive therapy didn’t help. It took a second opinion and additional testing to arrive at the conclusion that Mike was suffering from frontotemporal dementia.

Dementia is a broad category of diseases that cause gradual decline of the brain and its abilities. Symptoms can vary and overlap among disorders and patients, which sometimes makes diagnosis difficult.

Alzheimer’s disease is the most common, comprising about 50–70 percent of all dementia cases. Its underlying causes are not universally understood, but it involves a buildup in the brain of a protein-based plaque called beta-amyloid. In addition to the classic memory deficits, sufferers of late-stage Alzheimer’s are prone to wandering, irritability and emotional outbursts.

Vascular dementia makes up about 25 percent of dementia cases and is caused by problems in blood supply to the brain, typically from minor strokes. Patients with vascular dementia tend to have better recall than their Alzheimer’s counterparts but have more trouble with motor skills such as walking or swallowing.

Lewy body dementia is related to Parkinson’s disease and makes up about 15 percent of all cases. Its symptoms include fluctuations in alertness, visual hallucinations and physical rigidity.

Frontotemporal dementia—Mike’s diagnosis—is less common overall, but accounts for 20 percent of young-onset dementia. Symptoms include apathy, blunting of emotions and deficits in both expressive and receptive language.

There is also a sizable list of uncommon but equally devastating neurological disorders causing dementia. None have any known cure.

Shawn Kile, M.D., is a cognitive neurologist and medical director of the Sutter Neuroscience Institute Memory Clinic. A large proportion of his patients are sufferers of dementia. Some come to him when they first notice a change in their memory. Others might be brought in by family members after years of “just getting by.” Those seeking answers often fear what they might learn.

A first visit to the Memory Clinic might involve cognitive testing, brain imaging and a physical exam. “The second visit is usually the tough one,” says Kile. “Giving someone a diagnosis of something like Alzheimer’s is one of the hardest things I have to do in my profession.” However, Kile places an emphasis on making things better by managing the factors within one’s control. He may prescribe medications to improve sleep or stabilize symptoms, though there are currently no medications that affect the disease itself.

So what are the chances of becoming a victim of dementia? By far the greatest risk factor is age. Nearly half of those over 85 will suffer from it. Another risk factor is heredity. The widespread availability of genetic home-testing kits like 23andMe enables people to see whether they carry the ApoE4 gene, which is associated with increased risk for Alzheimer’s. However, Kile is quick to point out that carrying ApoE4 is by no means a guarantee you’ll suffer for it. “It only accounts for about a 7 percent increase in risk,” he says.

You can’t do anything about your age or your genetics. However, it turns out there is a lot you can still do to protect yourself. Just last year, The Lancet published a breakthrough report authored by a commission of 24 international experts. The report began with a dire warning that dementia “is the greatest global challenge for health and social care in the 21st century: Around 50 million people worldwide have dementia and this number is predicted to triple by 2050.” However, the report identified nine modifiable and hugely significant risk factors that, if addressed, might prevent more than a third of all dementia cases. They include:

Education—Lower levels of childhood education were associated with lower cognitive activity, which is recognized as one of the most significant indicators, contributing about 8 percent of the risk of developing dementia later.

Exercise—A lack of physical activity was shown to be responsible for 2.6 percent of the risk of dementia onset.

Hypertension, type 2 diabetes and obesity—These three are somewhat interlinked, and each adds one or two percentage points of risk.

Smoking—Smoking tobacco was found to contribute to 5.5 percent of the risk of dementia onset.

Depression—It’s not clear whether depression is a cause or a symptom, but its presence was found to contribute 4 percent of overall risk.

Lack of social contact—Isolation also increases the risk of hypertension, heart conditions and depression. It was found to contribute to 2.3 percent of the risk of developing dementia.

Hearing loss—This was one of the more surprising findings. Hearing loss may add cognitive stress to an already vulnerable brain and increase feelings of social isolation. Left untreated, it could be responsible for a whopping 9.1 percent of the risk of developing dementia.

These risk factors can be mitigated throughout life. Kile believes in empowering patients to do all they can to prevent or slow the progress of disease. “Especially for those with mild cognitive impairment, I help them to be proactive,” he says. “I encourage them to exercise and to eat foods thought to be good for cognitive health. We also review clinical trials of medications going through the FDA approval process—drugs that aren’t just addressing symptoms but that are potentially disease modifying.” Taking this kind of action helps patients feel some degree of control, says Kile. “That hope is therapeutic in itself.”

In the case of Marilyn and Mike, the frontotemporal dementia diagnosis launched a years-long search for a residential facility that could not only provide appropriate care for Mike but also handle his outbursts. A big part of that decision process included finances. The stock-market crash had already put a serious dent in their retirement savings, and assisted living facilities are expensive. The first one they tried cost $3,800 a month. They went through several others like it. Mike’s hostility frightened staff and residents wherever he went.

This took a terrible toll on Marilyn. What should have been their golden years had become a thankless, grueling chore. A Stanford University study reported that 40 percent of family caregivers for Alzheimer’s patients–who can live 10 to 15 years with the disease–die from stress-related disorders before the person in their care does. Caregivers often experience their own mental health problems such as depression, anxiety and substance abuse, along with physical health problems.

At the Sutter Neuroscience Institute Memory Clinic, the staff recognizes that caregivers need help just as patients do. Family members meet with a social worker from the first appointment and are encouraged to seek additional resources. Throughout the country, Alzheimer’s Association and organizations like it offer support groups and guidance on all aspects of dealing with dementia.

Though the challenges are daunting, Kile hopes to banish the misconception that “nothing can be done.” He points to advances in imaging—including retinal scans—that are helping to identify disease and intervene earlier. There are even clinical trials for those at highest risk to treat the root causes of disease before symptoms even arise. There is plenty of reason for optimism in the years ahead.

The promise of medical advances, however, did not arrive in time for the Reynoldses. In 2014, Mike was wasting away to the point where he qualified for hospice care. Marilyn got a call one night suggesting she come visit right away. Hours later, he drew his last breath. “I was glad I was able to be with him,” says Marilyn.

Afterward, Marilyn wrote the book she wished had been available to her. “’Til Death or Dementia Do Us Part” was published last year by Sacramento’s own River Rock Books. Marilyn will read from it and discuss her experience at Sacramento Poetry Center on June 11 at 7:30 p.m. For details, visit sacramentopoetrycenter.com. How Their Gardens Grow: N’Gina Guyton

Photography by Debbie Cunningham - September 30, 2020
Near me
40 miles