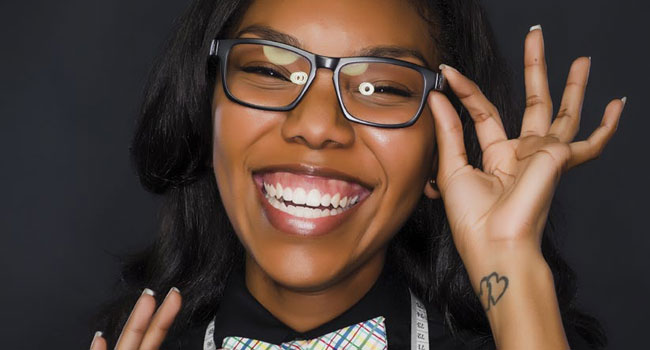 Whether you’re trying to channel James Bond or Pee-wee Herman, bow ties are all about making a statement. They can even be fashionably subversive, according to Damoneax Byrd-Salas, who produces the classic menswear accessory by hand under the label Damoneax B. “I think people who wear them are quirky and risky because bow ties aren’t the norm,” explains Byrd-Salas. “When people wear them, it’s like they’re a rebel in a way.”

Byrd-Salas made her first bow tie for a friend who was required to wear them on the job. Never mind the fact that she had never really sewn before. She bought an inexpensive Disney sewing machine, watched a few tutorials on YouTube and got to work.

Byrd-Salas, whose day job is in the medical infusion industry, makes the ties from her home in Oak Park. She sources fabric from local stores, where she hunts for materials with unique patterns and textures. “I used cotton when I started out because it’s easiest to work with,” she explains. “I’ve also started to work with silk, but it’s a little tougher to work with.” Her hands-down favorite? “I love corduroy. Not a lot of people make corduroy bow ties.”

Damoneax B. ties aren’t just for gents. She has attracted a few fashion-forward female customers and even has a Little Beau line for children. “I get a lot of moms who buy the toddler ones,” she says.

“I want to grow my men’s accessories to include lapel pins and pocket squares. From there, I hope to grow into a whole bespoke menswear company,” says Byrd-Salas about the future of her fledgling label.

Damoneax B. ties are sold online at squareup.com/market/damoneaxb and at select craft fairs in Sacramento. Adult ties start at $35; children’s ties run $5 to $15.