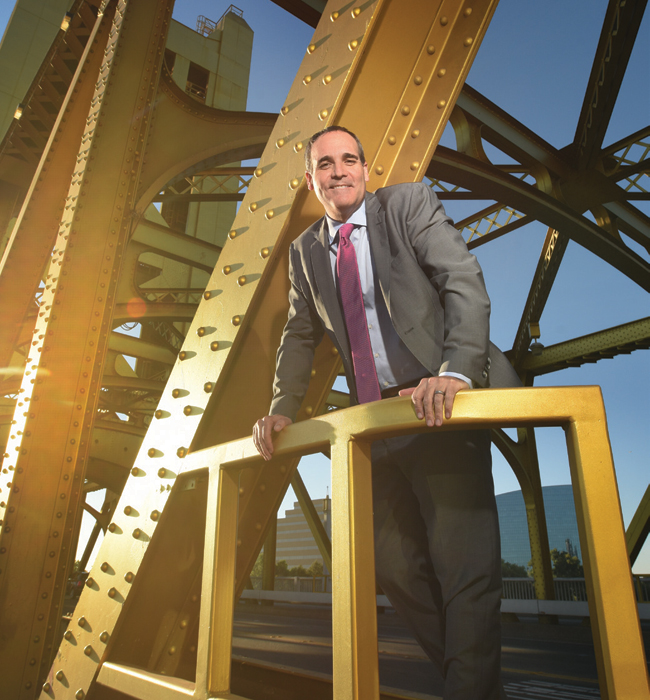 If every year around this time you get frustrated because you weren’t fast enough to get tickets to the Tower Bridge Dinner—they go so fast you practically have to timetravel backwards to snap them up—at least we found someone you can blame for creating this wildly popular gourmet food fest, the highlight of the region’s Farm To Fork Festival: Mike Testa. He’s the guy who actually thought it up, though a handful of people who were simply in the room at the time may claim otherwise. This is the nature of great ideas.

On July 1, Testa—who’s 48, married and the father of a 7-and 5-year-old—became the president and chief executive officer of Visit Sacramento, the rebranded Sacramento Convention & Visitors Bureau. It was run for 18 years by Steve Hammond, who, when he decided to call it a day, inspired a tsunami of candidates to replace him. “There were 32 applicants,” Testa says late one afternoon in his agency’s downtown conference room at 16th and I streets. “Twelve people were interviewed by phone. Then the panel narrowed (the field) to four, then to three.” He smiles. “Nobody can say they handed this to me.”

It might not have been a bad idea if they had. By the time he won the top job, Testa had worked for what used to be called the Sac CVB for 16 years, in increasingly responsible roles. “I don’t think there’s a job here I don’t understand or wasn’t exposed to,” he says. “And even as I went up the ladder, I never really let go of the previous job’s responsibilities. Sometimes, I was doing several jobs at once because they didn’t always replace me in a timely manner.”

The bureau is tasked with booking conventions, conferences and trade shows at the Sacramento Convention Center (and area hotels) that will occur at least 18 months from when the contracts are signed. The convention center itself, a city hall operation—unlike Visit Sacramento—books the local and regional events that will occupy the facilities within 18 months of signing.

So what’s the deal about the fifth annual Tower Bridge Dinner on Sept. 24? “Well,” he says, “the first year we sold out in eight hours. The third year, it was, literally, 15 seconds.” Talk about fast food!