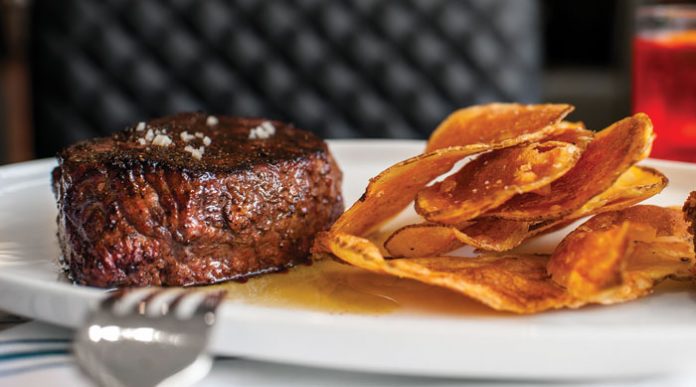 With Echo & Rig, a swanky new steakhouse inside The Sawyer hotel, Sacramento gets another first: a celebrity-chef-driven Vegas restaurant.

The celeb chef is Sam Marvin, an American who studied at Le Cordon Bleu in Paris and worked in France for Georges Blanc and Roger Verge. He returned to the States and made a name for himself in LA, opening two restaurants, Modada and Bottega Louie. He even did some TV, appearing on “The Tony Danza Show” and “Beat Bobby Flay.” (Spoiler alert: He beat Bobby Flay.) After selling his stake in Bottega Louie, Marvin opened the original Echo & Rig, a steakhouse with an in-house butcher shop, in a Vegas suburb. A couple of years ago, a Kimpton Hotels executive approached Marvin with a proposition: The boutique hotel chain was opening a hotel in downtown Sac next to the new Golden 1 Center and needed a restaurant for its lobby. Marvin came to town, toured around and decided our city was ripe for development. “It felt like Portland or Seattle 10 or 15 years ago,” he says. “I was excited to get in on the ground floor.”

Set in a corner of the hotel, Echo & Rig has two walls of glass looking onto the lobby and the plaza outside. Inside, it’s sleek and unstuffy, with gray Venetian plaster walls and lots of stone, wood and leather. One wall is covered in small wood tiles that are meant to subtly remind you of butcher block. In a departure from the classic steakhouse menu, Echo & Rig offers more than just the standard cuts (filet, New York steak and rib-eye). Marvin calls them “new generational steaks” or butcher cuts: hanger, bavette, skirt, Spencer, rib-eye cap, flat iron, tri tip. Meats are cooked on a grill over California red oak, which doesn’t impart a heavy flavor the way mesquite and hickory do. There are more than 60 items on the menu, including plenty of seafood options and almost two dozen small plates—things, like grilled octopus and potato gnocchi with mint-pea pesto, that are light-years from standard steakhouse fare such as shrimp cocktail and creamed spinach. In a fun nod to old-school steakhouses, large, bone-in steaks like T-bones and porterhouses are priced by the ounce and brought raw to the table for inspection before ordering. Weighing in at 28, 34 or 42 ounces, they’re meant to be shared. Butchering is done in-house, and every part of the animal gets used, from the fat to the bones. (At the Vegas restaurant, large femur bones occasionally go to Siegfried & Roy’s tigers.) In its pricing, the restaurant is positioned somewhere between Morton’s and Outback. At $39, the filet, New York and rib-eye are the most expensive steaks on the menu. Most cuts cost less than $32. Other value propositions include no corkage fee and gratis water, both still and sparkling.

Servers are seemingly everywhere at Echo & Rig. Providing great service is part of the restaurant’s culture, says Marvin. He studied the business greats (Apple, Southwest, Google) and came up with the phrase “intents of service.” It sounds like “intensive service” when he says it, and it sort of is. Servers have a mental checklist of seven tasks (“intents”) that they must perform to make customers feel like royalty. According to Marvin, intangibles like a thoughtful playlist or a waiter who thanks you verbally for your tip turn diners into repeat customers. “I’m in the experience business,” he says, “not the restaurant business.”