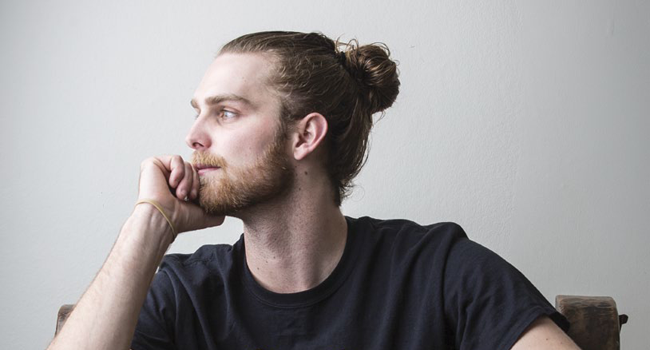 Who wore it better? David Beckham or Buddha? And who should we credit with the trend: samurai warriors in 17th-century Japan or Jared Leto in 2014 Hollywood?

Whatever its origins, the man bun has finally found its place in the sun: knotted atop the male dome. Urban Dictionary calls the do “a questionably sexy hairstyle,” and rightly so. Until now, there’s never been a more contentious cut, over which its backers and detractors vehemently split hairs.

Barber Thomas Edward Adams III, who works at Jimmy’s Barber Garage in midtown, sees his share of male ’tails. “I think what really gives the man bun its popularity is a certain level of androgyny,” he says. Which may explain why opinions vary on the hipster top knot: People aren’t sure what to make of it.

That hasn’t stopped people from feeling strongly about the hairstyle, though. Says Devin Wallner, who works as a bar back at Firestone Public House, “Nobody even knows my name. I’m just Man Bun Guy.” Some people, mostly men (friends, strangers, even his father), make fun of him. But then the bun does seem to attract women. “I never thought I’d see the day where just my hair would get me a date, but I guess times are changing,” he says.

The irony is that many men like Wallner weren’t trying to be trendsetters. Their hair got long; they put it up. Story over. With few variations other than shaved sides and a complementing beard, the do can only be done simply, and it’s a pain to grow out.

“The man bun doesn’t get versatility at all,” says Adams. “I guess now the man braid is in, but I don’t know many guys who can even braid their own hair.”

The real problem with the man bun, suggests Adams, is that the trend is already starting to wane. “The moment it was coolest, 90 percent of the guys who wanted them didn’t have hair long enough to do it,” he says. Once they’ve grown their hair long enough, the man bun will be done. “It was doomed for failure.”

That shouldn’t stop you from sporting a bun if you want one. “I encourage people to do whatever they want,” says Adams. “Life’s too short to have boring hair.”