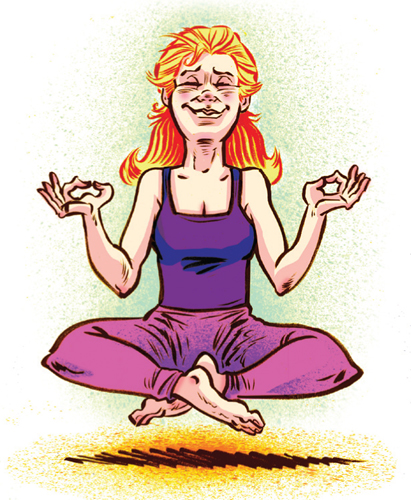 Want to know the best way to suck at meditation? Volunteer to write an essay about it. I suppose there are more efficient ways to suck at it, like not trying at all, but taking a practice intended to clear the mind and making it the focus of an intellectually introspective task has got to be in the top three ways to ruin it.

It was my 2017 New Year’s resolution to meditate for at least 10 minutes every day, and, as New Year’s resolutions often go, I made it about 10 days before faltering. The hope behind the resolution was to strengthen my ability to stay focused, an essential job requirement for my work as a writer and one growing increasingly anemic in the face of a steady stream of emails, social media notifications and text messages that distract and disrupt me, often beckoning me down a rabbit hole that only further removes me from the task at hand.

As a fitness instructor, I understand that consistent practice is how we make the muscles in our body stronger and more endurant, and based on anecdotes I’d read about everyone from The Beatles to Oprah to the world’s most successful hedge fund managers, it seemed like meditation is a way to work out the mind. I figured if I could force myself to sit still and practice keeping my mind focused on one thing—or nothing at all—for 10 minutes a day, maybe my mind would get stronger. Maybe when I hit a spell of writer’s block I’d be better able to keep staring at the blank page with an open mind instead of being so quick to take a break to check email, which leads to RSVPing for that birthday party, which leads to buying a gift on Amazon, which leads to comparing juicers because I’d love to make my own juices at home instead of spending $10 a pop, which reminds me I need to cancel that monthly activewear subscription service because I don’t need to be spending $29.95 on that every month, too, and oh my gosh, how have two hours gone by since I last looked at that blank page? Maybe meditation could save me from myself, one resisted distraction at a time.

I started with an app called Headspace, which forces users to complete a 10-day intro series of 10-minute guided meditations before allowing access to a full library of various meditation resources. The app is user friendly and streamlined, taking a straightforward approach to meditation as a stand-alone practice without any spiritual stuff or sponsored upsell attempts, which I appreciate. There are a couple of animated lessons within the 10-day intro, including one that depicts meditation as standing on the side of a busy road while simply watching the cars pass by. The cars represent thoughts, of course, and I am comforted to be assured I don’t have to rid my mind of them completely so much as just stop chasing them for a while; just accept their passing by and let them keep driving while I remain steadfast, out of the way of their traffic.

I like the app, but I’m not sure it’s “working.” A month in, with decent-but-not perfect daily participation, I don’t feel mentally stronger. I often fi nd myself keeping mental notes of how it’s going, the bizarre thoughts that pop into my mind, and the rare moment of clarity or insight. I’ve pitched an essay about meditation and by now I can’t help myself from mentally writing it during each session. Keeping mental notes feels like the opposite of what I’m supposed to be doing, though.

Maybe I need a real person to guide me instead of an app. A cursory Google search indicates weekly meditation gatherings can be found at Sacramento Dharma Center, Trinity Episcopal Cathedral and a handful of yoga studios. I opt for the yoga route since it’s the most familiar for me and I’m suspicious that my ability to turn off my mental stenographer will be even weaker in unfamiliar surroundings. I go to Zuda Yoga at 5:30 a.m. on a Thursday and sit in a dim room with 20 or so other people in mostly silence. The yoga teacher who will instruct the following 6 a.m. class sits in the front and offers a couple pointers (“Where your mind goes, your energy will flow”), but for the most part it’s unguided. I count my breaths like the Headspace app taught me. I don’t know if I’m doing it right. I write a few sentences in my head while I sit there, then chastise myself for doing so.

I go to my regular yoga class at Arden Hot Yoga the following week with an old friend who is visiting from out of town. Although nothing about the class is billed as meditative, the teacher instructs us all to commit to a mantra at the beginning of class. It can be a single word, a sentence, something in Sanskrit (like I know anything in Sanskrit), anything that we can continually bring our mind back to; it’ll help us fi nd focus throughout the class. I choose the word abundance, because I keep seeing it pop up and catch my eye in various things I’m reading lately and it’s rattling around in my head whether I like it or not. As we move through the class, I feel gratitude for the abundance of health and provision in my life, and a desire to use what I’ve been given to better serve those around me. I link these feelings to the movements, offering as I raise my hands above my head and gratefully receiving as I pull them back down to my heart. Between listening to the instructor so I can keep up with the movements and repeating my little mantra to myself, there’s not much mental space left for note taking.

After class, I turn to my friend and ask what her mantra was, not sure if you’re allowed to share a mantra or if it has to be kept secret, like a wish made while blowing out birthday candles, in order to retain its power.

“My mantra was the word abundance,” she says. “Me, too,” I respond, somehow not completely surprised.

Maybe I’m not doing it right, but maybe there isn’t one “right” way to do it. I still don’t feel much mentally stronger, but I suppose these things take time. I’ve spent decades filling my mind with thoughts and concerns and notes, gathering data and formulating opinions and perpetually writing stories in my head. I suppose learning how to take a respite from that, even just for 10 minutes, will likely take longer than just a couple of months to learn. But perhaps accepting that, perhaps extending myself that grace, is part of the process. Perhaps that’s a kind of mental strength I didn’t know I needed to learn but has to come first. Maybe it is working.