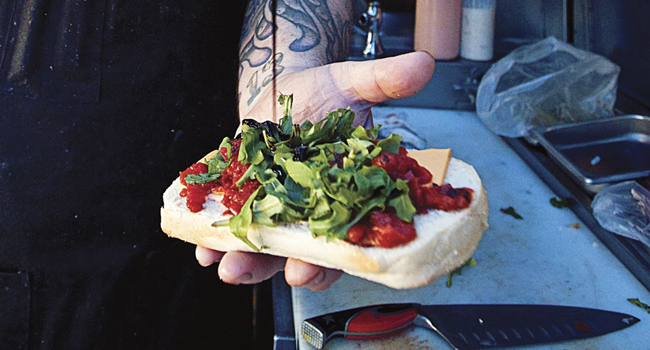 Keith Breedlove is a food truck operator whose outlandish burgers (like one with bacon and peanut butter on an apple fritter) attract culinary thrill seekers wherever his Culinerdy Cruzer is parked for business. But don’t let those quirky burgers fool you: Breedlove is as serious a chef as any. And he’s got the credentials (and tattoos) to prove it.

Your food truck is called The Culinerdy Cruzer, but you hardly look the part of the nerd, with your tattoos and goatee.
When it comes to food, I’m a big fan of food science—not just molecular gastronomy but the science behind food. I’m into food like a Trekkie is into “Star Trek.”

Your late grandfather, Papa Dale, was a big influence. What would he think of your food truck?
He would just be so proud that I’m putting myself out there and I’m doing it my way. He was always a big supporter of me.

It’s safe to say that cooking is an obsession of yours.
I have Asperger’s. I’m on the autism spectrum. So for me, when things become a fascination, it’s 100 percent. Food and cooking have been my life since I was 16.

How else does living with Asperger’s enhance your work?
Because I don’t think like a normie, it helps me with finding solutions. You always hear about people saying to think outside the box. Well, I’ve never lived in a box. For example, I’ve baked cakes on my flattop grill. I do so many things on a food truck that so many people can’t do because of the limitations of the equipment. I find a way to make it work.

You’ve cooked in several corporate-style kitchens: Nordstrom Cafe, Hilton, DoubleTree, Crowne Plaza. The food truck must be liberating, no?
It is extremely liberating. I have run multimillion-dollar food operations, but in my heart I’ve always been just a simple cook. Now I have the freedom to have a life but also express myself through food. And I have a 7-year-old son who I get to actually see now.

For you, what’s the distinction between a cook and a chef?
I’m very proud of the fact that for 14 years, chef was the title on my paycheck. I have chef tattooed on my hand. It is who I am. The chef is the one in charge. So yes, I am the chef. But the bottom line is that I’m a damn good cook as well, and I’m very proud of that.

You’re pretty vegetable heavy for a truck that serves such decadent burgers.
I love cooking plant-forward. We do some pretty over-the-top burgers, but at the same time we do these great flash-fry green beans and Brussels sprouts. I’m gonna clog your arteries if that’s what you choose, but I also have stuff that’s better for you if that’s what you want.