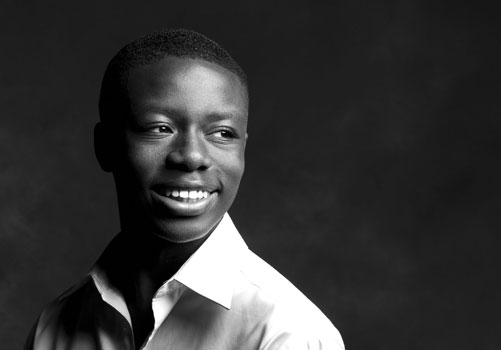 Martin Kyalwazi loves the challenge of entrepreneurial enterprise but can’t shake the inspiration he found six years ago in a movie called “Gifted Hands: The Ben Carson Story.

The film tells the true story of an African-American youngster who overcomes indifference toward academics to become a renowned neurosurgeon. “My parents run a cafe, so they’re entrepreneurs. I love business, but I’m going to be a neurosurgeon,” he says.

The aspiring brain surgeon has a dramatic flair. He performed in productions of “Hello, Dolly!” and “Romeo and Juliet.” He plays club soccer and helps classmates as a California Scholarship Federation tutor. His proudest achievement is one familiar to generations of young men. “This year, I became an Eagle Scout,” he says. Mallory Shingle can skip the general discussion about career choices. She already knows her perfect job. “My dream is to be United Nations medical director,” she says.

A career blending politics and medicine would be ideal for Mallory because she’s the rare high school senior who occupies the intersection of political science and medicine. She loves both, as demonstrated by internships at Stanford University Medical Center and with Rep. Ami Bera’s congressional campaign.

Raised in a Spanish-speaking household, Mallory mastered English fluency in school. She enjoys volunteering as a translator for River City Food Bank, learning about municipal government with the Sacramento Youth Commission and serving as a mentor for classmates.

She’ll choose among UCLA, USC, and Columbia and Georgetown universities. Edwin Rivas is a numbers guy. “I can’t explain it, but I’ve always loved numbers,” he says. “That’s why I want to be an accountant. I want to help people improve their businesses and lives with numbers.”

A math tutor for middle-school students, Edwin recognized some discomfortingly low numbers when he volunteered at a polling site for last year’s elections. “There weren’t many people voting. We have to change that,” he says.

Edwin found value in an eclectic array of after-school activities, not all of which involved math. This year, he picked up a tennis racket for the first time and found himself on the varsity squad. He will be the first member of his family to attend college. He’s leaning toward UC Irvine. Isa Flores-Jones can consider the words of Virginia Woolf and be transported to a solitary land of interior monologue. Or she can sing “What Did I Ever See in Him?” from the second act of “Bye Bye Birdie.” Either way, it’s the thought that counts. “I love literature, and theater is about truth,” she says.

While Isa follows her muse through English classes and five school theatrical productions, from “Birdie” to “Witness for the Prosecution,” she’s also skilled in purely practical matters. As a leader of the Ecology Club, she helped secure a $35,000 grant for her school’s energy-efficient cooling system.

Theater arts workshops fill her summers, but nothing beats a sunlit corner where Isa can sit and contemplate the ideal sentence. “More than anything, I love to write,” she says.

Isa is deciding between Columbia and Harvard universities. Lydia Tahraoui had a tough decision to make: Run for student government or write for “Flash,” her school’s quarterly magazine. “Classes for both were at the same time. I love government and I love journalism, but I chose the magazine because writing is like perfection for me,” she says.

Journalism won the battle but lost the war. After internships with Sen. Barbara Boxer and Rep. Ami Bera, she plans to major in political science and pursue a career in government. “I don’t want to run for office, but I’d love to be a chief of staff working in policy areas that bring social change and justice,” she says.

And there’s the law. She’s a prosecutor for Rocklin’s Mock Trial team, grilling witnesses and impressing judges—real jurists who volunteer. Her favorite part about trials: “Closing arguments,” she says. The 15-4 figure is Laut’s personal record in the pole vault. When Yale’s track coaches saw that number, they came calling. “Once you get over 15 feet, colleges want to know more,” Austin says. “At Yale, you still need the grades to get in, but being recruited for athletics makes it easier.”

Cornell and UC Santa Barbara also recruited Austin, but a visit to New Haven sealed the deal. “The facilities at Yale were amazing,” he says. “I sat in on a class in a room that was straight out of a movie.” A business career beckons the economics major, Eagle Scout, actor, model and musician. And he’s a triplet with a brother and sister minutes behind him. Robert Gonzalez turned to Wikipedia to narrow down his career goals. He discovered a pathway to the stars.

“I’m good at both math and science, and when I took an AP physics class, I was intrigued by engineering,” he says. “So I went to Wikipedia and looked up different categories of engineering, and thought aerospace engineering would be the best for me.”

When he’s not thinking about space, time and motion, Gonzalez enjoys helping classmates work through conflicts. “We’ll sit down and talk it over before things get violent,” he says. “It’s very rewarding.”

Robert has secured a scholarship to St. Mary’s College.