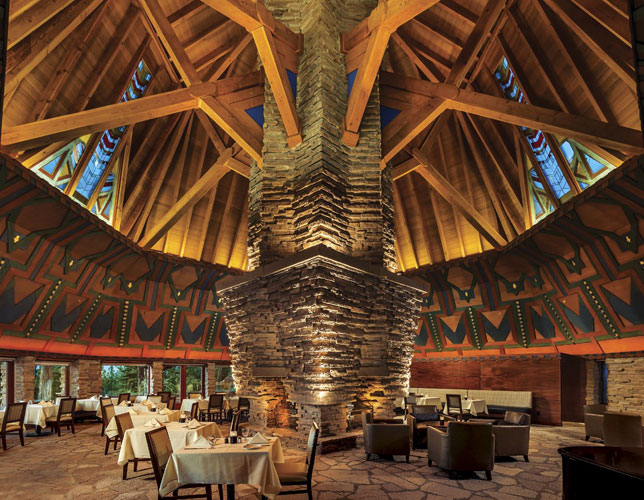 In 1923, when Frank Lloyd Wright was at the pinnacle of his career, he presented designs for a clubhouse to be built at a golf course in Madison, Wisconsin. As with his other groundbreaking architectural wonders, this would not be just any clubhouse.

Wright imagined a geometric roofline and towers inspired by American Indian wigwams fashioned out of cedar and copper. He foresaw exposed beams, low-ceilinged entrances and passageways leading to cavernous gathering halls, as well as a four-sided central fireplace—like a campfire—and stained-glass windows allowing light to dance off the high ceilings.

Construction got underway in 1929 and then suddenly halted because, legend has it, Wright’s notorious philandering—made public by his wife—gave his benefactors pause. There was, after all, a public image to preserve in the new subdivision built at the edge of Lake Wingra where the clubhouse was planned. Wright would move on to other projects, and the clubhouse designs would remain, as the saying goes, on the drawing board.

That is until Dariel and Peggy Garner, who had retired to Plumas County in the 1990s, set about building a resort, golf course and upper-income housing subdivision near the town of Clio. It was 1995 and, for whatever reason, it occurred to the Garners that those clubhouse designs destined for Madison, now more than seven decades old, would enhance their soon-to-be resort.

For six years, and during the 16 months of construction, the Garners worked with the Frank Lloyd Wright Foundation in an effort to accurately adhere to Wright’s vision and oeuvre, right down to the furniture and carpets that would fill the rooms when the new resort opened in 2001. Today, when you drive into Nakoma Resort, tucked into the foothills of the northern Sierra Nevada, you first pass two stunning golden Art Deco statues of Native Americans, images reflecting Chippewa folklore, towering over a lake and fountain. From there, the road leads to a circular drive before Wright’s timeless, imposing Wigwam Room.

In late September, as the first autumn chill finally pierced summer’s long spell, I drove across the forests and dry ranchland that dominate the achingly beautiful Sierra Valley north of Interstate 80. I was partly intent to see for myself Nakoma Resort, captivated as I am by Frank Lloyd Wright’s work. But I was also keen to explore the proverbial “Lost Sierra.” So anointed in a Sacramento Bee article from the 1930s and later the title of a 1973 National Geographic article about the region, it is a rugged mountain landscape separated by the interstate from the rest of the range that circles Lake Tahoe. With its pristine lakes and jagged peaks, this still-wild terrain, I’d heard, is so wonderfully remote that you feel invited to get, well, lost in its untamed beauty, regardless of the season.

I arrived at Nakoma Resort in the evening and, after checking in, headed to the Wigwam Room for dinner. Probably like most guests who enter for the first time, I let my eyes drift upward to admire the criss-crossing beams, stonework and blue, green and yellow chevrons that wrap around the interior, all allowing you to feel like you’re sitting snugly in an Indian teepee. From the fireplace, a warm glow permeated the room, as did candlelight from every table, adding to the effect of sitting before a campfire. Wisconsin’s loss, I mused.

After my light meal of a Caesar salad and warm bread, I returned to my room at The Lodge at Nakoma, which opened in August 2015 and is situated a short drive from the Wigwam Room. Constructed of natural and raw materials, including tumbled travertine, reclaimed wood and stone, and with California native plants and grasses in the entryway, the 42 rooms and minimalist yet comfortable lobby have a decidedly refined feel yet blend well with the hilly landscape. The resort, I read later that evening, boasts one of the most challenging championship golf courses—Dragon Golf Course—in the American West and has won numerous national awards. The course has since been softened considerably, I was told later, by the removal of numerous bunkers and trees, and the greens have been slowed. The Lodge overlooks the eighth green; the next morning from my room patio, and later at breakfast on the Wigwam Room’s patio, I watched golfers slowly zigzagging about in carts, the glorious foothills as a backdrop. At this time of year, the golf course is closed and likely blanketed in snow, with a 5K loop running around it for cross-country skiers and snowshoers. The resort also expects to have tubing on-site.

My activity for that day in September, however, was to scale the nearby Sierra Buttes, particularly since rain—the season’s first—was forecast for the next day. I drove to Gold Lakes Road near the town of Graeagle and, heading south, felt as if I were in the Swiss Alps, what with the ragged spires and deserted lakes. Although I was eager to hit the trail, I couldn’t resist pulling over twice to see the tranquil, crystalline Sardine and Packer lakes, each bordered by quaint lodges and cabins. Then, rounding a bend, the exalted Sierra Buttes abruptly appeared, a humbling image. During the snowy winter months, Gold Lakes Road is groomed for snowmobiling and often teems with cross-country skiers. The Wigwam Room at Nakoma Resort. Photo by Digman Studio.

The day I was there, I was shoulder-to-shoulder with mountain bikers and ATV enthusiasts headed for higher elevation to have fun kicking up dust. But I detoured onto the hiking trail, with its immediate and merciless 1,800-foot ascent, switchbacks and narrow rocky passages, many lined with buckwheat, yellow mule ears and Indian paintbrush. The rewards: unsurpassed views; on extremely clear days, they say, you can see as far as the Farallon Islands.

I could see down to the deep blue Upper and Lower Tamarack lakes, almost 1,000 feet below. Pressing on, I saw Young America Lake before the steep last half mile, which ends at a labyrinth of metal steps wrapping around the base of a lookout tower. Before ascending it, I noted a plaque honoring the laborers who had built the stairs, in essence making it easier for climbers like me to pat themselves on the back for scaling such heights. Standing atop the lookout tower balcony, the floor of which is steel grated so that you can see the spiky rocks below, I held tightly onto the railing as a swift wind picked up. But I was also undeterred in walking the entire balcony, pausing long to take in the stellar 360-degree views.

After descending the Buttes, I drove to tiny Clio, where I’d heard a small, recently refurbished inn offered some of the best pizza perhaps not only in the valley but for many miles beyond. A small sign on Highway 89 heralding Blackbird Inn directed me across a bridge spanning the Feather River, and eventually I found the unassuming but tastefully decorated bistro. Perusing the menu, I let my curiosity get the better of me, and I decided to relax my vegetarian strictures to sample the inn’s pizza with elk salami. It didn’t disappoint, not in the least, I say with apologies to my vegetarian friends and family. I ended this happy day at the inviting spa in the lower floor of the Nakoma, first dipping into the pool lined in a mosaic of turquoise, lime and amber tile, and then slipping into the Finnish sauna, letting the heat soothe my muscles now beginning to ache some from my Buttes expedition.

By late morning, I was ready to hit the trails again, this time along more friendly terrain. Shortly after driving into Plumas-Eureka State Park, I veered off to a small parking lot at the trailhead to Madora Lake. The first part of this flat and well-marked trail—one of several that comprise a maze of cross-country and snowshoe loops—cut across crisp golden ferns and a trickling creek until I had an idyllic view of the shore covered in cattails, with Canada geese and ducks paddling among them. What’s more, the serene water acted as a perfect mirror for an increasingly overcast sky and shifting clouds.

Afterward, at the small outdoor exhibit by park headquarters, I walked among gold-bearing quartz, a well-preserved mineshaft, a rusted-out ore skip and air compressor and crusher at the park’s outdoor mining exhibit. On one placard, I read that two stores, three saloons, a bootmaker’s shop and livery stable at one time had rounded out the bustling gold-mining towns of Eureka Mills, Jamison City and Johnsville. Despite these efforts to make the area more civilized for the miners and their families, the living was indisputably hard, especially in winter.

One way they passed the time was to organize longboard ski races. The first one was held in 1861 at Onion Valley between Quincy and La Porte, with downhill speeds reaching up to 88 miles per hour. Competitors had to climb the hill on foot to the starting line—a tradition that continues today with the Historic Longboard Revival Race Series held near Johnsville on the third Sundays of January, February and March. Perhaps best of all, contestants must dress in 1860s attire as they race downhill on their 9- to 16-foot wooden skis.

The gray clouds that had earlier been circling the horizon were now just above me as I got back on Highway 70 and headed northward, and by the time I turned onto Greenhorn Ranch Road, a light drizzle was falling. But I had a date to keep: When I’d reserved a ride at Greenhorn Creek Guest Ranch, I’d been told the deal was “Come rain or shine.” Open year-round, the ranch is nestled in a hilly clearing and rents 16 cabins and 10 rooms in a two-story lodge, but it limits its horseback riding activities to the warmer months. I therefore felt fortunate that I could still ride, despite the gloomy skies.

Sitting atop A-1, my calm equine companion, I followed ranch hand Hanna Simpson, a spirited 20-year-old from San Diego wearing a plastic pink chrysanthemum pinned to her cowboy hat and riding a horse named Lindona, and we went deep into the woods above Greenhorn. Up and down dusty ravines we traveled, through thick conifer groves and around mangles of manzanita, sometimes moseying away from the marked trails that hikers traverse in summer and cross-country skiers ply in the winter months.

I mentioned to Hanna, meanwhile, that I had spent several months last year roaming the American West in search of women who ranch in remote lands. These modern-day heroines, with their motivation and courage, had intrigued me, as did, according to federal statistics, their increasing numbers, and I had written about this. She listened quietly, then told me of her love for horses and studies in equine science, which initially had led her to, rather romantically, apply to schools in Wyoming. That hadn’t panned out, she said with a tinge of disappointment, and she had then made her way to the Lost Sierra. But, she added, as if reading my mind, she was far from lost here. Quite the contrary: Just like me, she had happily found a secluded, unmistakable paradise.